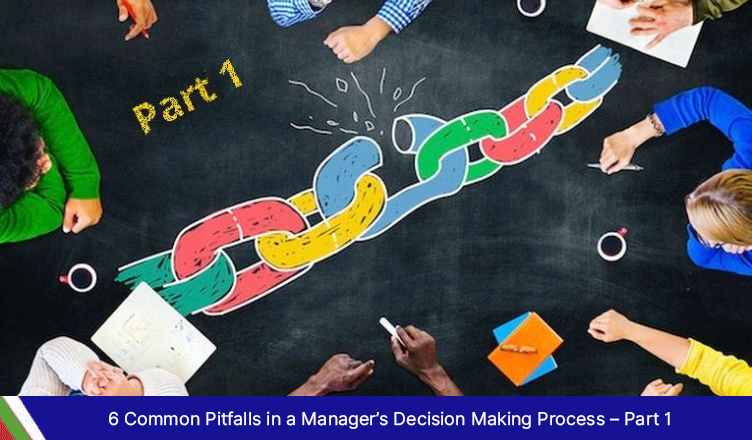 A great deal of a manager’s time is spent in decision making, especially when it comes to employees. However, there are a few trains of thought hardwired into manager’s minds that can hinder objective—and sometimes the correct—decision making process. We’re going to talk about 6 of the most common pitfalls in decision making.

A lot of managers will use existing data as the anchor upon which to make their decision. This is because the mind of the manager automatically provides more weight to the information that they have most recently received. For example, if you have learnt that sales went down by 35%, you might make efforts to improve it by 40%. In other words, your goals and decisions will always be anchored by existing data.

Avoid this by looking at the problem at hand from the view of different data sets and perspectives.

Sticking to What You Know

Another pitfall—and this one is perhaps most common—is the manager’s preference to stick to the status quo. While this may seem like an amiable choice that eliminates costs and time associated with making changes, this is probably not the wisest thing to do in the long run. For example, a manager may continue to work with a low performing employee because they have been in the team for many years, and hiring a replacement will simply take time and resources. Thus, managers stick to what they know.

Yet another pitfall that often results in disasters in decision making is escalation of commitment. This means that even after a manager has realize that a prior decision made was wrong, they stick with it. Why? Because firstly, they don’t want to admit they were wrong. And secondly, because they have put in all this effort in making it, they want to stay with it till it becomes fruitful… which in many cases may be never. For example, firing the employee in the above example would mean that you are admitting to a wrongly made decision in the first place. Which makes you look bad.

Avoid this pitfall by involving people who were not involved in the prior decision. They will have a degree of objectivity to bring to the table and point out problems you may not have noticed.

We shall discuss the other three pitfalls in decision making in our next blog, so stay tuned!