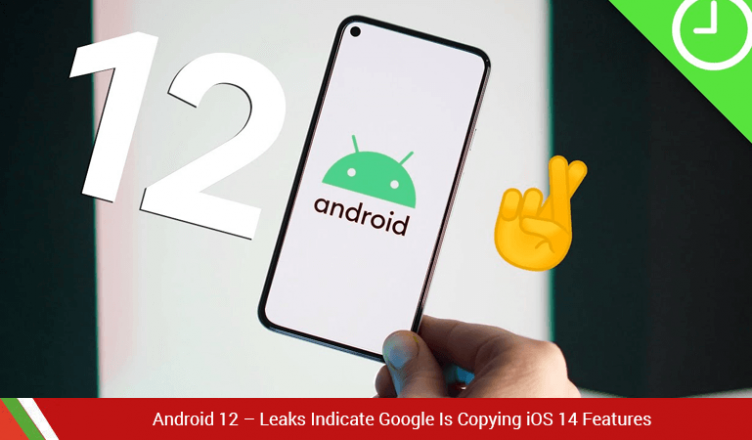 The rivalry between Google’s Android OS and Apple’s iOS is no news. However, with the upcoming Android 12 release, some leaked builds have been seen copying more than one iOS 14 feature.

Apple introduced a user privacy feature in iOS 14 that mainly focuses on notifying the user when an app is accessing their phone’s location, camera, microphone, or clipboard through a pop-up.

Apparently, Google has copied and pasted the same feature with Android 12.

According to the leaks from XDADevelopers, Android 12 might have similar features as its biggest competitor iOS 14. As the source has claimed of using the unreleased version of the upcoming Android OS and figuring that the new features are similar to the ones the latest iPhone provides.

The source further talks about the first feature that will allow enhanced privacy controls to users in Android 12. Revealing once a user enables the “show clipboard access” option in the privacy settings, they will be able to know which apps are accessing their clipboard.

Another feature, related to privacy as well, is where the user can choose to provide apps with an approximate location instead of the exact location when prompted.

Basically, you can give the precise location you are at, the approximate location of where you think you are or even let the app decide to automatically choose from one of these two options on its own.

So far, the source has only uncovered these features to be similar to iOS 14. However, more is yet to come with the Android 12 full release soon.

What More to Expect from Android 12?

Android Central, in its recent post, talks about how Google is developing new features to limit resources to various apps with the latest Android OS release.

So, you can expect to see more features that will stop different apps, installed on your smartphone, from allocating much-needed resources.

As there are tons of apps installed on our phones that we don’t even use regularly. But they are still there. Eating up phone’s memory, storage, and other processing power.

What’s more, they even collect your personal information while being of no use to you.

So, limiting resources to “Unused Apps” will definitely help to make the upcoming smartphones, running on Android 12, much faster, reliable, and secure.

Currently, three developer previews have been done for the masses to introduce the latest Android OS version.

XDADeveloper, reviewing Android 12 developer preview 1, said in addition to the features (discussed earlier) Google has announced some distinctive changes in the upcoming release.

There are going to be several changes like the addition of rich content insertion, multi-channel audio enhancements, Image support for AVIF Codec, Project Mainline through ART, audio-coupled haptic effects, and much more.

While Preview 1.1 was an update on the bug fixes for the first developer preview. So, offered nothing new as such.

Recently, the second preview introduced all the new user-facing (interactive) features. That included:

With the latest preview, Google seems to have lightened the gray color used in its dark theme. The backdrops are a much lighter shade of gray than compared to Android 11’s dark theme, which was almost completely black.

The feature was under development at the time of Developer Preview 1. But with the second preview, the one-handed mode was made live for the public. Users can now enable one-handed mode to easily use an app without having to use both hands.

There’s an automatic timeout option that can be set to 12 seconds, 8 seconds, 4 seconds, or never depending on your requirements.

Yet another feature, now up for use in Developer Preview 2, the swipe-down gesture gives the user the ability to open any app’s notifications after swiping down near the navigation bar. You can swipe anywhere between the gesture navigation bar and the bottom end of the phone’s display.

However, both one-handed mode and swipe-down gesture cannot be used at the same time. Because they are triggered in the same manner.

You can expect XNSPY to keep on working on its services to adapt to the Android 12 release as well. So, the latest release can have little to no effect on our monitoring app.

While the result of the iOS vs Android battle is yet to be reached. No one knows which operating system is going to win. But it certainly will not be the one copying the other.

After all, in the end, only innovation prevails!