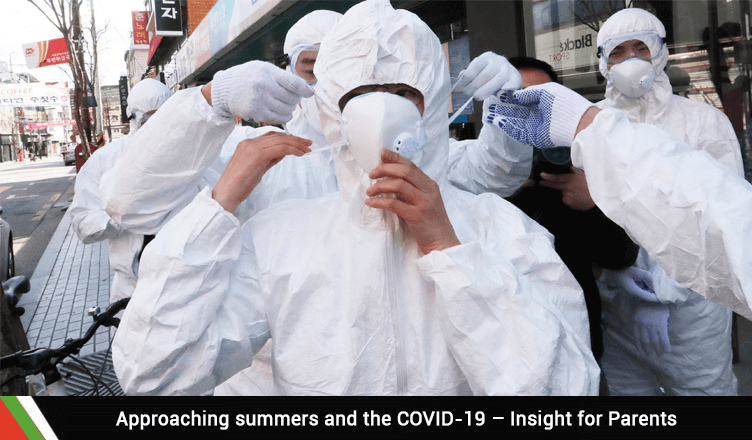 With a vast majority of states having some control on the spread of COVID-19, lifting the lockdowns have led to concerns regarding how the summers are going to be considering the crowds at pools, beaches, and parks. But most importantly, how to ensure the safety of the kids? What are the things that fall within the safe parameters?

To be honest, there is no one satisfactory answer. Why? Because a lot is still unknown about the virus concerning children. Compared to adults, fewer confirmed cases of COVID-19 have been reported in children in China, Italy, and the United States. And fewer seriously ill children. There have been some recent reports of an awful inflammatory condition that indicate that things can still be dangerous.

As for the spread of the COVID-19, it can spread from the kids to their family, and anyone else they might come in contact with. If the children contract the virus and spread it between each other and bring it home as a result, they could put their family at risk and even lead to local outbreaks.

What do the scientists say?

Scientists lack a full understanding of the COVID-19 and its effects on children as yet. There is not a lot of data about it and the places they can acquire it from, such as schools and daycare centers where most children are usually, are closed. The pandemic has restricted kids from engaging in activities and visit the places as they normally do. Thus, providing an unclear picture in terms of the virus spreading in children.

However, some studies do provide insights. Let’s take a look at them:

Compared to adults, children are getting ill less

As said earlier, there is not much data about why COVID-19 could impact some healthy adults and children. But currently, a few cases of severe sickness in children have been reported. According to a pediatric infectious disease specialist at Children’s Hospital Colorado in Aurora, Samuel Dominguez children are doing a lot better than adults and are less sick.

The researchers of the study gathered information from the hospitals for 745 of the children’s cases. Out of these, 147 were admitted to hospitals, and 15 were in intensive care. Three children passed away according to the Morbidity and Mortality Weekly Report (April 10). As of the data from May 23, hospitals have a higher rate of COVID-19 cases in adults than in children.

CDC reports that adults are still getting affected by COVID-19 and admitted to hospitals at a higher rate than children. A recent piece of news that an excessive immune response in some children could indicate COVID-19 leads to increasing concerns. About 8 children with constant fever and gastrointestinal symptoms had to be admitted to the ICU in London in mid-April.

189 cases are being investigated by the New York State Department of Health concerning the inflammatory syndrome. Cases have been reported from Washington, D.C., Florida, Louisiana, and Wisconsin. A health alert has been released by the CDC as well for the syndrome that is being titled multisystem inflammatory syndrome in children, or MIS-C.

Its symptoms are a lot similar to Kawasaki disease that usually affects children under 5. The child suffers from high fever, inflammations, and poor heart functioning in some cases. It is still not clear as to why children are not as much affected by COVID-19 as adults.

The Role of Kids in Spreading the Virus

A 9-year-old boy was exposed to COVID-19 during a family ski holiday in January. After getting infected, the boy showed mild symptoms and did not transmit the virus even after attending different schools. All of the 55 school contacts were tested according to the Clinical Infectious Diseases report (April 11). His two siblings did not get infected either. But influenza was spreading in school and the siblings at that time.

One of the key justifications for closing schools as the pandemic spread was due to past experiences when influenza spread among children. Young children were the main carriers of the flu and closing down schools assisted with curbing the spread of flu during epidemics and pandemics in the past.

So far, what role do children play in spreading SARS-CoV-2 is still not clear.

Studying Australian schools during the early days of the pandemic found that the virus might not spread wildly among students. 18 people from 15 schools in New South Wales were confirmed for COVID-19 from March 5 till April 13. Although 735 students and 128 staff members came in close contact with the initial 18, only two students got affected at school from the initial cases.

As for people stuck at homes, studies found that adults were more prone to get sick in the family. A study from Shenzhen, China, found that children might not be less vulnerable to infection. Children under 10 years of age were susceptible to get infected as much as adults as per the research report as per the Lancet Infectious Diseases (April 27).

The main point that researchers are unable to understand the role children play in spreading the virus is the extent to which the children can get infected and asymptomatic but manage to pass the virus. Adults were studied, and it was found that they can spread the virus even with the absence of symptoms and before the appearance of symptoms.

It is not possible to determine how many children were asymptomatic cases of the coronavirus without large-scale testing. Some studies have made some estimates. In China, 94 out of 728 confirmed cases in children did not have any symptoms, as per a study published in Pediatrics.

It could be a possibility that children are not key transmitters of the virus as they have not been interacting the same way as they would in schools, playgrounds, and daycare centers. Otherwise, children are usually the main spreaders of other virus types.

The approaching summers could provide a lead

Playgrounds and other kid-friendly areas were closed to control the spread of the virus. And as pools and grounds are getting reopened, we still have to see if they would lead to a spike in children. With countries all over the world reopening schools, with conditions and modifications, of course, school systems could provide insight and important data regarding the spread and would it be wise to reopen schools all over.

These plans are going to be executed without a vaccine. Promising candidates would be observed in children to ensure their safety and effectiveness in youngsters. The on-going vaccine trials are being carried out in adults. On the other hand, the University of Oxford has said that it plans to test its COVID-19 vaccine in children.

As a result, both parents and officials are waiting for more information and data along with testing and contact tracing to find out more details about the virus’ spread and how it affects children. Until then, it is going to be a task to decide what’s safe for kids during the summer of COVID-19.