Skip to content
XNSPY Official Blog > Employee Monitoring > Are You Being an Abusive Boss Without Realizing it? 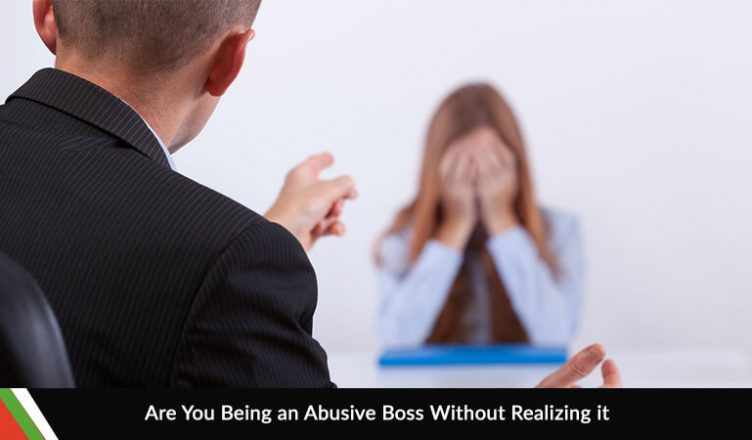 You know what’s worse than getting an earful from your parents in front of your friends? Getting an earful from your boss in front of your colleagues. Think of all the emotions you felt as a child when your parents chose to insult you in front of an audience with whom you had a reputation to uphold. Embarrassment. Shame. Humiliation. Anger. Frustration. You probably felt these emotions all at the same time. Now multiply this feeling by 10. That’s what you’re going to feel as an adult in a workplace where you thought you had a right to dignity and self-respect.

Your parents shouldn’t have done that. Your boss shouldn’t do that. Such public outbursts are nothing but a loud expression of an ego trip that is meant to reinforce the fact that they’re the boss and you’re the employee. These ego trips are perhaps directed toward employees that literally have no way out—they’ve got bills to pay, families to take care of so they simply can’t quit because they have been insulted. Or humiliated in front of their colleagues. Or degrades. Or made to feel like they are worthless and not competent enough for their jobs. Or made to feel like they are easily dispensable and replaceable.

When you do that as a boss, what you’re essentially doing is being abusive. I was going through the stats of this blog and as I found out that the number of managers and business owners who read this blog has significantly grown. I think it would do us all some good if we reviewed our behavior and relationship with our employees and tried to figure out just where we’re going wrong.

It is a Vicious Cycle

There has been a lot of research done on how bad managers can have an impact on employee health, on their personal lives and even the overall performance of the company itself. But not many people focus on how bad bosses impact the employee on an individual level.

Recently, a study was conducted amongst 250 employees in various different organizations. This study would later go on to be published in the Journal of Applied Psychology. The research found that there is a vicious cycle that is created between bosses that are abusive and employees that go out of their way to please them. At first glance, I feel like it makes sense. If you’re sharp tongued with a boss who is for all intents and purposes an arse, you can expect them to be even more horrible to you. However, the study also found something that is counterintuitive. They found that employees that go beyond the call of duty to please their bosses does nothing to reduce future abusive behavior. Bosses who are abusive don’t respond positively to positive behavior. They don’t respond with compassion or empathy at all—in fact, they just viewed all the extra effort as being part of the regular job.

Does this cycle sound familiar to you? Because it really reminds me of anyone who has ever been in an abusive relationship. Sometimes, getting hurt by someone emotionally bonds you to them. Especially when the abuser ensures that their hurtful behavior is intertwined with unexpected little acts of kindness. When someone treats you badly enough, you treasure every little “good” thing that you do. Thus, I feel like what the study found was to be expected—employees will go above and beyond to please the person who has nothing positive to say.

Is it Easy to Get Out?

That being said, is it ever easy to quit your job because you’ve got a bad boss? Perhaps not. Like we said earlier, such bosses direct their behavior towards employees who really badly need the job. Perhaps they’ve got bills to pay, loans to pay back, mortgages weighing down on them… whatever the reason may be, quitting a job is just not a possibility until they find a new job. And that is exactly what the bosses exploit. In such cases, the only thing that employees can do is find a way to combat said boss.

The first thing that employees must understand is that there is no easy way out. Coping becomes hard, especially when you feel trapped. You hate your life in this workplace, but for whatever reason, you can’t leave. So yes, it is not going to be easy. Getting away from the stronghold of an abusive boss with your self-esteem and mental health still intact is no easy feat at all.

You Need an Action Plan

Next, you need to devise an action plan. Start looking for opportunities within the company. It could be so that your department has a bad boss which does not represent the systems of the rest of the organization. Start exploring other options, as is your right.

The other (and perhaps more obvious option) is to speak to your HR about the bad boss’ behavior. I know what you’re thinking—speaking to the HR will essentially make you a snitch. And if that doesn’t bother you, how exactly does one go to the HR and complain about their superiors. How does one even approach the situation? How does one even label someone as their “abuser” without any concrete proof?

One thing that the infographic suggests you do is to prepare yourself with evidence. Perhaps you had an exchange over emails. Keep those emails handy before you step into the office. Perhaps you have evidence of your work. A good idea is to document every incident with dates and specific information so that you do not forget the details when you truly need them.

I suppose the point of this blog is to warn both sides not only to be smart, but also empathetic. There will always be tough days. And there will be days when frustration gets the best of you and you’re not able to cope with all the stress elements coming together. You will want to lash out to each other.

But my message to bosses is: don’t be idiots. You’re not the boss of the person. You’re facilitators of the job. If your employees feel abused by your behavior, you should probably quit.