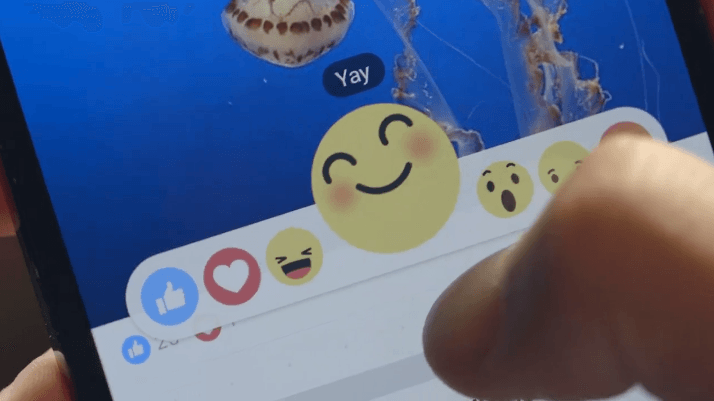 Tired of the sole “Like” button? Afraid that it doesn’t truly capture what you feel about that post? We’ve all been there. Just last week, a colleague of mine posted about the death of his beloved cat of five years. That’s a rather unfortunate and sensitive post to hit “Like” to, isn’t it? Yet so many people do, resulting several cringe worthy experiences. But fear not, patrons of Facebook, your makers have announced New Reactions, available globally. This is what you can expect to see from now on:

Much like the animated movie Inside Out, your emotions on Facebook will have a control room of sorts with 6 dominant emotions. You’ve got Anger and Sadness, Laughter and… “Wow”. And more importantly, if you’ve got feelings about a post that the Like button just does not express well enough, you’ve now got the Love button!

The layout hasn’t changed much. You will still see your beloved Like button at the bottom of every post. However if you tap and hold, you will see the dock for the rest of the emotions. You can then drag and choose the emotion you want. Kind of like this:

This means that the page will not look cluttered, which I feared it might when I first heard about it. You won’t be seeing all 6 buttons out there every time. Instead of listing down the number of likes, you will be able to see the number of reactions. This made me wonder a bit about my social media crazed friends. After *someone I know* has made a post, they keep on refreshing their page until they see the post get to the number of likes they want. If the post does not reach a certain number of likes, they delete it and repost at a time when they feel more of their friends are online. Seems rather stressful if you ask me, and now, they’ll have one more thing to worry about—whether their post has received the desirable reaction. Then again, if you’re social media crazed, any reaction at all should be good enough, right?

Moreover, Facebook hopes that through a wider range of emotions, people can have a more wholesome and “real” interaction on Facebook. Just like it was with my friend and his cat, it just doesn’t feel appropriate to hit the like button, or right an overly formal “condolences” comment. Yet, you feel like you’ve got to acknowledge their tradegy in some way to show support. The FB newsroom believes that including the sadness emotion can help avoid those awkward situations and show empathy at the same time.