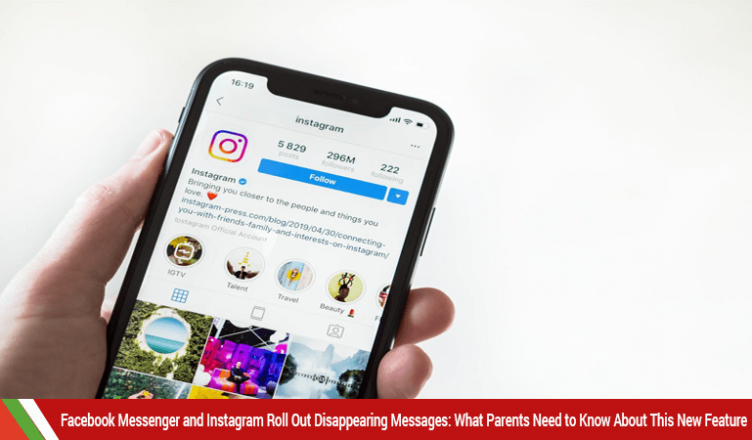 It is said that anything on the internet might be forever but Facebook has other plans altogether. The internet giant has rolled out its “Vanish Mode” on its messaging app and is planning to do the same with Instagram.

But what exactly is the Vanish Mode?

The newly-introduced feature lets users send their messages, multimedia (yes, that includes voice messages), and everything and anything with discretion. And once read, the chat deletes itself. Snapchat much?

The new feature has been forthcoming for a while. Facebook users have been asking the social media giant for a while now. And finally, Facebook has delivered. Modeled after Snapchat’s model, with disappearing messages at the core of its business, it is not surprising that Facebook has followed suit.

The new change will now take place on both of the Facebook holdings (Instagram and Facebook Messenger included). Be as it may, this might pose as bad news for parents worried by their teens sending “risky texts.” But more on that later.

If you’re in the US, Vanish Mode has rolled out for you. And in the coming year, it will roll out in more and more countries. Want to find out if you have Vanish Mode? Make sure your Facebook Messenger is up to date.

Vanish Will Be Coming To Your Country Soon!

According to reports, Facebook is gauging the popularity of the Snapchat-esque feature, you can expect the social media giant to roll out the feature in more and more countries.

The timeline is not set yet but it is expected that the feature will be launched globally in the next few months.

Will Vanish Mode Catch On?

Facebook has an outreach of 1.69 billion users worldwide, making it the most popular social media platform on the planet. This feature is announced after carefully considering Snapchat’s popularity among the younger audiences who love to use the platform’s premier feature—disappearing messages.

Imitation is the sincerest form of flattery. But this isn’t the first time Facebook has shown interest in Snapchat. Back in 2013, Facebook wanted to buy the IM app for 3 billion dollars.

That didn’t work out. So now Facebook is taking on Snapchat by the horns.

Earlier, in an animated video on a Facebook post, the platform announced how Vanish mode is expected to be used. In the same breath, it has implied that Instagram messages can be used the same way too.

Things like short funny expressions and silly chats were shown to be the prime material that the senders could delete. However, the last part hints at sexting and if you’re a parent, it’s another thing for you to worry about.

Minors, especially teens, are no strangers to sending controversial content to whomever they want to. And the newly introduced Vanish mode just makes sending it easier. The false sense of peace of mind it gives to the sender is the more worrying aspect of this exchange. If it’s one thing the internet has taught us it’s this: whatever gets on the internet, stays there forever.

Is Vanish Mode Safe to Use?

No. And there is a good reason why.

If examined on the surface, it seems like a good idea. However, it’s the false sense of security it gives to the users that make it dangerous. And for the uninitiated, such a feature could spell trouble.

For example, teens rank on top of the list of people searching on Google on how to send disappearing messages on Instagram. With Vanish Mode, they might not take enough precautions and assume whatever they’re sending won’t be seen by anyone but the receiver. Trust is crucial when exchanging content online. It may be true that Facebook may notify the sender if the receiver grabs a screenshot. Yet nothing is stopping the recipient from using another camera to take a pic of their screen physically.

There is only one solution: effective parental monitoring.

Find Out What Your Kids Are Up To with XNSPY

Among the many features spyware can offer you, XNSPY offers the following benefits (among many others!)

The first thing that XNSPY does is give you a direct connection with your kids. You don’t need to check where they are from their mouth nor do you have to peek over their shoulders while they use their phones. All you have to do is install our parental control and voila! No need to worry about your kids sending risky Vanish Mode texts.

A benefit of XNSPY spyware is that you can control devices remotely. With an online control panel, you can send commands which do as you ask. You can intercept your kids as it happens, mitigating the damage of disappearing messages.

This is by no means foolproof, but a parental control app such as XNSPY will give you an insight into your teen’s mind and phone. Prevention is better than cure.