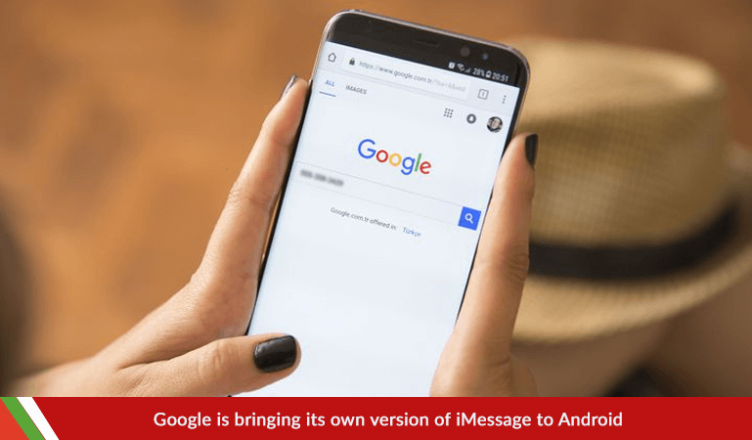 Finally, Google is going to bring an Android version of iMessage. And it is called Chat.

The search giant keeps on proposing cool features to engage its users. Launching in the UK and France later this June, people owning Android phones will be able to pick this new texting service titled Chat. Google Chat is a texting service similar to the iMessage.

Well, the all-new Google Chat is an informal way to text on Android devices. It is known as the Android version of iMessage because it will be the same as that of iMessage. As foreseen, it will read receipts and ellipsis symbols which pops up inside the chat indicating that the person has started typing a message. This way, it will make things simpler to manage. Additionally, Chat will permit users to send messages using Wi-Fi as well. As a result, it will let you easily save cellular data.

In addition, Google Chat will enable users to send high-resolution pictures as well as videos, too. Besides, it is all up to the users as they can easily activate or disable the texting service whenever they need it.

“While we’re pleased with this progress, our goal is to seamlessly bring a modern messaging experience to every Android user around the world, regardless of their device or carrier,” told Google’s product management director Sanaz Ahari in a statement to CNN. The company’s statement clearly indicates that soon more people in other countries outside the UK and France will get access to Chat.

For years, the Android version of iMessage looked like a pipe dream. The idea was based on a wireless standard called Rich Communication Services (RCS) which was deemed to succeed SMS texts. Developed back in 2007, RCS has gotten a limited pickup from carriers for over a decade. During the past year, Google claimed that it was working with carriers and with Samsung to get the protocol working on Android, independent of whether carriers support it. Google is actually implementing a peer-to-peer RCS model. This means, Android users will able to opt-in to RCS Chat service that is directly provided by Google, and they don’t even have to wait for their carrier to support it. This may seem like a minor status check-in on the service which is supposed to substitute SMS, but in fact, it is an immense variation in policy, implying that eventually, RCS will become accessible to all Android users worldwide. Not knowing when RCS Chat will be available for your phone was the second biggest problem faced by RCS, and Google is working to fix it.

RCS’s biggest problem is that chats are not end-to-end encrypted. Yes, the Google Chat doesn’t offer end-to-end encryption as offered by other IM messenger platforms, including WhatsApp, Signal, and iMessage. Lacking this security feature, Google can technically access its users’ messages on its server easily. This poses a serious security concern for all Android users. But there is hope on that front as well, Google may introduce this feature later on, who knows?

RCS is the next generation texting protocol allowing most of the features any user would expect from a modern messaging app:

When users open the Android messages app, the process will opt-in by displaying a prompt to upgrade to RCS. Luckily, all the new phones will be featured with this facility, too. For now, the plan is not to make RCS Chat the default.

All you need to know

If you are an Android user, here’s all you must know:

Substituting RCS with SMS and MMS before carriers are fully equipped to offer their services for the rich messaging standard, Google is going to take advantage of the thriving market for business-to-consumer messaging. Without involving wireless operators, Google can serve as the main point of interaction for organizations looking to approach their customers thorough RCS messaging. For Google, the business-to-consumer market “is an area where there is an opportunity to provide a better experience,” said Sanza Ahari. She added, “given that [SMS] is monetized today, we know that as long as [RCS chat] creates value for businesses, then there is value to be created.”

Surprisingly, according to Business Insider estimates, businesses are anticipated to nearly sextuple (from 4 billion in 2019 to around 23 billion by 2024) how may mobile messages they send to their consumers in the next five years. If Google succeeds in developing terms with companies looking to serve messages to Android users, they could easily gain a share of the valued revenue stream from telecoms, which could be challenging for network operators to recover even after they roll out RCS support.

Later this month, the service will make its way in the UK and France and is expected to roll out soon to all the Android users globally.