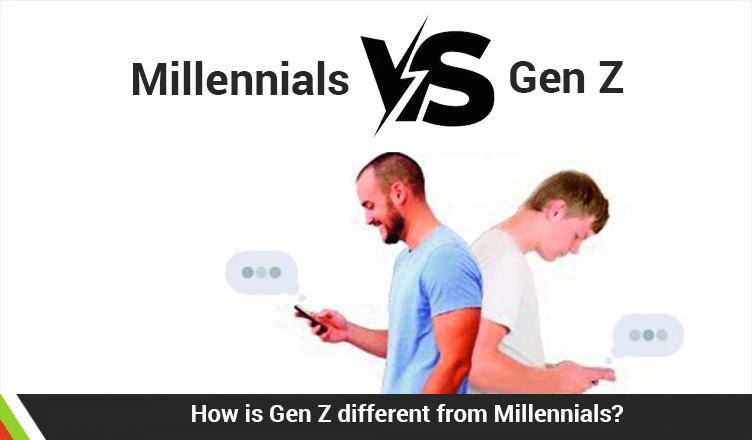 Millennials grew up and began their career in a time when everyone except the third world countries had started using computer and internet. Also, tech giants such as Google, Facebook, and eBay, etc. emerged during the same time. Lifestyles began to change, and things such as freelancing, work-from-home, and flex-time begin to get more acceptance.

On the other hand, Gen Z is still too young and comprises of 25.9% of the population of the United States and contribute to $44billion to the American economy. By 2020, they are going to account for 1/3rd of U.S. population.

Since Gen Z came out, there has been an ongoing debate about how they differ from millennials. To be honest, these discussions never end. Jump back a few years, and you would come across various studies and reports that observed the differences between millennials’ ancestors – baby boomers. Rumor has it that the generation after Gen Z is going to be called Generation Alpha. We’ll see about that.

For now, we are going to look at some key differences between millennials and Gen Z. Gen Z is very different, and it is important to know these differences in behavior and preferences between the two generations so you can prepare your business, shift marketing, recruiting efforts, and even adjust your leadership methods accordingly.

Here is how Gen Z differs from Millennials.

A large number of employers predict that more teenagers (16-18) are going to step directly into professional life rather than getting higher education or finishing school at all.  If a teen of Gen Z knows that he has it in him and is capable of learning something on his own or via unconventional means they would take up the chance and start on early.

What was once taken as amazing technological inventions by millennials, teenagers today take them for granted. Gen Z was born in the digital world. While millennials remember living in simpler times when their entire lives didn’t revolve around technology.

Teens today have higher expectations from businesses, brands, and retailers and expect them to be loyal to them. If they don’t feel appreciated, Gen Z people are going to move on.

The people of Gen Z are big on individuality. 92% of them have a digital footprint due to the media and numerous bloggers, influencers, and celebrities that they follow. They were born in a time when social media had hit it big and impacted our daily lives.

For Gen Zers, individuality is important, and they seek to stand out and be unique via the brands they use and the people they work with or expect to work with.

Both Millennials and Gen Z are avid users of social media. But they use it rather differently than one another. While millennials use social media update Facebook statuses, give brand reviews, and publish online content, Gen Z uses social media from a different perspective.

For Millennials, social media is a place where they can get validation from friends and family about almost all aspects of life. While Gen Z prefers social media apps like WhatsApp and Snapchat over Facebook and Twitter. They spend more time on mobile screens and, compared to millennials, they stream more digital media content than any other generation. A Pew Research survey in 2018 found out that 45% of Gen Zers are almost online all day long with their favorite apps being YouTube, Snapchat, and Instagram.

For millennials, Facebook has enjoyed the rank of the top social media for a long time now but not for Gen Zers.

Also, they can be less focused than their millennial counterparts. They can do so much at the same time from creating a document at school and doing its research on their phones and then finishing it at home while watching TV even. So, Gen Z is quick and efficient in switching between work and play even with plenty of distractions around and work on multiple tasks.

Gen Z is a generation of people that have grown up with an entrepreneurial mindset. The highly connected world has led Gen Z to think and act as entrepreneurs and that, too, from an early age. They wish for more independent work environments. 72% of teens today admit that they want to start a business someday.

Also, these generations have different priorities as well, regarding job satisfaction. A total of 32% of Generation Z wants to find their dream job, and 34% of millennials are seeking financial stability from their jobs. A study also found that a whopping 60% of Gen Z wants to get a job that has a social impact, whereas only 31% of millennials have this mindset.

If you notice, you would find a lot of identifying factors of Gen Z going back to the recession in 2008 such as their more conscious and somewhat frugal approach, and the probability of becoming an entrepreneur.

With the development of the internet, millennials were the first global generation. But as more of the world has become online – Gen Z is going to take over and become more global in their interactions and thinking. Diversity is going to be an expectation of Generation Z. And 58% of adults worldwide in ages of 35+ agree that the children today, the Gen Zers have more in common with their global friends instead of the adults in their own country.

Gen Zers are 25% more prone than their millennial counterparts to say that they are addicted to smartphones, laptops, and digital devices. 40% of Gen Z self-identifies themselves as digital device addicts. As this generation grew up with technology, it is hard for them to go on without their devices.

Millennials are more brand loyal compared to Gen Z and more brand conscious as well. Two years ago, in 2017, 60% of Millennials reported brand loyal purchasing patterns, and on the other hand, 42% of Gen Z admitted having similar brand loyalty. The supporting organization that is parallel with their values greatly dominate millennials’ purchasing decisions even if they are expensive. On the other hand, Gen Z prioritizes frugality, compare the different prices, and then look around to find the best deal.

Now, organizations are efficiently trying to crack Gen Zers brand loyalty code with the implementation of directed marketing campaigns. As this generation spends most of their time on phones and devices, a massive shift is being seen in marketing messages and advertising methods.

Gen Z and Millennials are quite different in various aspects. Gen Z is a more technology-dependent generation with a need to prove their uniqueness and individuality, whereas millennials are more frugal and price-conscious.