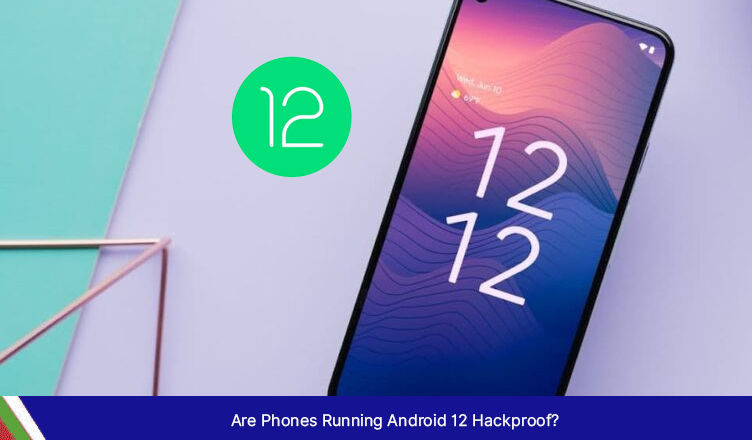 Android has seen its fair share of security flaws over the many years of its existence. A series of 400 security weaknesses have been discovered in over a billion cellphones, turning them into excellent espionage instruments, according to Check Point. The recently revealed vulnerability affects roughly 40% of Android phones worldwide, with 90% of them now on the market in the United States.

The Android operating system and device manufacturers have failed to implement security upgrades, despite publishing them. It doesn’t bode well for Android’s popularity among tech nerds, especially when competing with Apple.

But Android 12 has some neat tricks up its sleeves, which might get people to reconsider and change their perspective on the operating system’s privacy.

So let’s look at Android 12’s security and what improvements have been made over Android 11.

Users will have more customization options in Android 12 than in any previous releases. Fans of both security and aesthetics will be satisfied with this latest iteration.

Google employed color extraction, automatically evaluating which hues are dominating, complimentary, and simply attractive. The colors then get applied over the whole OS, including the notification shade, lock screen, volume controls, new widgets, and more.

Android 12 ups the ante on the interface’s uniformity. It also offers better security options than its predecessor.

The OS has a Privacy Dashboard that lets users see what data the apps are accessing. The new Privacy Dashboard gives users an all-in-one view of their permissions settings. It also delivers information on what data is accessed, how often, and which apps access it. Furthermore, users can now ask an app why it accessed sensitive data.

Google has also added Quick Settings toggles that quickly limit app access to the microphone and camera on compatible devices. The camera and audio streams will be received by an app that accesses these sensors when toggled off.

It should come as a relief to most users. Numerous attacks in the past let hackers access a smartphone’s hardware remotely. Hackers could remotely control the device and access its hardware without the smartphone user’s knowledge.

The OS also introduces approximate geolocation. Apps may now only view users’ estimated position rather than an exact one because of new approximate location permissions. Weather applications, for example, do not require an actual location to provide an accurate prediction. It will provide greater security against location-based trackers and advertisers.

Is iOS safer than Android?

Researchers found high-risk vulnerabilities in 38 percent of iOS applications and 43 percent of Android apps. They found a majority of security flaws common on both systems. The most prevalent problem is insecure data storage, present in 76 percent of mobile apps. Passwords, bank data, personal information, and correspondence are all in jeopardy.

iOS devices can be hacked remotely without the owner interacting with them. Hackers deployed Pegasus to access the iPhones of 9 Bahraini activists and political protestors between June 2020 and February 2021. The researchers discovered similar hacks by the governments of Qatar and Bahrain.

Hackers employed zero-click assaults on compromised iPhones. Zero-click attacks are more advanced than traditional malware attacks since they do not require user involvement.

Thus iOS is not any less vulnerable than an Android device.

Speaking of Pegasus, private organizations have taken charge of the cybersecurity space and building commercial remote monitoring tools. Most people reading this might take a step back and be hesitant around the words monitoring tools. But these are niche products designed for specific needs.

Unlike malware attacks and ransomware threats, remote monitoring tools are not made for malicious purposes or for exploiting people. They are to ensure an organization’s data is safe.

These apps can overcome Android 12’s security protocols unlike any other. Remote monitoring apps make the system think it got installed from within by the device’s owner. So the OS lowers its guard.

The OS will still operate normally and safeguard the phone against external threats like email scams, phishing attacks, malware, and ransomware. An ideal Android 12 spy app overrides the OS security protocols while constantly monitoring the target device in stealth mode.

XNSPY is one such Android 12 spy app. The remote monitoring app protects children from internet scams and bullies by restoring parental authority. Parents can use the monitoring software to review call history and watch their children. Each record displays the duration of the call and the phone numbers and names of saved contacts.

When it comes to social media, children are at significant risk. Using social media platforms such as WhatsApp, Instagram, and Facebook for sexual purposes. Sexual predators are drawn to these sites because they can see many public profiles of young children aged 12 to 16. There may even be younger in some cases.

XNSPY works in the background to protect them via a state-of-the-art instant messenger tracker.

Employers may use XNSPY to monitor their employees to ensure they are not engaging in criminal activities or sharing private or personal information without authorization.

XNSPY also guarantees that workers are only using their emails for work-related objectives and are not utilizing them to register for blacklisted websites. Employers can also look through the emails to see if their employees sold intellectual property to competitors.

Not every Android phone was created with the same security and privacy in mind. Thus some Android phones are more secure than others. Like the Samsung Galaxy S21 series for example. The phone comes with a built-in security suite known as Knox.

The framework is built into the phone’s hardware. It protects the internal environment by isolating any threat it detects. Also, flagship phones and Google Pixel phones are the first to get the latest Android updates and security patches.

It makes flagship phones and higher-end phones securer than mid-tier or budget phones. Original Equipment Manufacturers (OEMs) package their bug fixes and user interface enhancements. However, these are insignificant enough to make an impact. Or they are delivered way too late to stop preventable security hacks.

Thus not all Android phones are equal and those running Android 12 can still be hacked.