Skip to content
XNSPY Official Blog > Parental Control Apps > How to go about a child’s whining? 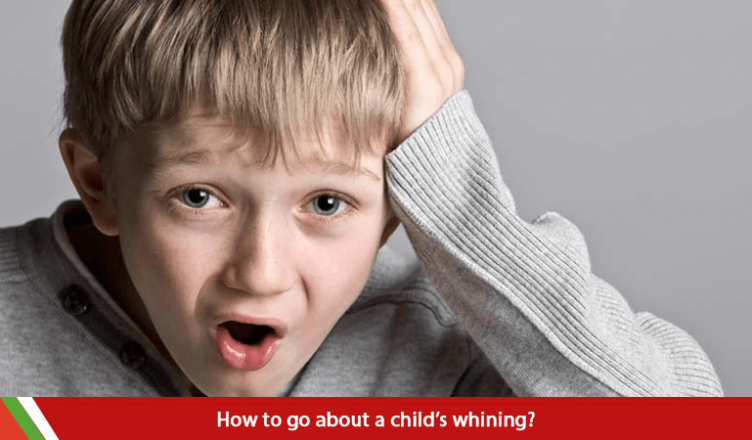 A whining child gets both the parent’s attention and exasperation. Dealing with a whining kid is not any parent would call a pleasant job. That constant complaining tone, the desperate look paired with the dragging of vowel sounds (WHIIIIIIII) are bound to trigger these feelings in a parent:

Kids between the ages of 2 and 4 years old whine the most and research says that parents who have to deal with whining find it way more annoying than heavy drilling, screeching sound on wood, crying and other nail-on-chalkboard kinds of sounds.

When your kid is whining, fulfilling his want/demand might not alter his emotions for a long time. When they are whining, you should know that their emotional climate is cloudy and a storm is just on the way. You might get a few minutes of peace, but your child would soon relapse back into his unhappy state.

The Causes behind Whining

To manage one’s reaction and showing compassion instead of annoyance to the children’s whining, parents have to bear a few things in mind which include science-based reasons behind whining and what do they get out of it.

By learning why your kids whine, you can find ways to put a permanent end to it or lessen its frequency at least.

Here are the causes behind a child’s whining:

Children have it rough too. They are growing up. Each year something changes and certain ages are more difficult compared to the rest.

Children tend to experience flux periods every six months from 18 months of age until they are 6 years old. Later on, this period occurs every other year throughout from the age of seven till sixteen. If you notice children from the age of 7, 9, 11, and 13 face a lot of ups and downs.

This is also the age when usually puberty hits. So, kids have to deal with numerous psychological and physical changes which lead to stress, moodiness, irritability, and of course, whining.

The Temperament of the Child

Every child has his way of expressing and feeling things. Some kids are more emotionally sensitive due to which they everything rather strongly. As children don’t possess the social and emotional maturity to efficiently express what they feel, they tend to whine when it gets too overwhelming for them.

On the other hand, some children are born expressive. They have an intense temperament and tend to share their feelings dramatically, which too can include whining.

The Time of the Day counts too:

Like adults, children also have some times of the day when they function best. As you know, some are morning people, while some are best later in the evening. As for children, their energy fades by late afternoon. After spending a whole day at daycare or school and keep it together, they are needy and tired by the time they reach home. And when they are in their safe space, their home, they just let it out. Hence the whining.

If you think that stress is something only adults feel, you couldn’t be more wrong. Kids feel it too. The fast pace of life, keeping up with things, and running to the next thing to do – all of it takes a toll on the children. They are not yet familiar with phrases, such as Please give me…, or I need…, etc. Quite often, it is that stress we hear in the whining.

If you pay attention, you would see that whining, in reality, is a child’s way to communicate his needs and helplessness. When children whine, they are:

There is always a reason behind a child’s behavior. Whining is also a means of communication. Usually, whining occurs when a child feels that his sense of connection is broken with his child/caregiver. Once children feel disconnected, even the smallest of the task could lead to an overwhelming response such as getting dressed for school when they want to stay in their PJs, brushing teeth, when they want to watch TV and saying goodbye leads to whining.

Showing they have real needs

Whining children have real needs. Though they might not be satisfied with your effort to help them, they still need you. Children function quite well when they feel close to the people they are with, such as their parents, siblings, cousins, grandparents, and friends. Children act confidently when they feel cherished and share a bond with their relations. When they don’t connect with anyone, their behavior becomes wild and out of order.

They are not manipulating you – not always

If you always give in to your child’s whining chances are he might start manipulating you. But that is not the case always. He does not act like this so you could give in to his irrational requests, rather this is his way of showing that he needs your help.

He has chosen something completely irrational so that you can say a firm NO. Then, as a reaction, he would cry and end up shedding all of those feelings. If you are attentive, your kid will not only notice your presence but feel your love as well and as a result – feel much better.

They are not going to have rational feelings

Going to school and coming back home, switching between two activities, watching you busy somewhere else, or having other siblings needing your attention are the various things a child has to go through. It gnaws at his sense that all is good between you (his parent) and him. In some cases, even when parents are warm, involved, and attentive, the child feels disconnected because he feels alone.

Usually, whining happens when playtime ends, or when the two of you spend a good time together doing something your child loves. This ends because, at the idea of good time ending, their feelings of loneliness and helplessness take over triggered by some earlier expense.

The Four R’s to Control Your Child’s Whining

Having determined the causes behind a child’s whining, here are the four R’s to go about it:

The longer you allow your child to whine and complain, the more resolute they would become in getting their way. Children have the stamina to whine for the whole day. Rather than tuning out your child’s whining, help them understand how difficult it is for you to listen to it.

Tell your child that you cannot understand while he is whining. Ask him to use his regular voice. Do not assume that your child is familiar with the effect of his whining. Try doing a demo and whine yourself. Show him how annoying he sounds when he whines.

It is important to get to the root cause of your child’s whining. Is he doing so to get something, or a trying to control a situation? If yes, then get them to do something that relates to the present scenario. Say, they are whining while you are grocery shopping, give them a simple task that makes them feel productive.

If he is simply venting out, as adults do about having a rough day at work, your child needs to express their emotions as well. If he is asking for an extra cupcake, tell him that you fully understand that you want to an extra one, but every child gets one at the get-together. This would not only validate his feelings, but it would also clarify why you are not giving in.

If your child has a meltdown at a store, rather than giving in immediately to avoid the judgmental looks and stares, adopt a better strategy. Ask him to use his regular voice and say please if he wants something. Demonstrate how to do it. After he has done that, respond to his request with a reasoned no or a yes.

If your child asks you for something in a sweet way, without being stubborn, it is the perfect time to reinforce good behavior skills. Appreciate him and tell him how glad you are because he asked nicely.

Even if you refuse his request (such as asking for ice-cream before dinner) and say that you are going to save the appetite for later on if you acknowledge their nice tone, his use of his real voice, likely, he won’t whine the next time. You will be amazed at the results of these handy tips.