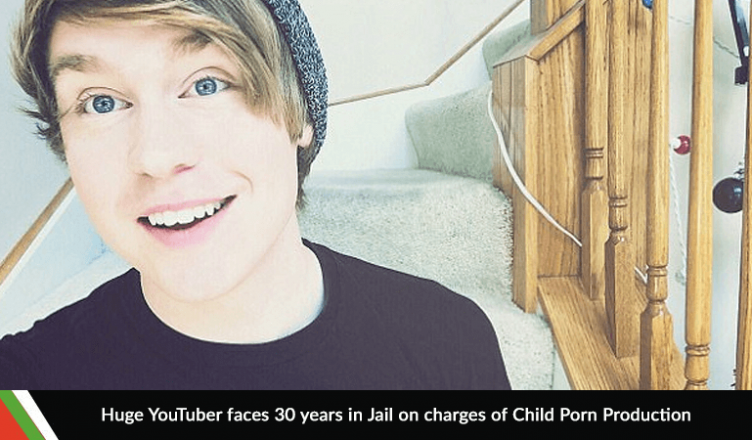 Austin Jones, 24 years old, was a YouTube singer and music producer with over 500,000 subscribers millions of views on his videos. Over the past week, the internet and YouTube community has been rattled by news revolving around Jones and him facing 30 years in prison for allegedly two felony counts( each carrying a minimum sentence of 15 years) of production of child pornography. Jones allegedly used his underage female fans for this by persuading them to prove their devotion to him by sending him lewd and inappropriate videos shot by his direction and instructions.

Austin Jones was arrested on Monday at O’Hare International Airport Chicago after returning from a National tour. He faces charged in front of a federal court on Tuesday.

Many reports have gone over this story on a surface level by merely saying how he was a Youtube and how he faces punishment, but now looking at the unsealed official documents, it is revealed how manipulative and disgusting Jones really was and how he maintained a predator and prey relationship with his victims.

Homeland Security had a videotaped interview with Jones, who waived off his rights to remain silent and admitted to the acts. He told the investigators how “he had been in contact with several underage teenage girls through Facebook” and admitted that he “used Facebook to have sexually explicit chats with those girls”.  He further admitted that he “directed the girls to make sexually explicit videos of themselves and he told them what to do, wear and say in these videos including performing sexual acts while fully knowing that they were fourteen and fifteen years of age.” He requested that “hey send them the videos through Facebook or Apple’s iMessage service, he viewed them and masturbated while he did”

It is important to into the correspondence because it is a lot worse than it really seems, unfortunately. This is not the first time Austin Jones has come under fire for his involvement with minors. Two years ago a petition was started to have his Youtube channel removed because he asked his fans to send him videos of themselves twerking. Jones, even then, admitted to the act and posted an apology video saying that he was embarrassed by the accusations of having underage fans doing suggestive dances at his request. A video of Jones allegedly instructing a girl to dance for him has also surfaced.

“I’d have conversations online with girls that would involve me asking them to create a video of themselves twerking,” Jones said. “Sometimes I’d make videos of myself doing some twerk moves in return. Here’s the truth: I NEVER asked them to do anything more than send a twerking video. Nothing EVER went beyond that.” Jones said in the video

In the latest videos and reports however, those apologies and explanations are moot and pointless. Let there be no illusion or misunderstanding that Jones might have thought they were older. Jones goes into disgusting details of just how he wants the videos to be made for and in these instructions, he explicitly asks the girls to mention their ages over and over. There were two victims in the charges that is he involved with, known as victim A and victim B. He told victim A: *warning: explicit content ahead

“Now you need an intro to the video. At the beginning, get super close and say these lines : hey Austin, it’s (name) and this butt is (age) years old and then make it clap for 30 seconds. Got it?”

Victim A: Ok so this is a real thing and you won’t post them anywhere?

Jones: “Right.  I delete them after I score them”

Jones:  Okay. Go make it clap super loud and talk about your age the whole time, got it?

He goes on further and manipulates the victim, saying

Jones: In your honest opinion, do you think your butt is good enough to give guys boners?

Victim A: Yes I have given guys boners with it many times

Jones: It hasn’t given me a boner yet. That’s why I’m concerned.

Victim A: Damn it

Jones: I guess try harder!! Add more lines while you bounce if you think that will help

Victim A reportedly sent 15 videos of herself to Jones where she exposed her anus in 10 of these videos.

Victim B faced the same amount of manipulation and degradation. Jones was fully aware of her age as well yet continued to pursue her despite that. He said to her:

Victim B:  Yea I’m a youngster

Jones: [Victim B’s first name], do you realize how lucky you are?!?!

Jones: I seriously shouldn’t be even talking to you

Victim B: You’re young too

A lot of the interaction between the two is just Jones courting her in a way, telling her how lucky she is that she even gets to talk to him and how she needs to prove how good of a fan she is. Also saying things like: “ think about how amazing that would be for you! To have your favorite singer spanking your ass!” and “If you’re lucky maybe I’d let you suck my dick”. Victim B replied saying “ (she) wanted to make you happy an all but I don’t want either of us getting into trouble over it,” to which he responds “ Ofcourse you can keep making videos! You’re doing a great job!” and “Nothing is going to happen” and then saying “I guess you really aren’t by biggest fan…ok then”. She then gives in saying “I’ll do as much as I can.

Jones then asks her specific requests saying “Bounce again and smile at the camera while you bounce. And while you bounce, say “I’m only 14” 3 times throughout the video.” Then he instructs the young girl
“Bend over halfway (doesn’t have to be all the way), put your left hand on your left butt cheek, and then your right hand on your right butt check, and then clap them together!! Repeatedly…got it?!”

Remember how he said in his apology video how he never did anything beyond making them twerk, well this time around he was more bold and said : “ Instead of clapping them, how about you just spread you cheeks for 10 seconds then. Would that be easier?”, “…Your wedgie has to be good enough so that when you spread your cheeks, it shows the edges of your butthole…OMG that would be so funny!”

She then shows reluctance and says that she is uncomfortable with the instructions, to which he says:
“I’m just trying to help you! I know you’re trying your hardest to prove you’re my biggest fan, And I don’t want to have to find someone else”,” If you really are my biggest fan, you would do it! You’re doing so good I need my biggest fan to be confident. It’ll be funny if you do it without them (the shorts) like as soon as you spread them, omg. We’ll both laugh”

Victim B ended up sending 25 videos to Jones, approximately 8 videos depict Victim B pulling her underwear down and using her hands to spread her buttocks and expose her anus and genitals”

Who knows that if this was these two were the only two incidents and victims?  Who knows that this is where the story ends? Now that this had been brought up, could there be more victims speaking up? Since of course he has a history of soliciting minors that he has admitted to and has been arrested for. Events like this are unfortunate reminders that monsters like this do exist in our society and target victims who are vulnerable. It is our responsibility as parents and guardians, or just people who know better, to look out for our children. Look at what they do online. Monitor who they follow online and who they look upto, what kind of person they are and if they have a history, such as Austin Jones did. It isn’t wrong to find a role model in a Youtube personality but you never know. What those girls went through should never have happened and Austin Jones should have had his channel terminated the first time he admitted to using underage girls.  They will have to live with these experiences for the rest of their lives and we as a community should prevent events like this from ever occurring, using all tools necessary.

Austin Jones currently has been released on a $100,000 bond and has been ordered by the judge to stay at his mother’s home without an internet connection. If convicted, he will still face jail time.