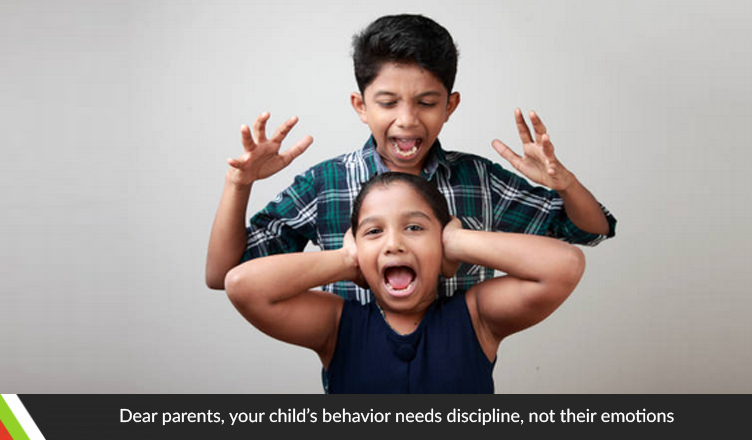 Majority of the Indian parents nowadays tend to follow the similar parenting styles they themselves were brought up with. But it doesn’t turn out to be successful all the time.  If you start your every lecture with “Jab ham chotay thay…” or “Hamare zamaney mein…,” a time will come your children will stop listening to you altogether. Why? Because they can’t relate. And let’s face it, it is not that jamana anymore.

The children today could surely learn a few things regarding values, morals, and life lessons from your past, but they can’t use those to solve their present-day enigmas.

Children are sensitive by nature. To parents, when they have lost their patience, they find it out of proportion and irrational as well. This is rather normal. Particularly in an Indian household, boys are called out for being emotional or sentimental (“larkay nahi rote”), which is completely wrong. On the other hand, where girls are expected to be emotional, they are taught to be patient and bear it all.

Both of these behaviors are wrong. Every child, regardless of his gender, deserves to feel things and express their emotions whichever way they want. Even if you don’t feel the same way or never felt like that as a child.

So, the parents need to understand that your child is a different individual than you and has his own different needs. Your child isn’t you!

You should correct your child for breaking the rules, being disrespectful, hurting anyone, or behaving inappropriately in social gatherings. But also, let them know that it is alright to feel sad, scared, angry, excited, or even afraid.

Curbing emotions and hiding how you feel never did any good to anyone.

Instead of trying to disciplining your children’s emotions, you should discipline your child’s behavior that would help them in becoming a responsible adult of the future:

The first thing to do is differentiate between how your child feels and what he does. Anger is a feeling, but hitting is a behavior. Similarly, sadness is a feeling but shouting and screaming is a behavior. Instead of convincing your child not to feel a certain way, teach him to deal with uncomfortable emotions. If they get angry quickly, help them with anger management techniques.

Let them know that it is alright to feel angry, but throwing stuff around and screaming is not healthy or acceptable behavior.

If you teach your children, especially your sons, that you shouldn’t feel sad, they would begin to believe that feelings are a no-go area. They would go to great lengths to avoid grief or sadness, which is not healthy.

Similarly, if you teach your children that feeling angry is wrong, your child would begin to fake it. They would keep a smile on their face and not speak up for themselves. Anger itself isn’t bad, but how you deal with your anger makes the difference. Don’t try to change your child’s emotions; do not say things such as, “Stop being dramatic,” “Don’t be a baby,” “Stop getting mad over silly things,” etc.

With the passage of time, as your child grows up, they would gain better control over their emotions. But it does not imply they won’t struggle in their teen or preteen years. Teenage in itself is an emotional roller coaster. Look for moments when you can coach your child and help them in managing their emotions better. Your children notice how you respond to difficult situations. So help them and yourselves by tackling issues smartly.

When you teach your children that it is alright to feel, that their emotions are alright, and there are ways to express them socially, you would see how it improves their behavior.

Here are some tips that could help you get a peek into her feelings:

•    Teach your child to name his feelings so that you can understand his emotions. For instance, your plan to go out with family got canceled, you could say something like, “It looks like you’re a feeling disappointed that our plan to go out was canceled, we will definitely do this again very soon, so don’t be sad.

•    If your child fights with his siblings and breaks toys, then you have to let them know that it’s not alright. Establish clear rules that you will not punish them for feelings but definitely for being mean to others and breaking the rules.

•    You have to proactively teach your child that they have to cope with discomfort positively. You could come up with options such as that he can play outside when he is angry or color a picture when they are sad.

•    It is important that once your child begins to understand emotions, don’t let them use it as an excuse. You have to hold them accountable for their behavior. Don’t allow them to get out of doing chores or homework when they are sad/angry.

•    You have to teach them to channel their feelings appropriately. Tell them how opting for some other thing like playing a game, dancing, or going for a walk in the park could make them feel better if they are feeling distressed or angry.

Indian parents are often of the view that if they are raising a mentally strong child, it means raising an unemotional child. This is far from the truth. Mentally strong kids not only recognize their feelings and emotions, but they also find healthy ways to cope with those feelings as well.

You have to show your child that uncomfortable emotions are a part of life and sometimes in your life, you may have to act opposite to how you feel. For example, teach them to be kind to others even if you are having a bad day. Tell them that even when you are not feeling happy, you have to go to work. Be clear that things have to be done even when you don’t feel like it.

Try to adopt these ways, and you would see that disciplining behavior is more important and fruitful rather than asking your children to suppress and control their emotions.