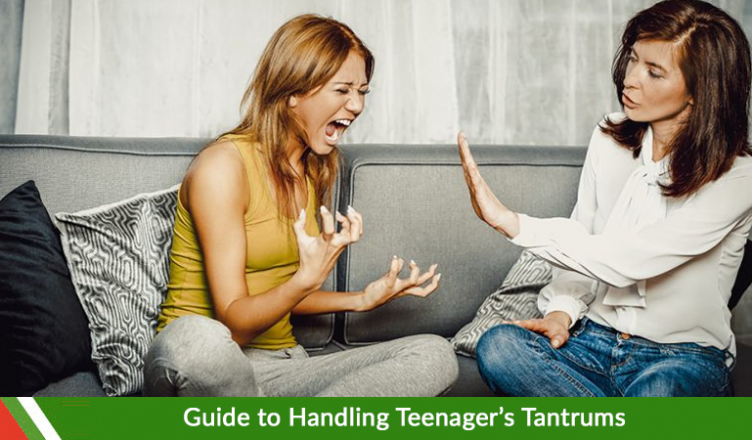 Dealing with teenage tantrums is a confusing, and sometimes scary experience, for the parents.  No one can deny how hard parenting is, but handling a teenager—it’s harder—with a multitude of unprecedented challenges not shared or addressed before in any of the parenting books. Teens are an ever-evolving specie and every one of its times has seen them evolving into something previously unheard of.

Let’s start off with their moods wings. One minute your teen is the sweetest person on the planet, and the next, you seem them stomping out of the room while slamming the door behind them. The mood swings are quite frequent, and unpredictable, to say the least.

The Biology behind Tantrums:

We link the mood swings and tantrums to raging hormones. There is a reason for doing that. The prefrontal cortex (PFC) happens to be the last region of the brain to fully mature. It goes through substantial changes from ages 4 to 18. The initial development of PFC while a child is in a growing age helps them staying calm and controlling their tantrums. The fresh neural connections play an important role in helping them with their actions and social behavior.

During puberty, when a child is 11 or 12 years of age, the PFC goes through some further changes that mess up with a teen’s social as well as emotional management skills. Then, there are the personality changes that come with teenage. In order to understand the reason behind the temper tantrums teenagers are known to throw, it is essential to both acknowledge and recognize the normal aspects of adolescence which are: entitlement and self-centeredness.

When just getting into the age, teenagers have a strong need to promote themselves. For them, the world revolves around them and their needs. This is where the entitlement comes from. They think that they are entitled to feel this way. Teenagers think that they are grown up enough to take all the decisions themselves without any parental interference or supervision. That doesn’t mean your teenager is rebellious. It is part of adolescence and every parent on earth has dealt with a tantrum-throwing teenager.

Role of Relationships in a Teenager’s Life:

According to research, the quality of peer relationships plays the role of the biggest stressors in teenage life. The way teenagers manage their mood swings greatly depends on the way their peer relationships are going on and how they respond to peer pressure. Teenagers are much easier to get along when their relationships and friendships are going well. Teenagers get stirred up when they don’t. And as a result, you see shouting matches, doors getting slammed and you, and becoming their biggest enemy (in their eyes of course).

Have you ever thought about these stressors when your teenager is throwing a tantrum? Whenever you see a tantrum brewing or flaunting itself in its angry glory, ask yourself what the fight really is about? Is it about the fact that your teenager doesn’t wish to do their chores, clean up their room or there is some other thing triggering that kind of behavior?

Here are some simple yet effective tips for you so that you can handle your teenager’s tantrums in a much better way:

You need to set ground rules in order to keep a strong relationship between you and your child and maintain a healthy rapport. These rules could be about the time they are expected to finish their homework, be back home, have dinner with family, help in household chores, their online activities, hanging out with friends, and monthly expenses, etc.

See that you are a bit flexible in some of the rules as well. Acknowledge and appreciate when your teen exhibits good behavior. Reward them on and off too to keep the behavior consistent.

Give the Right Reactions

The parent-child relationship happens to be a two-way street. Therefore, the way you choose to react or behave in certain situations deeply impact your teen’s behavior. As a parent, you have to teach them the right thing. But, before you react to something, try to place yourself in their shoes. They are growing up and, many of their own emotional and psychological needs are foreign to them. They are getting used to this whirlwind of physical and psychological changes.

Watch out your language while speaking to them as parents are a child’s first teachers. Raising your voice doesn’t always necessarily does the job. Having a firm yet polite conversation would keep you both calm, and your child can understand you better.

Try to be their friend; please do!

As a parent, you have tons of responsibilities. Most of the time, you have to be a typical parent. But sometimes, try to give yourself some relief as well. Try to be their friend. Remember that your child is just getting to know the world and developing their own personality. They are making their own perception about numerous things.

Try to create a friendly relationship with them where they trust you enough and are comfortable enough to confide in you. They are just getting used to in the adult world and need your help. Be there for them rather than being a parent all the time. They need to learn a few things on their own in their own personal space.

Teach them the right attitude:

When you teach your teenager the right attitude, half of the job is done. Encourage your child to have a positive attitude towards life. Urge them to look for solutions rather than fretting about the problem. This should begin at a very young age.

When they are in a good mood, have deep conversations with them. Teach them about directing their energy into productive and healthy activities such as sports, writing, painting, dancing or whatever that interests them. This way, your child would become a balanced and focused individual in the future.

If you are somewhat an overbearing parent, your parental attitude needs to change. Instead of forcing your children into performing better all the time, find means to motivate them. Do not pressurize them into doing things they don’t want to do or else they would resent you for their whole life.

At the same time, another thing to remember is that never compare them to anyone; not their siblings even. It would bring them no good. A major reason why teens are irritated most of the time is due to their parents’ high expectations from them which they just can’t match.

Hope these tips help you in bringing down the frequency of your teen’s tantrums.