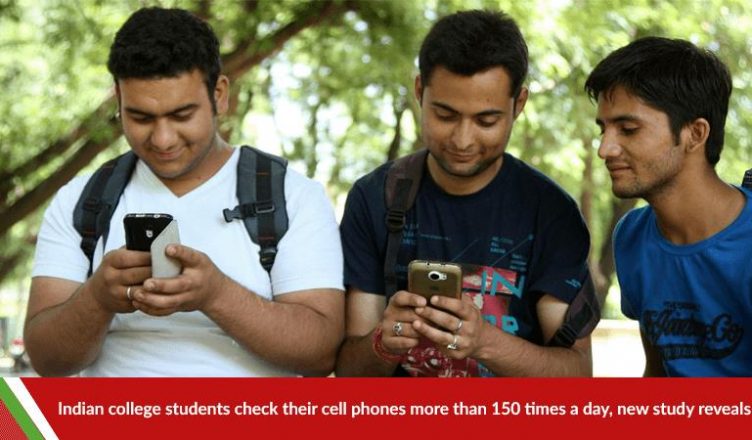 A recent study has discovered that college students in India check their mobile phones more than 150 times daily.

The research, called the Smartphone Dependency, Hedonism and Purchase Behavior: Implications for Digital India Initiatives was conducted by the Aligarh Muslim University and funded by the Indian Council of Social Science Research (ICSSR) New Delhi in 20 central universities. 200 students from each university were interviewed.

The Project Director Mohammed Naved Khan, Asst. Faculty Professor at the Faculty of Management Studies and Research at Aligarh Muslim University said, “Anxiety and fear of miss ing out on information make university students check their mobile devices as many as 150 times a day on an average, an activity which can have adverse effects on the students’ health as well as academics. Only 26% of the respondents said they use smartphones primarily to make calls. The remaining respondents use smartphones for other purposes such as accessing social networking sites, Google searches and for entertainment such as watching movies.”

According to Khan, the researchers found it shocking that about 23% of the students use their smartphones for more than eight hours a day. The study proposes to fill the existing research gap in the understanding of various facets of smartphone dependency in the University students in India.

As per numerous estimates, almost 80% of the country’s college and university students have mobile phones and most of them prefer to have a smartphone at their disposal because of the variety of features it offers, applications and convenience. For most, a smartphone is a rather affordable replacement for a computer.

The study aims to understand the different aspects of the smartphone dependency and addiction among the college going students in India. Khan further added that these figures are rather shocking and pose some serious threats to the health and academic performance in the long run. A number of researchers have recommended the daily smartphone use limit for two hours a day for teenagers.

Most of the research on the smartphone use and user data relies on anecdotal evidence. This study happens to be first of its kind in India that is being conducted to practically analyze how smartphones are used and the related user behaviors over a period of two years. As per the present literature on cell phone usage the number of Indian smartphone users is estimated to reach 690 million by 2020 which is perceived as the key enabler in the consumption of the internet.

In the past, surveys like the Digital Commerce Report 2015, around 54% of the internet user base of India would be above the age of 25 by 2018. And out of this, 70-80% are expected to access the internet using smartphones. Facebook/WhatsApp/Twitter are the preferred means of communication for over 70% of the smartphone users today.

A study conducted last year in 2017 found that using smartphones for long hours leads to a risk of anxiety, depression, and insomnia among the teenagers. The study was conducted in South Korea by the researchers of Korea University in South Korea in which an imbalance was found in the brain chemistry of youngsters who were addicted to using their smartphones and the internet.