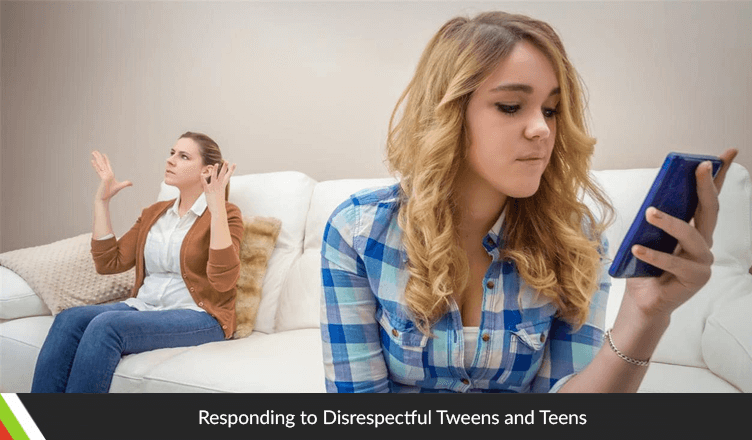 Disrespect is unacceptable. And especially when it comes from a child. If you are a parent to tweens and teens you surely would have faced such instances where your child tells you that they hate you among other rude things. Even though it is hurtful and heartbreaking for your little one to tell you that they never want to speak to you, hate you or wish you would just leave them alone when flashback a few years, they wouldn’t even let you go to the loo alone, it is all part of parenting. And every parent who has a teenager would tell you that they dealt with the same instance a few instances.

But, you cannot put all of it on hormones and the tantrum-throwing age adolescence is. It is possible that sometimes a child shows disrespect to you from an early age. No matter what, it is bound to push any parent, be it a dad or a mom’s emotional buttons.

The Nature of Disrespecting Behavior:

As parents, we expect our children to respect us. And that includes our feelings, our home, and the authority that we establish. Children are expected to show respect to everyone. They should have manners to speak to others regardless of their age. So, how can we create a balance that our child’s need for independence doesn’t clash with our expectation of respect from them?

The first thing to do in this case is determining the nature of disrespecting behavior. There are many reasons as to why your child is acting this way. First, they might not realize that their behavior is disrespectful. For example, questioning a parent’s decision might come off to some as rude, but for a  child, he is just getting his confusion cleared.

There are several reasons a child may behave in a way that is “disrespectful.” First, he may not realize the behavior is disrespectful. For example, questioning a parent’s decision may strike adults as rude, but to a child, it may simply be a way of getting his needs met: I want to go to my friend’s house. My mom said ‘No.’ I want to figure out if there’s any possible way I can change her mind because I really want to go. So I question, I argue, I do anything I can think of as a way of getting her to say ‘Yes.’

That child is acting at the moment, focusing on getting what he wants, not really paying attention to the fact that his behavior is actually backfiring and digging him a bigger hole. Kids also have difficulty asserting or expressing themselves appropriately when feeling angry or frustrated. Adrenaline kicks in and eyes start rolling, voices raise, feet get stomped and doors get slammed. Ever find yourself saying, “Stop it right now, before you make things even worse for yourself!”?

Some kids have difficulty managing the stress and emotions they experience when faced with a limit or being told “no,” and just can’t keep themselves from crossing the line. Add in adolescence and hormones and you’ve got the potential for emotions and irritability to escalate quickly.

Finally, in today’s world, kids see disrespect and “talking back” modeled for them in the media all the time. In fact, most media send the message that the kids are usually smarter than the parents!

Most parents face mild to moderate disrespectful behavior from their kids from time to time. But what’s an effective way to respond?

1. Decide Which Behaviors Need to Be Addressed

Most kids have engaged in mildly disrespectful behaviors, such as rolling their eyes at a parent, at least a few times in life. Sometimes it’s as they’re walking away; sometimes they do it before they realize, “Oops, mom’s still standing in front of me!” This is an example of a behavior that you may choose to “let go,” and instead focus on larger issues of disrespect (such as yelling, swearing, slamming doors, screaming “I hate you,” depending on your child’s age.) Who hasn’t heard Mom say, “If you keep making that face, it’ll freeze that way!” Sometimes it’s hard for a teen to hide their discontent – and honestly, isn’t it that way for all of us? On the other hand, if your daughter rolls her eyes at you every time you turn around, you may decide that enough is enough and this behavior warrants a conversation. As a parent, it’s a judgment call, but most parents agree there are times when you’ll want to “pick your battles.”

One of the reasons a rude child is so upsetting to us is that we often feel it’s a reflection of our parenting. If you’re sitting around the Thanksgiving table with Uncle Bob and Grandma Jean and your son blurt out something rude or inconsiderate to you, it can trigger feelings of anger and embarrassment. “What kind of parent will other people think I am if my child is acting this way?” As hard as it is, remember: your child’s behavior is a reflection of him – not you.

3. Define for Your Child What Disrespect Is

Talk to your child about which behavior is respectful and which isn’t. We often expect our kids to know things without spelling them out. Kids who are younger tend to think in terms that are “concrete.” You have to actually tell them “When you yell at me, it’s disrespectful.” Don’t assume that just because your child has reached adolescence, he has insight into how his behavior comes off to other people. Sometimes it’s even hard for us – as parents – to pin down. There are times it may be a tone of voice or just the way something was said that sounded like it had “attitude.” Again, decide if those are things that can be let go from time to time or if it’s frequent enough that it’s a pattern that needs to be addressed. Also, let your child know which behaviors will result in potential consequences: “The next time you yell at me, there will be no friends over for the weekend,” or whatever your consequence may be. Remember to keep consequences realistic and short term when the issue is only mild to moderate disrespect. You want the “punishment to fit the crime,” so to speak. And what you’re really doing is showing your child that when she treats others disrespectfully, she’s not likely to get many nice things done for her in return.

4. Give Your Child Alternative Problem-Solving Skills

If your child is handling her frustration or anger in a way that is disrespectful or unacceptable, talk with her about different ways she can express herself appropriately. You can actually role-play different situations with your child. Have her play the parent and you play her. Give her the words she can use to let you know she’s disappointed or unhappy. Because in life, she’s going to have to express being unhappy or frustrated – not just to you, but to others such as friends, teachers and eventually a boss or spouse. It can be valuable to ask yourself, “How am I teaching my child to treat others? Am I modeling for her how to treat others respectfully?” But ultimately, it’s your child’s responsibility to manage her own emotions and behavior by using the tools you provide her.

Recognize times your child does behave in a respectful way toward you or others and make sure he knows you’re aware of it: “You know, I really enjoyed talking to you this way today. I hope we can have more conversations like this.” Even if he was only respectful for a moment, notice and acknowledge it. You want to reinforce the behavior you want to see more often. Focusing only on the behavior you don’t want to see won’t accomplish your parenting goal: to teach your child to behave in a respectful manner toward you and others.

The tips in this article are intended to help parents deal with mild to moderate disrespect. Sometimes, particularly with children who are oppositional or defiant, disrespect can escalate into a pattern of verbal abuse or more serious rule-breaking. Yes, breaking things in your home or destroying property, staying out past curfew or not following the house rules is disrespectful. But those things are also part of a more serious pattern of conduct and behavioral issues. Even though a child’s disrespect can be a frustrating problem, often what we see as problems are also opportunities to teach our children about values and life skills.