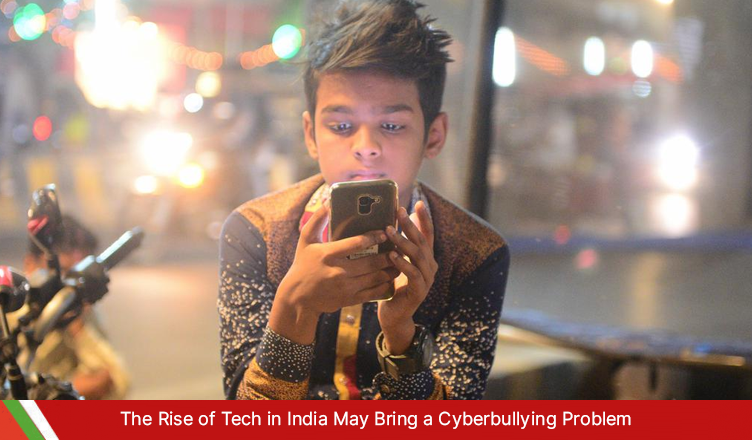 Children in India are vulnerable to cyberbullying as internet and smartphone technology continue to rise there. A poll of 174 middle school students in Delhi found that 8% engaged in cyberbullying, and 17% were victims of such behavior. Males were more prone than girls to bully and fight in person. They were also more likely to face both online and offline aggression. India doesn’t have any laws against cyberbullying but the topic is being closely studied for the past several years now. Therefore, these researches should be analyzed closely by parents and lawmakers to protect Indian youth.

Why Has Cyberbullying Become A Problem In India?

Smartphones are now quite common. Smartphone and social media use are widespread in most emerging countries, including India. Over half of the population currently possesses a smartphone. It is commonplace among the younger and better-educated demographics. According to a study, education disparity is most obvious in India, where better-educated people are 41 percentage points more likely to own a smartphone.

Another reason why smartphones and laptops became common was the pandemic. The entire educational dynamic shifted from a completely classroom-based to an online system. It meant that students spent significantly more time on their gadgets each day than before COVID-19. People used it to cope with losing out on social gatherings. It exposed them to online bullies and their chances of getting cyberbullied increased exponentially.

India now provides affordable 4G data bundles for their phones. Many Android smartphone manufacturers have designed low-cost devices for the Indian market. This contributes to the country’s ever-increasing smartphone usage. It makes browsing the Internet more accessible than before and thus the chances of getting cyberbullied increase even further.

Gaming is also very popular in India, with over 300 million individuals in the country playing mobile games. The industry has been quickly increasing over the last two years, and the COVID-19 outbreak has only benefited its cause. Players get bullied frequently when playing multiplayer games irrespective of their age. If a player is not performing at their best and making multiple mistakes in a match, they get ridiculed by their teammates and/or the enemy team.

All of these factors have led to increased cyberbullying incidents in India.

What Are The Harms Of Cyberbullying?

Cyberbullying is the intentional and repetitive infliction of harm through the use of electronic gadgets, video games, and online social media platforms. It frequently manifests as hate accounts, harmful social media posts, online rumors and gossip, and unpleasant remarks during gaming sessions. Almost often, the purpose is to shame, threaten, humiliate, intimidate, or mistreat the victim.

According to research, persons who are cyberbullied face a variety of effects, including emotional, physical, mental, and scholastic difficulties. Furthermore, cyberbullying is a huge stressor in the life of a young person. Cyberbullying causes young people to feel wounded, embarrassed, and, in some cases, afraid.

They not only frequently blame themselves for the anguish and harassment they endure, but they are also left feeling tremendously anxious. Indeed, one study discovered that 35% of cyberbullying victims experienced high levels of stress.

It is also common for victims of cyberbullying to feel lonely and desperate. Many targeted children report being bullied at school and in online classrooms. This, in turn, has an impact on their self-esteem and emotions of self-worth. Cyberbullying can eventually lead to self-harm and even suicide ideation.

Children who are cyberbullied may also develop physical symptoms as a result of the stress they are under. They may complain of stomachaches, headaches, skin problems, and other physical issues.

Eating and sleeping habits get affected as well. Kids who experience cyberbullying often have trouble falling asleep as they have nightmares often involving the bully tormenting them in their dreams. Kids will often have disturbed diets during moments of stress. They either start binge eating or barely eat when stressed or change their appearance to appease their bully.

Kids’ academic and extracurricular activities get impacted as well. They have trouble focusing on their assignments and lectures. They also start to isolate themselves from their friends and family. Their grades suffer and their social lives deteriorate as well. These are all common signs of cyberbullying that you should look out for.

How to Prevent Cyberbullying?

Although there is no guarantee that your kids will never get bullied, there are certain measures you can take to minimize the risk of bullying. You need to communicate with your kids and teach them what cyberbullying is and how it impacts a person. Discuss the risks associated with cyberbullying and what measures they can take to protect themselves.

It is also vital to train them to become better digital citizens by using social media, online gaming, and internet browsing safely and responsibly.

It is pertinent that your children use passwords for everything. It can prevent cyberbullying and similar incidents such as phishing. Passwords are one of the most efficient methods of safeguarding accounts and devices.

Make it clear to your child that they should never reveal their passwords to anyone, including close friends. Even if they trust that person totally, the reality is that friends come and go, and there is no assurance they will be friends indefinitely. In turn, that friend could try to take advantage of you by using your online accounts to harass others or post inappropriate content posing as your child.

Ensure your kids know the privacy settings of their phones, web browser, and social media sites. Examine the settings together and show them how they can secure themselves by turning on maximum privacy settings. It means only close friends and family members will be able to contact them on social media websites. And since third parties won’t be able to connect with them, it greatly reduces the risk of getting bullied online. Also, advise them to turn off all in-game chats, so your teammates or enemy team don’t flame you during a misplay.

2.     Keep an Eye on Their Online Activities

A cell phone tracking app can assist in reducing excessive phone use. Because a parent cannot control their child’s internet habits, they can use tracking apps to their benefit. Bullying and online abuse get widely disseminated via social media. Children do not have to worry about keeping their secrets hidden from their parents because they do not divulge them out of fear. When parents notice that things are getting out of hand, they will evaluate the severity of the situation and intervene.

If parents notice their children becoming more distant and reticent, they can intervene. It could also be an indication of depression. Parents can use Xnspy, a popular remote cell phone tracking app, to check their child’s social media accounts and instant messaging apps for signs of bullying. They can then take the appropriate steps to limit their children’s phone use and ultimately prevent them from becoming victims of cyberbullying. They can also communicate effectively with their children by employing a hands-on approach. Since there aren’t any laws against cyberbullying in India, parents cannot report these incidents to the authorities. Thus, they need a proactive approach that Xnspy can help them achieve. This method can help a child’s mental and social development by instilling good values in them.

It was not previously possible because parents could not continually monitor their children’s online behaviors and what they did or said on the Internet. It is now possible, thanks to cell phone tracking apps.

India is at the forefront of a technological revolution. It has a booming market that is eager to get its hands on the latest piece of technological advancement. Thus India’s growing fondness for tech is undeniable, and it will continue to grow in the coming years. By following these steps, you can safeguard your kids against the adverse effects of such a technological boom in the Indian subcontinent.