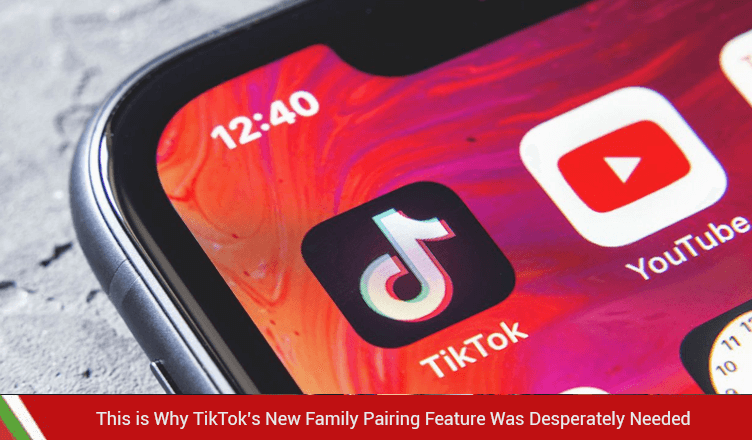 TikTok—the most famous video-sharing social media app—has recently launched a control feature called family pairing. And, we can’t be more grateful to the free social media video-sharing app for this latest development than ever before.

As we all know that TikTok has superseded the charts and rock the app stores with an unbelievable spike in downloading trends, TikTok has emerged as a Gen Z app. More than ever, teens and young adults are turning to the entertainment app. It lets you watch, create, and share originals, lip-syncing, and duets videos up to 15 seconds.

With its ever-growing popularity among the youngsters, it left various Facebook own holdings behind and became the world’s fourth-most downloaded non-gaming app of 2019.

We can say it is the app that separates the old from the young. Not only in terms of physical age but, mental and emotional too. Due to its short video format, the Gen Zers find so many opportunities to show their talent and become famous. The novel app allows its young users to express their thoughts and opinions and make a difference in a few seconds.

Owned by a Chinese internet technology company, ByteDance, the app introduced the idea of real and raw originality in contrast to the behavioral perfection imposed by Instagram and Twitter. Conversely, it exposed children to a whole lot of vulnerabilities too.

Often, TikTok users start their creative app journey by the age of 9 or so forth. Such a young age introduction to a wider array of app features and options makes it a critical time for teens and their families to learn about digital literacy and smart online behavior.

Several studies in countries, including the US, India, Pakistan, Indonesia, and others, reported the changing behaviors and other impacts of the free social media app on children, teens, and young adults.

TikTok, in the mid of April, introduced a family pairing feature into the app. In its latest statement, TikTok said that the embrace of platforms like TikTok is providing families with joint tools to express their creativity, share their stories, and show support for their communities. TikTok is advancing its commitment to the safety of users by introducing Family Pairing, which allows parents and teens to customize their safety settings based on individual needs. Family Pairing enhances the suite of safety tools.

How Family Pairing Will Help Parents?

Family Pairing will allow elders to link their TikTok account to the teen’s and set controls such as:

Once two accounts are linked, parents can control a kid’s settings from their phone. Previously, they’d have to set these restrictions within the app on their kid’s device. Still, parents have to get their kids agreed to link their accounts under the new system.

How to Set-up the Family Pairing Feature in TikTok

To set the new family pairing feature up, parents need to scan a QR code inside the digital wellbeing section of their kid’s account. Parents will receive a notification when the kids turn off the feature. Parents can re-link the account in case it was disconnected by any means.

The latest parental control addition is a big step forward where TikTok was a year ago. The free video-sharing app had to face certain restrictions across the borders in 2019 for various reasons. Last year, India banned the app for two months. Also, the app paid $5.7 million fine to the Federal Trade Commission as a consequence of violating the children’s privacy law in the US. Several countries like Pakistan, India, Bangladesh, and Saudi Arabia signaled to ban the app in their regions too.

Why Family Pairing Was Needed?

For many reasons, parental control in TikTok was necessary. With the apps’ mounting influence on young kids, parents were looking for more and more ways to monitor and track their kids’ online activities. The latest was indeed a much-anticipated addition. It will help parents and guardians to ensure kids’ well-being in the digital world as well.

Here are our top reasons that endorse the step taken by the TikTok to safeguard the digital spaces for kids and young adults:

India is Second-largest Market of TikTok

The two-week ban in April 2019 blessed the app with more popularity and users than ever before. Even though the legislators believed that the video-sharing social media app would expose children to pornographic content, sexual predators, and cyberbullying, TikTok managed to persuade the authorities that it had tightened regulations. TikTok, since then, duly found its way back onto the iOS App Store and Google Play Store.

With more emphasis on trending music videos, movie dialogues, and related content, TikTok cannot filter the swearing, sexual, or violent lyrics or gestures. Often, content with revealing clothing and allusive dancing also directs teens to inappropriate content. It has become the easiest and instant place for youngsters to peek into the age-restricted content.

On the other hand, it is also a great spot for kids to brew quick fame. Teens and young adults spend a lot of their time, money, and energy to make short and shocking videos to attract more and more eyes. Failing to achieve the likes, views, and comments results in depression and stress. According to a case reported in Noida, an 18-year-old TikTok user had committed suicide as he couldn’t get the likes on his videos and was severely depressed.

Business of Apps stats show that TikTok penetration is seemingly at its highest in Asia, where over a third of users aged 16-64 had an account.

With such a large number of young users, the craze of the app is self-expressing.

Here are some other statistical shreds of evidence:

When a user signs up for the TikTok account, it is public by default. It means anyone can see your videos, send you direct messages, and use your other information. Most kids do not know about the privacy settings, and when they know, they do not turn on those features as it would compromise their reach to the people and content.

It is one of the most popular features of TikTok. Trending videos attract kids. Creating duets is the fastest way to gain popularity. They make duet videos and share it all over social media. It takes them to places and people that they even cannot think of.

TikTok is addictive. Yes, you read it right. It’s addictive. Its short 15-seconds videos and one after another bombardment of different videos make it the most popular social media app for the new-gen youth.

Perhaps the TikTok’s latest parental control may not serve the purpose alone. Parents can also use third-party monitoring apps to better monitor their children’s smart gadgets. Kids are smart to dodge elders, but it is their responsibility to stay alert of their online activities, particularly on social media apps like TikTok.