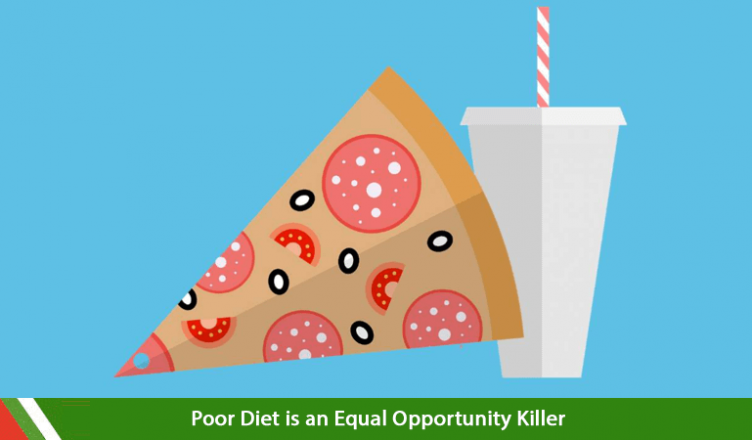 According to a new research study published in The Lancet revealed that one in five deaths globally could be prevented if people around the world cleaned up their eating habits. This makes the poor diet a bigger threat than other health risks like smoking. The research added that adding more healthy foods is the only key to a healthy lifestyle.

The research analyzed 20 years of dietary data from 195 countries and also considered epidemiological studies regarding health risks and benefits related to nutrition. The results revealed that around the world, more than 11 million people in 2017 died just because of poor diets. This study found that eating too much sodium was identified as the largest cause of diet-related deaths globally. Overall a low intake of healthy food, including whole grains, nuts, fruits, and vegetables has been identified as the major risk factor.

Dr. Ashkan Afshin, study co-author and an assistant professor at the University of Washington’s Institute for Health Metrics and Evaluation said: “Diet is an equal-opportunity killer. People — independent of age, gender, country of residence and socioeconomic status — to some extent are affected by poor dietary habits. Low intake of healthy foods and high intake of unhealthy foods is the leading cause of mortality, globally and in many countries.”

A balanced diet plan ensures a healthy lifestyle and reduces the threats of many health issues later in life. Children with bad eating habits are more likely to suffer from serious illnesses with lasting and devastating results. Also, poor eating habits picked up from parents during our early years can stay with us throughout our lives. 1 in 5 school-age children in America has obesity. In the United States, a significant number of kids have diets that fall short of the expert’s recommendations. Only 2 percent of kids meet USDA diet recommendations.

“We need to start healthy eating habits at a young age. Kids are going to eat what you’re eating. If you’re eating healthy foods, your kids will eat them, too,” said Veronica Figallo, a registered dietitian at Joe DiMaggio’s Children’s Hospital, part of Memorial Healthcare System.

Effects on a Child’s health

Weight gain and weight loss: Whether kids eat too much or too little, bad eating habits have serious consequences. Weight loss or weight gain is highly associated with other issues seen later in life like high blood pressure, osteoporosis, kidney disease, and heart disease.

Iron deficiency: It leads to anemia. Iron deficiency has a severe impact on the intellectual development of kids. It also limits their capacity for analysis and understanding.

Muscle weakness: Myasthenia is another consequence of a poor diet in kids. With muscle weakness, children are mostly lethargic, pale, and stop growing early. This also leads to low physical performance as well as poor academic performance in school.

Protein deficiency/excess: Protein is the most significant element for muscle growth. The lack of protein cause issues like exhaustion, muscle atrophy, fatigue, and weakness. On the other hand, excess protein overloads the kidneys and liver, which are responsible for toxins elimination from the body.

Carbohydrates: Kids who don’t get enough carbs feel tired and lethargic as carbs work like fuel or our body. At the other extreme, excessive intake can lead to diabetes and heart diseases. It also causes issues like mood swings and hyperactivity.

It is important to recognize here that kids aren’t born with a craving for Pizza or burger and an aversion to vegetables and fruits. This conditioning happens when kids are exposed to more and more unhealthy food options. Peer pressure, social media, fast food, and TV commercials also play a significant role in developing unhealthy food habits among kids. However, you can reprogram your kids’ food cravings so that they can crave healthier foods instead. Kids imitate their parents. So, if you want your kid to develop healthy eating habits, you have to work on your own diet plan first.

“At the end of the day, the parent is responsible for the types of foods brought into the home and what they pack in the lunchbox. Parents lead by example,” said Lucette Talamas, a dietitian with Baptist Health South Florida.

Although getting children to eat nutrient-rich foods from different groups can be a struggle, it is essential for their future development and growth.