Skip to content
XNSPY Official Blog > Tech > Print Books or eBooks: Which are better for your child? 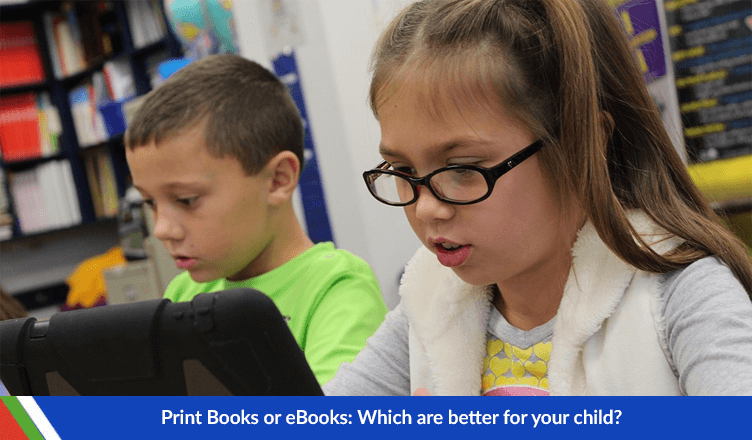 Reading can be one of the best experiences and pleasures in a young child’s life. Researchers from the University of Michigan conducted a study which was published in the journal Pediatrics. In the study, 37 parents were asked to read similar stories to their 2-3 year-olds in three different formats. These three formats were: a print book, a basic electronic book (without any bells or whistles) on tablet and, an enhanced electronic book (complete with animation and sound effects). The order of the formats was varied from one family to another.

All of the interactions were caught on video and coded while observing the number and kind of verbalization both by kids and parents, the general emotional tenor of the whole process and the amount of collaborative reading that took place between the parent and child. Reading print books together led to more verbalization about the story from both toddlers and parents, along with more back and forth dialogic collaboration.

Reach Out and Read, in a partnership with Scholastic, released the 7th edition of its Kids & Family Reading Report. It is a national survey of school-age children and their parents. 58% of kids from the survey love reading or like reading books for fun. It was also found that there has been a decrease in the reading frequency among the surveyed children since 2010.

The senior vice president at Scholastic and a contributor to the report, Lauren Tarshis directed her focus on the third grade. According to her, third grade is a crucial year when children are expected to achieve full fluency in reading. The fun part goes out of reading as they reach the age when they are expected to have mastered reading completely. The report called it a decline by 9. The number of kids who read books all week long for fun dropped to 35% of 9 –year-olds from 57% of 8-year-olds.

In a review that took place in 2014 on electronic storybooks, the researchers were able to outline some of the behaviors that such stories could lead to. Some stories proved to be helpful to young children and some of the ways they could hurt. Researchers particularly pointed out language delays among children and how certain features of electronic books reinforce a link between word and, an image such as animated pictures. Animated pictures can help a child in integrating information but, at the same time, causes a distraction as well. Games and other distracting features could cause a cognitive overload that can hinder a child’s learning process. Also, screen-time displaces the parent-child time.

Earlier research suggested that young children find enhancements problematic, but the results of this study reveal that it is less likely that a non-enhanced story on a tablet screen would stimulate parent-child dialogue. The researchers have been unable to conclude the reason behind it. It is quite possible that it has to do with our digital device using etiquette. Everyone has their own pattern of using their devices and perhaps, as the tablet is used more as a personal device, it is quite possible that parents and children use their devices independently at home.

Print books are the best when you are reading with your young ones. JAMA Pediatrics published a study in which the researchers observed the interaction between children and their parents between the ages of 10 to 16 months. The study revealed that when the children were playing with electronic toys, both the children and parents used fewer words compared to playing with traditional toys. Picture books or print books evoked even more language and words out of children compared to traditional toys.

Written word and images have a lot of impact on the reader’s brain. Especially a child’s. They help in developing a child’s brain and boost their imagination. Words are powerful and are capable of taking you into someone else’s life story, their adventure, they can stir all kinds of emotions in you. But it is up to the brain to take those words and run with them. According to brain imaging, hearing stories leads to visual images in the child’s brain and, this happens more strongly if the children have the habit of listening to stories.

The reason print books are so great because it offers a lot to the readers, both children and adults alike. Print books elicit a response from a child. For example, a small child cannot tap on a lion and hear a roar. He would need his parent’s assistance. And when you cannot make a horse gallop if you tap on it, in your brain, you could make it gallop as fast as you want with your words. Children can create a whole world in their minds, and their active imagination with the help of stories whereas, electronic books do not allow much room for imagination as children see everything right in front of them. Tablets and other smart devices have made it harder for both the parents and kids to engage in the rich experience print book reading provides.

The researchers also unveiled some struggles regarding the control of the tablet along with negative comments like don’t touch that button, etc. On the other hand, a print book is great at stimulating positive and engaging interactions between the parent and the child. Reading improves language skills, helps with vocabulary and most importantly, allows the child to create a whole world with written words.

This report also sheds light on the importance of reading role models meaning that the children who are avid readers also have certain people in their lives who enjoy reading as well as parents who read frequently. Parents play an important role. The book that motivates dialogue between the parent and the toddler also acts as the first step into the glorious world of stories and written language. Parents, who take pleasure in reading to their children, play a significant role in molding the child’s attitude. This proves to be a time for bonding between the parent and child that seems to have a lasting impact on a child’s life.

Dr. Tiffany Munzer, who works in the developmental-behavioral pediatrics at the University of Michigan C.S. Mott Children’s Hospital was the first author on the study. According to Munzer, the researchers particularly wanted to study toddlers due to a growing concern that electronic enhancements are distracting for toddlers. And this was the reason the enhanced books were compared to print books and non-enhanced electronic books.

Younger children get distracted with e-books and, there is plenty of technology actively directed towards parents. A child’s development does not require lots of sounds and bells. Engaging the child and talking to them is the best way to support early age development.

According to Dr. Munzer, the goal is to help families in engaging in such activities that spark a connection between the parent and child.

Assistant professor in THE department of pediatrics at NYU School of Medicine, Dr. Suzy Tomopoulous says that no matter what medium parents use, parents need to read to their child or even better, read together with their child and use what they are reading while expanding on the text.