Skip to content
XNSPY Official Blog > How to - New > Remember the Celebrity Leaks? Here’s How to Ensure it Never Happens Again 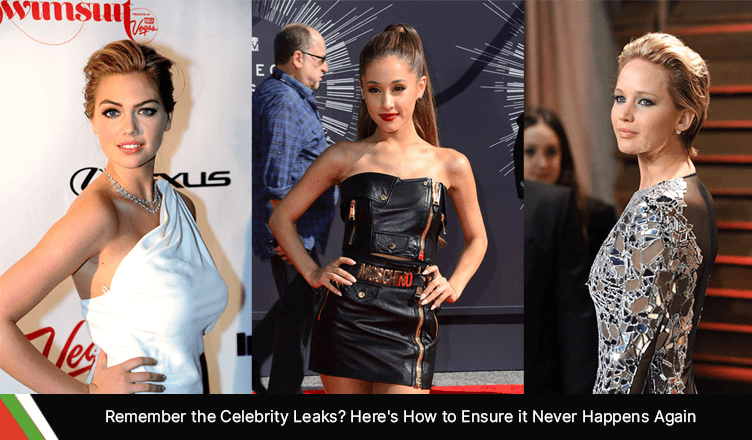 Due to their ever-present threat and the fact that almost 26000 cyberattacks occur every day, businesses have had to evolve. Corporations have set up stricter defenses, and vital IT infrastructure consistently requires safeguarding. But while this leverage is available to companies in general, regular consumers have to fend for themselves most times. The other option is for consumers to rely on the companies that deploy cybersecurity measures when using their services or products.

Most of the time, the latter strategy is employed. Technology consumers (like you and me) aren’t concerned with any additional security concerns, especially when purchasing a new smartphone or laptop. We entrust that the security aspect of the device is entrusted to the manufacturer or the operating system provider. But while this works fine most times, 2014 was a year that reminded all of us that our data isn’t safe, even with a trillion-dollar company like Apple manning the gates.

At the end of August 2014, 500 private pictures and videos of multiple female celebrities made their way on 4chan boards. These pictures primarily contained nudity and exposed a lot of A-listers in ways no one would have ever predicted. Marilyn Monroe’s famous image standing on top of a subway grate in New York was the most controversial A-list celebrity picture until that point. Her wrestling with the dress, as it afforded paparazzi to photograph her with an upskirt, was the most candid moment tabloids had reported on until 2014. And after more than a decade, the celebrity leak was a multitude of times worse.

As expected, the ensuing fallout and backlash from the Hollywood community were herculean. A flurry of legal proceedings and press releases followed, and for a brief moment, the glitter in Beverley Hills had alighted a fission reaction. One that spun to Silicon Valley and beyond.

Initial reports of the massive hack suggested that the pictures and videos in circulation were collected via Apple’s iCloud services. Experts at the time showed a security flaw in the company’s cloud service (the iCloud API allowed users to make unlimited attempts at the victim’s passwords), the actual reason was soon clarified. Spear-phishing attacks were the primary suspects. Two more batches of leaked content followed the first, and the conversation around personal data security started to gain traction.

What It Meant for Technology Companies

Technology companies, and particularly Apple, were at the center stage when discussions of user data were trending in the media. The vast insecurity the 2014 Celebrity Leaks had caused still ripple to this day, and the initial seeds of distrust were sown in the general public.

The primary reaction for technology firms globally was to ensure tighter security protocols and demand higher levels of personal security from their customers. Two-factor authentication was pushed strongly by Google on its services, and Apple and the rest followed suit. Today, it isn’t uncommon to find any application or digital service that does not include additional security layers for their consumers in the products. Tim Cook, CEO of Apple, promised to add additional security alerts for the iCloud service to ensure similar attacks do not occur in the future.

But as the leaks were supposedly through spear-phishing attacks, most companies have yet to install measures to deal with personalized threats to the public. Email spam filters have become very vigilant, but it is far from perfect. Couple that with the fact that there are still apps to monitor photos on Android devices available on the internet, and the chances of similar cyberattacks still loom large.

Companies that take on the ISO 27001 certification and other similar cybersecurity training have instilled a sense of personal responsibility. It is especially true when it comes to online activities in their employees. As more people enter the workforce and the IT industry swells up, cybersecurity tactics would be more widespread than ever. But while this is true for the average working professional, most people affected by data leaks and cyberattacks aren’t in the IT industry.

The age of social media influencers and celebrities has led to a rise in the number of people who use the internet for profit. It means a lot of their information is online too, and most (if not all) of their income is generated on various platforms as well. The same is true for people in other professional fields and students with an online presence.

Monitoring applications can be one reliable method to ensure safety in the workplace and the home. Xnspy, for instance, is one of the leading names in the industry. Leveraging its services for mass deployment in the home can be an effective solution against personal data theft.

Xnspy, and other brands like it, work in similar ways. They are apps for the Android platform that are side-loaded onto a phone or a tablet. These apps have a central control panel that manages all the information going in and out of the device. It is a clever way to combat cyberattacks: as any phishing emails and scam requests can be highlighted by anyone and be filtered out. Similarly, having access to multiple accounts in one location can ensure that your information is backed up to a secure server and is ready to download at a moment’s notice.

Xnspy is also a favored tool in the workplace, where its deployment is perhaps the largest. Business owners and employers routinely install Xnspy on company devices and phones to monitor any unwarranted emails targeting the company servers. The app can also pinpoint bad actors within an organization that could be responsible, or are planning, a cyberattack at any point.

In the home, Xnspy has a similar function. It can work as an app to monitor photos on Android devices by parents and guardians. Not only does it provide peace of mind by centralizing all the information under one banner, but has additional benefits such as monitoring social media streams, instant messenger chats, SMS, and calls for added security.

Social media influencers can also derive utility from Xnspy by using its syncing methods for iOS devices to ensure their iCloud is secure. As the app uses iCloud credentials to view backups on Apple products, individuals can guarantee their credentials are safe and not vulnerable to leaking by external parties. Additionally, you can check this method out to spy on someone’s videos remotely and ensure they have the correct security measures in place too.

This video demonstrates how easy it is to setup Xnspy for multimedia access:

The 2014 Celebrity Leaks could have been avoided by many had they implemented an additional security layer on their accounts. Today, most services, including social media platforms, ensure users enable some form of two-factor login or security protocol to sign in to their accounts. But still, this is not a practice followed by the majority. Having a two-factor login setup either via SMS or an authentication application is recommended.

The internet is awash with careless use of passwords and weak strings. Always ensure that your passwords have capital letters, numbers, symbols, and are longer than 8–10 characters minimum. Most people also reuse passwords across multiple sites and apps, and this can also lead to vulnerabilities. If one account is compromised, the others are too. Use unique passwords and a password manager to keep track of them.

Antivirus and anti-malware programs are essential on modern-day work machines. But don’t think that phones and tablets don’t require these either. It isn’t common for people to be running software that is a few cycles outdated, and these can have clear security flaws that can be exploited. Antivirus programs can help you defend against any issues that might surface when you’re online, and anti-malware software should be used to deal with any threats that have made their way onto your devices.

There will be an influx in the number of cyberattacks and cybersecurity risks as we build a more connected and increasingly digital world. Not just in terms of magnitude but severity as well. While technology companies and Silicon Valley giants ensure a secure platform for consumers to use, loopholes and vulnerabilities can still exist. Hackers, scammers, ransomware attackers, and other malicious bad actors are vigilantly looking for these loopholes to exploit.

Ultimately, the 2014 Celebrity Leaks were one of the biggest examples of cybersecurity taken lightly, and we hope nothing of that nature occurs again but measures need to be implemented to ensure it. Personal security is a priority in the digital world and will continue to encapsulate much of the online community.