Skip to content
XNSPY Official Blog > Everything Else - New > Smartphones in Classroom – What’s Their Real Impact on Students’ Performance? 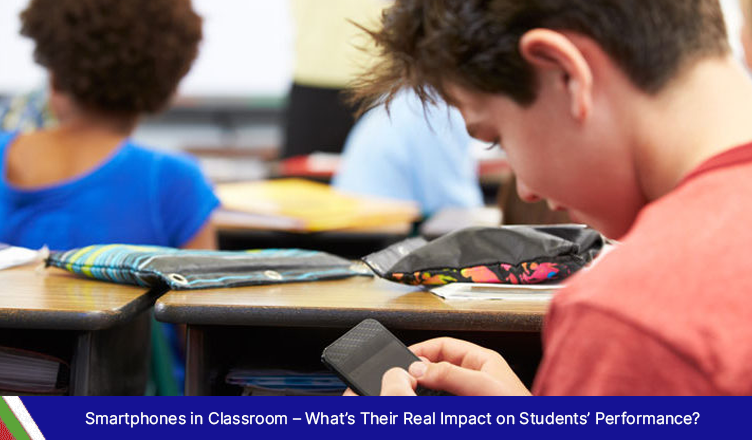 Most classrooms in the U.S. are not “no-phone zones.” I do not know of a school in my whereabouts that has any such policy of no cell phones during lectures. Even though teachers would tell kids not to use their phones during class, there are no official penalties for doing so. End result: kids use cell phones in classrooms all the time.

It’s majorly presumed cell phone doesn’t have a good impact on the kids but no one knows for sure yet.

As a parent, this concerns me a lot. Especially that my son is not performing well since I got him an iPhone. I had to give up on his demand. It was one complete year of daily whining, disagreements, and tantrums. I had to promise that he would get his iPhone 6S on his 12th birthday, so I had to do it when it was the day. But I am not happy with my decision. However, I am still not sure that it was his phone or just the gradual downgraded performance.

Many factors could have been responsible for his under-performance. Bad friends, or bad teachers or it could just be him not being able to cope with the tougher studies. However, my closet bet was that it was his smartphone.

Well, there’s no particular data that supports the idea that smartphones can undermine learning of all students. On the contrary, a Stanford University’s study concluded that providing one-to-one access to devices to ‘at-risk students’ could mean better learning. However, it was never made clear if smartphones were the choice of devices leading to students’ academic success and greater engagement.

Clinical psychologist, Richard Freed believes that high levels of smartphone users have detrimental effects on children’s achievement because kids end up using smartphones for entertainment purposes more often than they do it for learning.

But the most important findings are that of a study by Richard Murphy and Louis-Philippe Beland for the London School of Economics. They found out that mobile phone bans could have varying effects on the type of students. For under-achieving students, smartphone ban improves their scores and learning but there was no impact of the ban on high achievers.

With all these skewed outcomes, it was hard for me to come to a conclusion. So I decided to give smartphone ban a try at home (for certain hours) and also during school hours. To ensure that my son wasn’t using his phone during school, I used Xnspy to remotely lock/unlock his phone. He was free to use his phone during the break and at home outside his study or sleep hours.

My son’s grades improved just after a few months of managing his screen time. His mid-terms scores were significantly higher. However, there are a few things I would like to mention:

My son accepted the fact that he had been using his phone too often and can’t stop doing it.

When he had nothing else to do, he had no choice but to open his books and study.

He accepted that his concentration levels have improved since the ban and that he’s thankful about it.

I believe that it’s important for you to understand the underlying factor for your child’s under-performance. Maybe it’s not screen-time that your child is obsessed over. Maybe it’s something else. Figure that out before putting restrictions on your children.