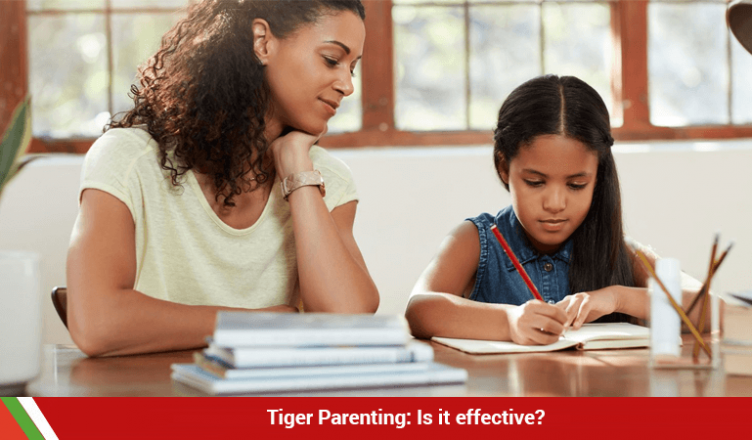 The world heard the term “tiger parenting” for the first time in 2011 when Amy Chua coined the term in her book, the Battle Hymn of the Tiger Mother. Tiger parenting uses harsh tactics to parent children but also focuses on familial closeness. Amy Chua is a Yale law professor, and in her book, she has written about her parenting style, which is a part of her Chinese heritage. She describes how her heritage has influenced her parenting methods. She talks about how she does not allow her daughters to watch TV, play computer games, and have play-dates, and sleepovers so they can achieve A-grades.

And she puts this strict parenting style down to the reason her two daughters achieved these grades in school and music and ended up attending Harvard University.

Tiger parenting is traditionally used in Asian and Chinese families and is quite prevalent there. Depending on different cultural factors of different Asian societies, tiger parenting has varying outcomes. This parenting method aims that children perform well at school and get the best grades. They push their kids to be successful in academics and also ascertain that they are academically focused and take their studies seriously. Parents have strict rules alongside support and warmth for their children.

Chua says in her book that while western parents try to respect their child’s individuality and urge them to pursue their true passions and support their life-choices in a nurturing environment, the Chinese people believe that the best way to keep your children safe is by preparing them for the future and letting them see what they are capable of by unleashing their true potential. Chinese parents arm their children with work habits, skills, and inner confidence that no one can take away from them.

Tiger Parenting and Children Behavior: What do the experts say?

According to a study that was published in the Journal of Personality, parents who adopt the strict and perfectionist parenting style might lead to their children to suffer from anxiety, high levels of depression, and become excessively self-critical.

Parents who pressure their children to such an extent end up undermining their self-confidence and belief. This could escalate in the coming years and impact their personality negatively. The notion that nothing is good enough, and everything has to be pin perfect can affect their overall happiness and well-being.

Kim Parker, author of East Meets West: Parenting from the Best of Both Worlds says that the term has its pros and cons. And mostly, Asian Americans use this term to describe their mothers and fathers who had migrated and were motivated by love and highly involved. They use coercive tactics, which is not a lot of positive parenting to bring up their children according to their definition of success.

Hazel Rose Markus is a Ph.D. and a professor of psychology at Stanford University. She also co-authored the study “My Mother and Me: Why Tiger Mothers Motivate Asian Americans  But Not European Americans.” She says that tiger parenting is based on the Asian values of independence and focuses on creating a committed relationship between a parent and a child.

Usually, parents in the Asian and Asian-American households direct their children to recognize their fundamental link with others that particularly involves parents and their obligation to them. And one of the most important obligations is to get an education so you can support the family and provide for them along with contributing to society. Being a good child means living up to parental expectations.

Tiger parenting style seems strict and quite vigorous to Westerners. According to Jenny Grant Rankin, educator, and author of Sharing Your Education Expertise with the World, a tiger parent sets very high goals for the child, which are usually academic. The parent drives the child relentlessly to achieve these goals. The moment one goal is met, another one is set immediately. The child doesn’t get any break from the parent’s demands.

Tiger parenting focuses on family obligation and emphasizes on reaching high standards. Dr. Markus says that though it might come off as too authoritarian, it is not the case always. Children get a lot of support from their parents in this parenting method. Parents sit with their child, help them with their homework, and ensure that their child understands the problems. Children are told that they even if they have trouble understanding the problem at first, with practice, they will eventually get the hang of it. They teach their children that they have the ability and make them understand that they are strong.

The co-author of the study Does Tiger Parenting Exist, Su Yeong Kim, Ph.D. and also a professor of human development and family sciences at the University of Texas at Austin, studied this parenting style in details and found that tiger parenting was high in one factor which was not present in other parenting styles. And that is shaming.

Compared to easygoing parents, supportive parents showed higher levels of shaming. This suggests that a moderate level of shaming could be an essential part of being a successful and supportive parent among Chinese Americans. Although tiger parents rank high in shaming, at the same time, they rank high in warmth as well. Normally, authoritarian parenting possesses a negative connotation where parents use ‘my way or the highway’ approach and tend to see children but not hear them. Tiger parenting uses some of the traits from authoritarian parenting, but it also has room for the parental sacrifice that is rooted in the selfless love and affection for the child.

According to Dr. Markus, some children might not respond too well to tiger parenting. Though studies reveal that Asian and Asian American student respond well to tiger parenting, not American students/children do. A study took place where Asian Americans students were asked to think of their mothers while following a failure to solve a problem. These students depicted higher levels of motivation when they thought about themselves. On the contrary, American kids who have families with European backgrounds showed lower motivation levels when they thought about their mothers.

Dr. Kim suggests that students with tiger parents represent an inconsistent pattern of distress and high achievement. Few kids respond just the opposite of what was intended. Whenever a child loses control, it affects their motivation dramatically.  As a result, their academic results are also impacted, says the author of Raising Happiness, Christine Carter.  If you try to motivate your children externally while using bribes, threats, or any other controlling parenting style, it would weaken their self-motivation.

These children feel anxiety, coupled with various other elements of a high-stress environment. This kind of pressure is not easy to manage, and children could end up becoming rebellious later in life. They will give up healthy goals of their lives at an age where they can enjoy independence.

In some families, the close bond of tiger parenting could alleviate some of the estranging factors. Studies reveal that parental sacrifice and low that is given in a warm relationship with the child can exceed any childhood shame or resentment.