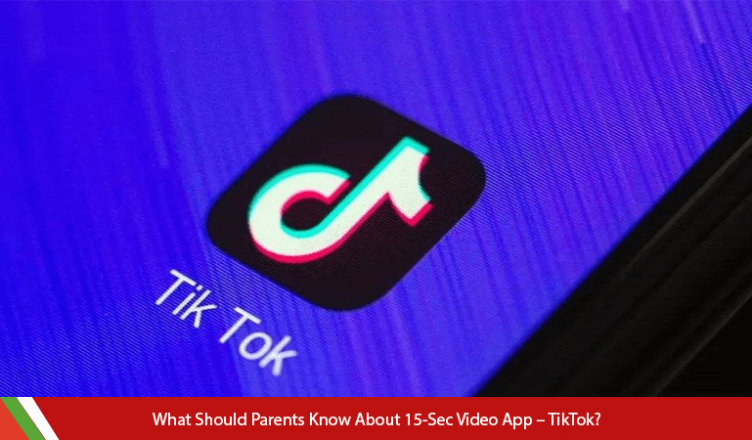 Fifteen-second videos and an unlimited stream of music; this is what the TikTok offers its users. You may have heard of it and may have even downloaded it. Despite the increasing popularity, this app comes with some serious security risks for children. Here are some necessary facts you need to know about TikTok.

TikTok is a Chinese video app that enables users to create short videos with special effects, and users can also share these video clips. In 2018, it had hit a major breakthrough, with one billion downloads across Android and iOS. With an estimated 45.8 million downloads in the first quarter of 2018, TikTok has been rising meteorically. In the most downloaded non-game app list for 2018, TikTok was ranked fourth following WhatsApp, Facebook Messenger, and Facebook.

Initially, TikTok started its life as two separate applications, called TikTok and Musical.ly. In 2017, Bytedance, Chinese Tech Company, bought the lip-syncing app Musical.ly for $1billion. In August 2018, the company announced about the scrubbing of Musial.ly name and merging it with its own app TikTok. Since then it has emerged as the most popular short-form video app among the youngsters.

For Gen-Z, the most popular features of this app are jokes, clips, and footage, along with memes and videos that allow users to lip-sync and dance to popular music. Its video-only interface makes it easier and less elaborative as compared to the other platforms such as Facebook or Twitter. TikTok is most widely used by children under 16. Almost 40% of the app’s users are aged between 16 and 24 years. They mostly use it when bored.

One of the TikTok users, Cel Malonzo reviewed on Google play, “This is why i put a 5 star i liked this app so much because you can have fun you can duet your friends and sometimes there are funny videos and if its a lucky day for you then you can download this app 😁 you should really try it😃 its so much fun.”

Powered by artificial intelligence, it allows vertical video streaming. Once you have downloaded the app, you receive short video clips in your feed even before signing up. Videos of people dancing, singing, and lip-syncing are sampled automatically in your feed. Unlike other social media platforms, the stream on TikTok is generated by an artificial intelligence algorithm that jumps on trending topics and your preferences. By using its unique feature of Duet, you can invite users to interact with already produced content. Most of the social media influencers that are active on this app are of the same age. 16-years old German twin sisters: Lisa and Lena are the TikTok superstars with a following of 31.5 million followers.

What are the safety concerns?

However, a series of security and data issues have caused a slight delay in the trending fame of TikTok. In July 2018, TikTok was banned in Indonesia for containing “pornography, inappropriate content, and blasphemy.” Though, the ban was lifted after a week when the company agreed to clear the negative content and also hired a local moderator for the country.

But TikTok seems to apply international standards more lightly than others. In February, the US Federal Trade Commission fined the ByteDance $5.7 million for breaching child privacy laws. According to reports, without parental consent, as required by the Children’s Online Privacy Protection Act, TikTok was collecting names, email addresses, and other data from children younger than 13 years. The company asks users for their email address, phone number, username, first and last name, a short bio, and a profile picture. In the United States, 65 million TikTok accounts have been registered, and the company knew that many of its users were under 13.

Joe Simons, FTC chairman said: “The operators of Musical.ly – now known as TikTok – knew many children were using the app, but they still failed to seek parental consent before collecting names, email addresses, and other personal information from users under the age of 13.” He added, “This record penalty should be a reminder to all online services and websites that target children: We take enforcement of COPPA very seriously, and we will not tolerate companies that flagrantly ignore the law.”

“It’s our priority to create a safe and welcoming experience for all of our users, and as we developed the global TikTok platform, we’ve been committed to creating measures to further protect our user community – including tools for parents to protect their teens and for users to enable additional privacy settings,” TikTok said in a statement, and agreed to pay a fine.

An investigation by BBC Trending reported TikTok about hundreds of sexual comments posted on videos uploaded by teenagers, and the company deleted the majority of the comments within 24 hours. However, the users who posted those comments were able to remain on the platform. According to TikTok’s community guideline, it forbids users from using “public posts or private messages to harass underage users,” and the company says “aware of content that sexually exploits, targets, or endangers children” it may “alert law enforcement or report cases.” Still, TikTok was unable to remove online predators who were approaching teenage girls online by sharing explicit messages on their posted videos.

Recently, TikTok is facing ban demands in India, too. The reason behind this ban is identified as “encouraging pornography.” TikTok, claiming 500 million users worldwide, has more than 120 million users in India. On the Indian Government’s orders, Google had compiled by deleting the app for Indian users; however, the app was still available on Apple’s platform. But the users who have already downloaded it can still use this app.

What should parents know?

When a user signs up on TikTok, the user profile is made “public” by default. This implies that anyone on the platform can view videos that your kids upload. They can send direct messages to them. They can contact your kids and can get as much information as they can. The American SPCC (American Society for the Positive Care of children) has devised a series of guidelines to keep children safe online, promoting the acronym TEAM:

Explore the online world together

Agree to rules about what’s OK and what’s not

Manage your family’s settings and controls

In the digital age, every kid can approach a smartphone. But, as a parent, you are responsible for tracking their digital footprints. Make sure you follow these basic rules to ensure the digital safety of your kids. All you need to do: Monitor the list of installed apps in your kid’s phone, review all the apps thoroughly, and block the inappropriate app remotely, if you find any.