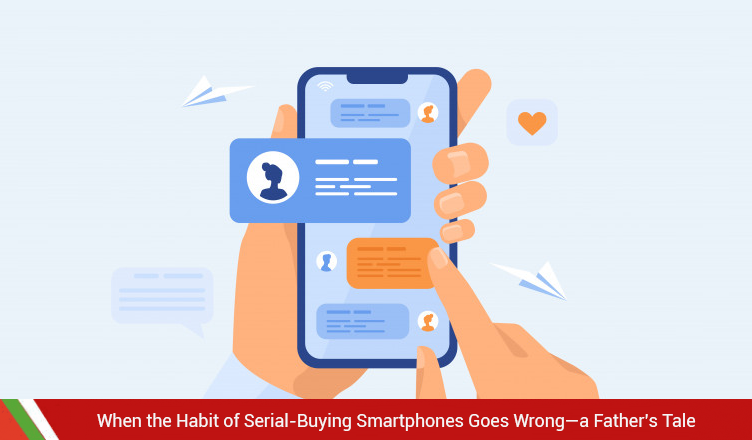 Another one of our readers shares the story of his young son that always wants to buy the latest iPhone. His relentless buying got him in a lot of trouble. Here’s the dad’s story in his own words…

Smartphones are pretty disposable. They’re designed to fit the consumerist culture where they’re only good for about a year, then a new model comes along leaving the old one obsolete. And my 15-year-old son is every bit a slave to this cycle the tech companies have conjured. He started with buying an iPhone 4, and then he wanted an iPhone 4s, after which he wanted an iPhone 5. And when he went crazy about wanting an iPhone 5s, I had to put my foot down. He’s a serial-buyer and I just knew in my bones this habit will prove to be harmful later on.

It seems like natural progression, doesn’t it? Of course a child would want an iPhone 5 after an iPhone 4. But I’ll be honest, I earn a monthly wage, and I can’t really tend to his serial buying habits anymore. So apparently, my son decided if I’m not buying it for him, he’ll just find another way. And he got himself into so much trouble after that.

Without my knowledge, my son went online to sell his iPhone 5. He found a buyer who lived nearby and drove 2 hours to meet him. He drove two hours to meet with a complete stranger! There are so many things that are wrong here, but let me list down the few dangers that concerned me most.

He did all of this while I was at work.

The person he met with was in his 20s, so he realized he could easily fool a 15-year-old. The person paid my son a lot lower than what they had originally agreed on, and hitched a ride with my son to a neighborhood I don’t trust at all.

You’d think this would be it, but I should be so lucky. Once he had sold enough things to get money for a new smartphone, my son found someone online who was selling his ‘mint-condition’ iPhone 5s. Once more, he drove all the way himself to go meet the seller. And here’s what happened.

The seller, who must have been no older than 25, demanded that he be given the money first. When my son argued that he wants to see the smartphone first, the seller produced a gun, held it to my son’s head and took all his money without giving him the phone. And then he just ran for it, leaving my son alone and afraid.

I can’t begin to explain to you the horror I felt when my son finally confessed what he’s been up to. That’s when I decided I needed a better way to curb his serial-buying disease. I installed a parental control app on his phone. This way, I could track wherever he was, and I could keep an eye on his browsing habits. I know always know if he’s trying to buy/sell online, or if he’s anywhere outside of a 5-mile radius.

Kids are always going to want new things, but we need to find a way to control this need. Reading the mother’s tech horror story on your blog inspired me to share my own, because I agree with her completely. Giving kids phones is not the problem. Giving them phones without proper monitoring is.

Does your parenting horror story need to be heard? Let us know in the comments below!