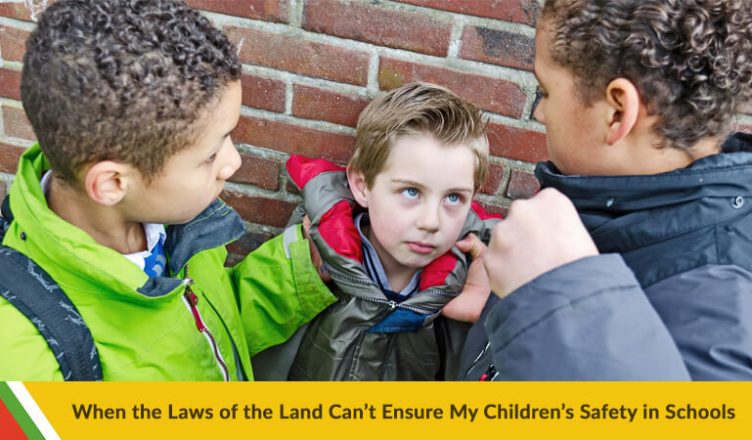 I’m not one to get political. I don’t post long opinion pieces on my Facebook or have unnecessary debates with people in the comments section. I don’t identify with any particular ideology, neither am I rather informative about what wing stands for what. I am however a parent and the events involving school security make me nervous. Like many parents, I have started to wonder if schools are safe for my kids anymore.

When I was a child, going to school was a different experience altogether. We would complain about waking up in the morning and having to spend the long hours with boring teachers. We would laugh and play. We would make friends. We would have fire drills every once in a while to teach us safety precautions. Once, when the news reported the possibility of an earthquake, we had an evacuation drill to teach kids what they should do.

Basically, the things we learnt to prepare ourselves against was Mother Nature itself—earth and wind and fire. Never once in my school years were we taught to protect our school walls from human beings. So when I think about my son going to school now, in times where anyone—and I mean anyone—can breach security lines and wreak havoc in a place that should be a haven for learning and education, it chills me to the bone. I am quite frankly afraid of it.

I don’t know if you remember, but there was an episode on FOX’s Glee on this subject once. They called it “Shooting Star” (perhaps in poor taste), but it tackled the sheer terror that gun violence can cause in schools. For some people—especially for Sandy Hook parents—such a depiction was too soon. Mind you, this episode aired on April 11, 2013. It is now 2017 and I wish I could say that things have changed. The truth is, my children are just as vulnerable to such horrible incidents every single day that they go to school. Nothing in the laws has changed. There exists more uncertainty in our political front. There develop more and more tensions between the people and those whose job it is to protect them. So no, sir; I don’t believe my children are safe in schools at all.

But I also have to make a choice. I can choose to home school my children, but then what? Can I keep son locked up inside our home to protect him from the rest of the big bad world? Of course not. Is any other public place that is safer than schools? I can’t even say. So I choose to let my child have the experience that every kid in America deserves to have—to go to school to get an education and to build a future. I can’t go to school with them either. But I can still be connected with them while they’re there on some level.

It’s why I decided that I’m going to put the GPS tracking app on my son’s phone so that I am able to track him. Because while it won’t protect him, it makes me a feel a bit better, knowing where he is at all times.

That’s exactly why I am tracking him with this mobile spy app now. I want to know whether he has gotten home from school safely while I am at work. I want to know if he is at football practice, or if he has gone to grab a scoop of ice cream with his friends, or if he is at the camping trip and staying within the secure bounds. It just makes me feel a lot better being in the know. It is much, much better than not knowing. Being on the outside, wondering where on earth my son is when I can simply find out.

I know a lot of parents don’t agree with such close monitoring and tracking of their children. I try not to be too intrusive. With this app, my son doesn’t know that I’m tracking him or that I am constantly worrying about him. I want him to be able to live his life carefree and have all the right experiences that would help him grow. I want him to know that he cannot live his life in fear. He should be facing the world head on without thinking about everything that could go wrong. I’m the dad—it is my job to worry about my kid’s safety. It is his job to live his youth to the fullest.

My GPS tracking app is something of a parental security blanket. Do you remember how Harry Potter would look at the Marauder’s Map even after he had left Hogwarts, just to see if his friends were still there? That’s what I do. Whenever I am nervous, I curb my paranoia to take a look at the map to see if my son’s still in school or practice or wherever he ought to be at the time. I will probably never stop worrying as the parent, but I can make myself feel better. So I do.