Majority of the cell phone apps out there make themselves sound like the ‘best’ choice for monitoring cell phones out there. But not every app is offering users, with everything they could possibly need from a cell phone monitoring app.

XNSPY has been providing its users with a smart monitoring solution for their children control and employee monitoring with a wide range of features such as GPS tracking, monitoring conversation, call log history, call & ambient recording, hence, it pretty much covers every area. This reliable cell phone monitoring app has further sweetened the pot by releasing five new features for the latest v5.3.2.

The pace at which technology is improving, every day brings something new to the table especially in terms of software. Due to this, XNSPY strives to keep up with the ever-changing technology and is committed to the goal of innovation and ultimate user satisfaction.

One can never be too safe out there in the cyber world. In some cases, no matter how many protective measures you take – predators, hackers, bullies find some way or the other to disrupt one’s life on the internet. Children especially are extremely vulnerable and it has become vital for parents to take one step further in terms of monitoring.

XNSPY was especially designed to resolve the dilemma of internet security as well as protecting one’s children from the dark dangers that are lurking out there both in the real and digital world. This smart and intelligent cellphone monitoring app has not only proven to be a great solution for worrying parents of teenagers with its amazing features but has immensely helped employers too.

With the help of this app, many employers were able to get rid of their unfaithful employees who were leaking confidential company information to rivals that affected the company adversely. They were also able to catch those right on time, who could potentially harm the business in future.

XNSPY app lets the users stay abreast of all the activities of the monitored person via their cell phone. Cell phones are the biggest secret keepers. Now as everyone owns a cell phone, it has become easier to monitor someone’s activities if one has gained access to the person’s cell phone whom they wish to monitor. They can get the information about them and not only their whereabouts and their contacts, but their social media activities as well.

With the new features, the developers have excellently covered some more areas that could largely help the users in keeping themselves updated with cell phone activities of the monitored person.

These five features will let the XNSPY users take their monitoring experience up a notch. The users having the latest version of the app can benefit from the new features and those with v5.2.9 will have to update their apps to the latest version.

The XNSPY’s new features include:

WhatsApp without Root (Android only):

WhatsApp is undeniably the most preferred app for instant messaging and looks like it is going to replace the regular text messaging soon enough. People tend to use the platform extensively as compared to texting and it is on WhatsApp, that most of the conversations take place nowadays.

Tapping in on WhatsApp could let one know a lot about the conversations of the monitored person. The new WhatsApp without Root for XNSPY’s Android users allows them to monitor the app without a root. 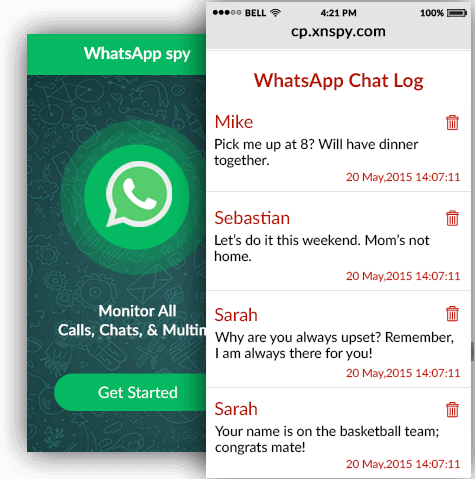 Because of this feature, XNSPY’s Android users can have an enhanced monitoring experience on WhatsApp.

Internet security is an important issue and especially parents ought to know the kind of websites and material children are looking up on the internet. Sometimes, through an unprotected Wi-Fi or internet connection, the cell phones might be at risk. So, it never hurts to know the Wi-Fi network details, the monitored device is logging.

XNSPY was already providing its users with access to call logs. Now, the new Wi-Fi network logs keep the parents and employers informed regarding the Wi-Fi connection the monitored device has connected to with the necessary details like date, time and the location of that certain Wi-Fi.

This feature is an added plus if the teens or tweens seem to be lying about their whereabouts to their parents or an employee seems to be acting suspiciously. Knowing about the Wi-Fi connections the device gets connected to allow the user with a wider picture so that they can assess the situation and make an informed decision.

The keylogger feature is another quality, which is bound to enhance XNSPY users’ monitoring experience. As the name suggests itself, the keylogger feature records or ‘logs’ in the keystrokes. With the help of this feature, the keys that are pressed on the monitored devices are recorded.

XNSPY allows you to know who the monitored person is talking to but this new feature allows one to tap in the keystrokes made on the following apps:

With XNSPY’s new keylogger feature, the monitored person’s keystrokes are logged when the aforementioned apps are used.

XNSPY allowed its users to record the calls as well the numbers from which most calls are received and provided the users with ‘Top 5 Callers’ and ‘Top 5 Call Durations’ of the monitored device. With the new call analysis, one can get an insight to the monitored person’s cell phone use and behavior.

With the help of this information, the users can now get a better knowledge of the target device user’s cell phone behavior. These stats include both the top 5 call durations and callers.

As mentioned before, internet security is extremely important and both parents and employers should be aware of the sites their children and employees are visiting. The internet has both the good and bad and it is safer when one knows the kind of content that is being accessed via the monitored device.

XNSPY’s browser history analysis gives the users the Top 10 visited websites list which includes websites that are frequently accessed by the monitored phone.

Those still using the older version of the XNSPY app, should update their apps and get hold of these great features right away.