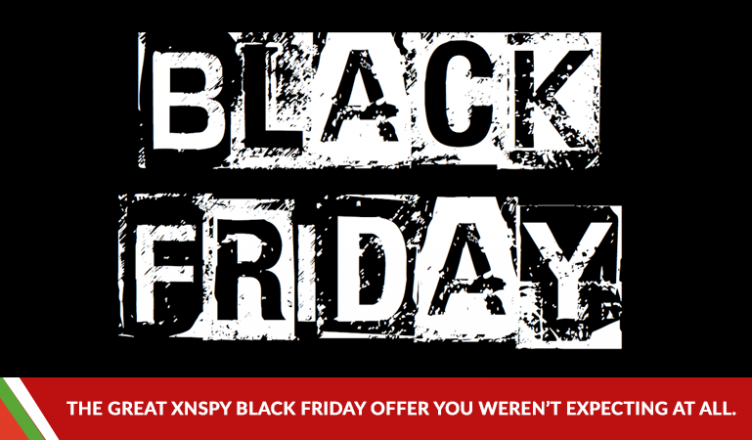 Okay, folks. Time to reveal what we’ve got in store for you for the big Black Friday sale. Spoiler alert: it is much, much more than some silly old discount where you’ll get a bang for your buck, oh no. This time around, we made sure we amp up our Black Friday offer to a level that you were not expecting at all.

So here we go. Here’s what we’re giving you this time around:

For Black Friday 2016, you’ll be able to get XNSPY in all its glory—all packages, all subscriptions, all versions Android and iOS—for 25% off. If you’re already a subscriber, it means you’ll be able to get the upgrade you’ve always wanted at a bargain. For those of you who were lurkers here and never really got a chance to experience our products in the digital flesh, here’s your chance. Avail the offer while it’s good on you, because that’s not all.

The Compatibility Upgrade for iOS 10

XNSPY is now compatible with the new iOS 10! This means all iPhone users—and yes; I mean ALL—will be able to enjoy our services hassle free. I know some of you had a minor compatibility issues when you switched to the iPhone 7. But we made sure that our app was one hundred per cent functional before we brought it out for you. So now you’ve got it! Our iOS services are now fully and thoroughly functional on every iPhone and iPad, no matter what your iOS version. These are available for both the Jailbreak and the NoJailbreak versions, and can be utilized on whichever subscription you choose.

Think we’re going to stop at upgrading our iPhone users only? How very wrong you are. The iOS is not the only operating system that’s getting an upgrade on our software. We’re also bringing big news for our band of Android users because come Black Friday, all of our services will be one hundred per cent compatible with Android Nougat. Doesn’t matter if you’re rocking the new Samsung Galaxy S7 or waiting on the S8, we’ve got your back as far as your monitoring needs are concerned. We’ve fixed any bugs that may have come your way in the earlier versions and we are now faster than ever. We’ve heard that the new Samsung Galaxy S8 might be a pretty fast smartphone, so we wanted to prepare ourselves. It’ll also be compatible on Google Pixel, for those of you who have chosen to go for Google’s very own smartphone.

The Software in German & French

That’s not the last of it, folks. We’ve upgraded big time and the Black Friday offer goes on. This holiday season, XNSPY will be available in not one but two new languages—German and French!

For those of you who do not know, XNSPY vowed to go global around this time in 2014 and made some big promises to its users around the world. Since then, we’ve been working hard to make sure we can reach out to our clientele round the globe, in places where they are most concentrated. We wanted to give them complete ease of access that isn’t barred by language. So we began by offering our services in Spanish and Portuguese. This was quite successful, I must add. We got an overwhelming response from Spanish and Portuguese speakers around the world. We even started separate official blogs in those languages so that we can connect with native speakers in the same way we do with our English speaking audiences. Eventually, we wanted to expand to other languages as well where our prospect clientele may reside. And so we’ve brought you our German and French versions! We will continue to keep on expanding to other languages till we’ve left no stones unturned.

So, there it is: your amazing Black Friday offer in all its glory. This year, we wanted to go big. So we gave you much more than just a discount. We wanted to give you a one of a kind offer with a monitoring app that is bigger and better than ever. Don’t waste any more time. This offer is valid for Black Friday through Cyber Monday. Avail it now and get the complete package of benefits that we’ve been working on for the holiday season!