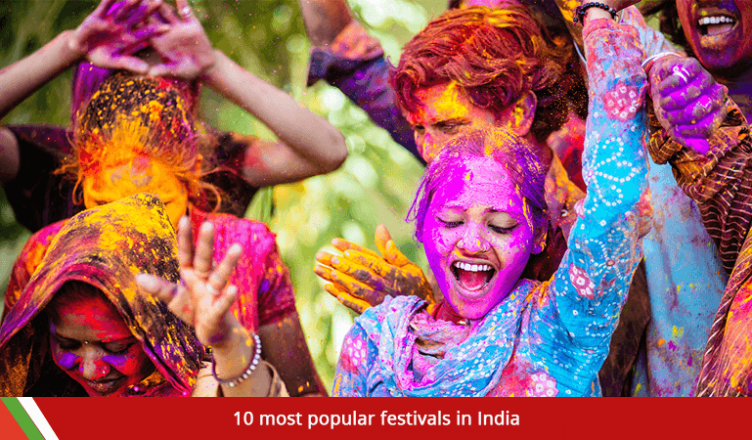 Holi is perhaps the most renowned festivals celebrated in India. Known as the “Festival of colors”, Holi lasts for a full night and a day. The central basis of Holi is the burning of a demoness called Holika. People in India celebrate the festival by throwing powdered colors and colored water at each other. People from all parts of the world visit India to participate in this festival.

Diwali, also known as the “Festival of Lights”, is celebrated across India to commemorate the victory of light over darkness. The basis of the festival lies in Lord Ram returning to Ayodhya with his wife after defeating Ravan. People celebrate Diwali by lighting clay lamps, candles, and fireworks.

Durga Puja, also known as Durgotsava is a prominent festival celebrated in different parts of India and Bangladesh. It is celebrated to pay respect and homage to the Hindu goddess Durga. The celebration lasts for a total of 10 days, with the practice of several rituals.

The Ganesh festival lasts for eleven days to celebrate the birth of Lord Ganesha, the elephant Hindu god. Large statues of Ganesh are displayed in homes and public areas. The statues are also heavily decorated with different colors. On the 11th day, the statues are carried through the streets, with people dancing and singing along.

Onam is the most prominent festival celebrated in the southern Indian state of Kerala. It is celebrated to commemorate the arrival of King Mahabali. People decorate the floor just outside their homes, with ornaments to symbolize the welcoming of the king.

India has one of the largest Muslim populations in the world, and Eid ul Fitr is celebrated by Muslims at the end of the Fasting month of Ramzan. The festival lasts for three days. Sweet dishes are typically prepared at homes, and gifts are exchanged with family members.

Raksha Bandhan, also known as Rakhi, is celebrated on a full moon during the month of Shravana. According to popular beliefs, the festival is celebrated to commemorate the Hindu god Yamuna tying a thread on deity Yama’s wrist.

Christmas is widely celebrated across India on the 25th of December each year. Christians believe Jesus to be the son of god and mark the day to celebrate his birthday.

Maha Shivratri is one of the most popular festivals celebrated in India. It marks the day when the marriage of Lord Shiva was consummated. The festival is predominantly celebrated at night where people fast, offer prayers to Lord Shiva, and meditate. The concept of overcoming darkness is a crucial part of the festival.

The Basant festival is predominantly celebrated in the Punjab region of India. The event is held to mark the start of the spring season. Basant is also known as the festival of colors, with people dressing in colorful clothes, typically yellow. Colorful kites are flown throughout the day as well. Basant is among the most eagerly awaited festivals in Punjabi culture.