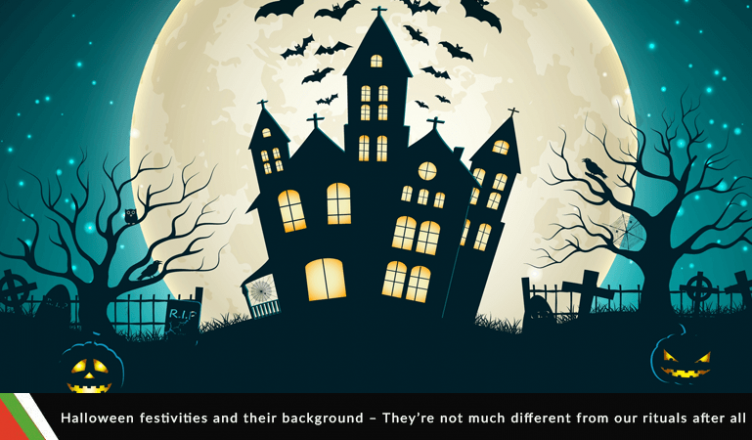 Originally, Halloween is a day dedicated to remembering the dead. It is a widely celebrated event in the West and other parts of the world with varying traditions and rituals. Indians have started getting excited about it lately. Halloween was mostly for the elite whose kids received foreign education or had access to western films, shows, and comic books. But now, since the world has become a global village, people aren’t hesitating in adopting and accepting the religious celebrations and traditional rituals treasured in different religions. No wonder our youth is excited about Halloween that’s celebrated on 31st October each year around the world.  Although it’s not yet acceptable to go trick or treating, Halloween parties have started to become common.

We already know in different parts of the world, Halloween is celebrated with different rituals, but we don’t really know the background of these celebrations. Those who know believe that Halloween is no different than our own celebrations such as Diwali; which we celebrate as a victory of lightness over darkness and good over evil. Now let’s throw some light on Halloween.

Halloween isn’t just a time of the year to dress up in quirky costumes and party all night. It’s a festival that has a deep symbolic meaning. It has a pagan origin in Celtic nations. Halloween is a dark and accursed season. It is believed that the veil between the world of the living and the dead becomes thin which enables the souls of the dead to re-enter this world.  Celts also believed they could communicate with the dead spirits in the hope that their ancestors could guide them about the upcoming year. Witches at midnight perform rituals to communicate with the dead. They use candles, spider webs, and cauldrons, etc. to cast spells. Some of the rituals also involve visiting the graveyards of the dead. The witches mainly dress in black and purple and they don’t harm anyone.

If you are wondering why people like to dress up as ghosts, it’s a tradition, too. People used to stay indoors because of the fear that ghosts could be roaming the earth. They thought of dressing themselves as ghosts so that the real ones couldn’t tell them apart. “Trick or treat” also has a meaning. The poor Celts family used to send their kids out on Halloween to ask for food and money.

Likewise, carved pumpkins that are a part of the celebrations are linked to the story of Jack-o-lantern. It was believed that the devil came for the soul of Jack on Halloween’s eve but tricked him and captured him in a tree. Jack agreed to free the devil on one condition that when he dies, he won’t go to hell. When Jack died, God didn’t let him enter Heaven. Since both Jack and the devil were in Hell, the devil threw a bit of burning coal at him in anger. Jack carved out a lantern on a turnip and put the burning coal inside it. It’s believed that he has been looking for a place to rest ever since. Now, the turnip has been replaced with carved pumpkins.

Bobbing for apples – it’s a Halloween game that has a Roman origin. It became part of the Halloween festivities when the Romans conquered ancient Britain. As per the rituals, young/unmarried individuals have to dunk their heads in a tub full of apples. The one who catches the fruit with one bite is allowed to marry. No wonder apples are candied, baked and sold on Halloween.

Bonfire is also a common practice of pagan worship. Every village and town used to light the bonfire to ward off the evil spirits. Several days before the eve, young boys used to travel the neighborhood to beg for material to build massive bonfires.  It was believed that evil sprits play tricks on humans. That’s why people used to dress in masks and dance around the bonfire pretending they were being pursued by the evil spirits.

The rituals of Halloween feel close to the kind of rituals we perform to ward off evil spirits, right? Before allowing our kids to celebrate Halloween as just a night to dress in a spooky way, why not educate them about its origin so that they can value it more.