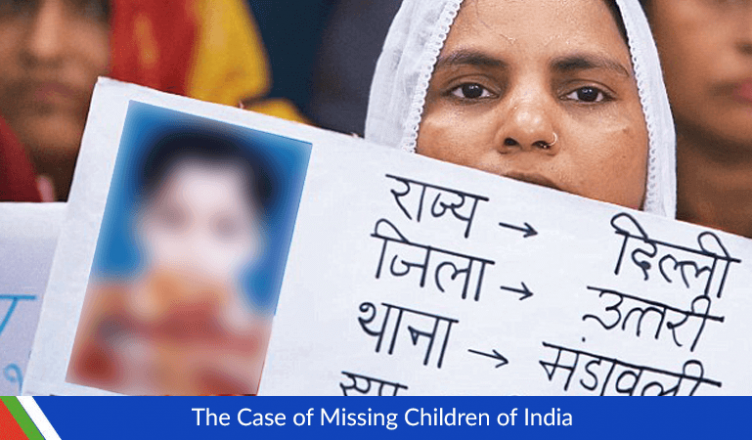 On a day in April 2017, 13-year-old Savitri was accompanying her mother, carrying a flask of tea to her father who was a laborer at a brick kiln, when a group of five men abducted her on the way. One of those five men was from their village. When Savitri’s father was informed about this he approached the local police who then set out to search for the man recognized in the group. But soon their hut was demolished and the matter was swept under the carpet. The police never filed an FIR and the matter became just another statistic. In fact, this is still not a statistic. The child is missing from home but absent on paper. This case of a teenager is a phantom. Just one among a thousand others.

In India, every hour, four children go missing in the country. Almost half of them are never traced back. India is finally confronting its epidemic of missing children. Many activists and organizations have been working tirelessly to trace those missing children. This issue was never in the priorities of the government but after the shocking discovery of the bones of 17 slain girls outside the house of a businessman in the suburbs of New Delhi gradually put this issue on the nation’s agenda.

It’s hard to find the real stats and some reliable figures about how many children go missing in India. The scale of the problem is staggering and according to the official figures of the Ministry of Women and Child Development, a total of 242,938 children went missing between 2012 and 2017. But NGOs and activists dispute this figure and claim that the number is much higher than reported by the government ministries. Child rights activists complain that most of the cases remain unregistered or underreported and that is a chronic problem.

Why they go missing?

Absolute poverty: Perhaps the most prominent and unfortunate reason for the disappearances is destitution. Half of India’s minor population is believed to live in acute poverty. If a farmer had one bad season, it could push the whole family to starvation. Some children run from their homes and often fall prey to trafficking networks. Some of them start working in the cities and lose any contact with their family. In extreme cases, which are quite frequent, parents themselves sell their children or deliberately allow unwanted daughters to stray in busy market places.

Many cases are not reported because police only solve those cases that have any chance of success as their performance is based on the solved cases.

Sold into slavery: Many of those kids that run away from their home due to poverty or mental abuse turn to some people that they think are labor contractors. These people are then sold in the larger markets. Some of the children that are not runaways are abducted. According to the 2016 Global Slavery Index, India had the largest number of slaves. Some girls are even lured by their boyfriends who then sell them into prostitution. There are organized gangs operating with impunity. They know the system and how to exploit the poor ones. They can easily lure, transport, and sell the kids to their employers. Eventually, most of them end up locked in wealthy homes, small workshops, and brothels.

Can we rein in this problem?

According to the data collected by The Track Child, nearly 73,000 are still missing. There needs to be a raft of initiatives to better protect and find these children.

After the hue and cry by the activists, courts have come forward with brave decisions. Delhi High Court said remarked in a missing child case, “Look for the missing children like you would for a criminal”. Indian Supreme Court passed a landmark judgment in 2013 mandating the FIRs of the children. India has finally an online portal by the name of TrackChild which is monitored by the Women and Child Development ministry. This makes the data on missing children centralized.

At an individual level, parents also need to look around their child. Smartphones have become prevalent and perhaps they can be a useful tool in tracking the location of the children. One solution could be that government comes up with an app that can help track children at school or when they are out of the home. This app can be attached to a centralized system for tracking the location of the kids. Parents in the urban areas can use Xnspy tracking app for looking after their kids. Staying close to your kids and giving them emotional and moral support is key in developing a rapport with your child at an early age. It can definitely keep our children away from missing in a cruel world.