Skip to content
XNSPY Official Blog > Parental Control Apps > Not Reading to Your Children Could Leave Them with a ‘Million-Word’ Vocabulary Gap, Says Study 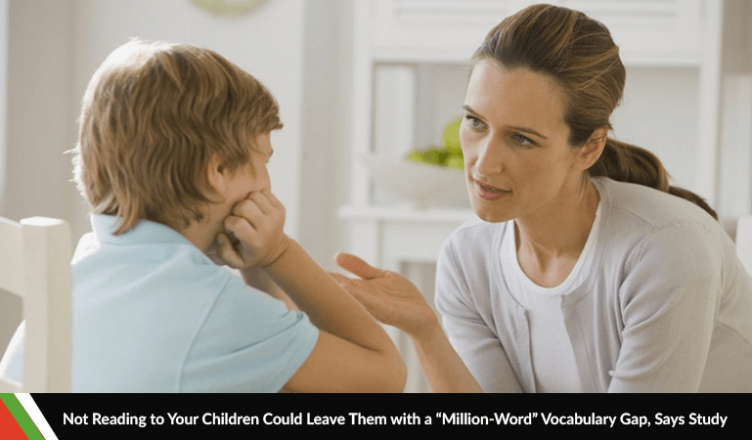 Reading has a number of intellectual benefits for both children and adults alike. Over the years, studies have shown that how beneficial reading is for one’s psychological well-being.

According to Jessica Logan, the lead authority of the study and assistant professor of educational studies at The Ohio State University, this million-word gap could be a substantial clue that explains the differences in the reading and vocabulary development. Even the kids who read one book per day would know about 290,000 more words by the time they are 5 years old than those who don’t read books regularly with their parent or guardian.

The kids who hear more words will be better prepared when they see those words in print as they enter school, says Logan. They are more likely to pick up reading skills. Logan also happens to be the member of Ohio’s State Crane Center for Early Childhood Research and Policy. The study is titled When Children are not read to at home and authored by Jessica Logan, Johana Chaparro Moreno, and Melike Yumus. The study appears in the online edition of the Journal of Developmental and Behavioral Pediatrics. It is expected to be published in the future print edition. It investigates the casual and correlational influences of reading on the vocabulary development of a child.

Logan reports that she got the idea of this research from an early study of hers that revealed that parents don’t read to 1/4th of children in a national sample and the remaining 1/4th were read to once or twice in a week. The fact that parents seldom or never read to their children was shocking and, we wanted to know how it impacted the kids and what it meant for them and their development skills.

South African College of Applied Psychology states that studies reveal that reading books lead to more creativity, mental flexibility, stimulates the brain and increases empathy for others. There is no other way to increase your vocabulary than reading. Few studies have explored the relationship between vocabulary and reading in young children. A new Ohio State University has studied children younger than 5-years-old. It has found out that children, with parents who read them five age-appropriate books every day has about 140-228 words on average stepped into kindergarten with a rich vocabulary for 1.4 million words.

The researches collaborated with the Columbus Metropolitan Library and were able to identify the 100 most-circulated picture books which targeted preschoolers and board books which targeted infants and toddlers. Logan and her colleagues in the study selected 30 books in total from both of the lists and then counted the words in each. The picture books (for the preschoolers) contained 140 words on average and, board books (for infants and toddlers) contained 228 words on average.

With the help of this information and on the assumption that children are read board books until they are 3 years old and picture books till they are five, the researchers were able to calculate how many words a child would hear from his birth till kindergarten. The researchers assumed that the kids would be read board books through their 3rd birthday and the picture books till their 5th birthday.

The results revealed that children whose parents read them five books a day hear more than 1.4 million before they start kindergarten.

How many words do kids learn at home?

Here is a detailed breakdown of how many words kids would have learned by the time they are 5 years of age.

Logan says that the word gap of more than a million words is striking between a child who is never read to and a child who is. It is important to note that the word gap which is examined in this research is not the only gap the children have to come across with. As per a controversial study that took place in 1992, children who grow up in poverty hear 30 million fewer words in conversation by the time they are three=years-old compared to those who belong to more privileged families and sound backgrounds. Logan reports that the other studies which took place since then negate it and suggest that this 30 million word gap might be smaller or doesn’t even exist. She says that the vocabulary gap which is observed in this study greatly varies from the conversational word gap and therefore, might have different effects on children.

It is crucial to remember that it is not about everyday communication. The words which children get to hear from books are new, complex and difficult than the words they hear by talking to their parents and others at home. Take the example of a book about penguins. It will have words and concepts which are quite unlikely to hear in an everyday conversation. When children hear words from books which parents read to them, they have special importance in learning to read. Also, the time is great to bond and one of the best parent-child memories.

The million-word gap found in this study is expected to be conservative. Parents would often talk about the book they are reading with the children or even add elements or dimensions to the book on their own if they have read the book many times themselves. This talk would lead children to learn new vocabulary words from their parents and add to their vocabulary.

Overall, this study is all about the importance of reading and the importance of parents reading to their children. Exposure of vocabulary and learning new words is good for kids of all ages. It is suggested that parents pick up age-appropriate books for their kids. When children have grown out of the age where parents read to them, both parents and kids could go and buy books together.

This could be a healthy activity that not only creates a bond between the parent and the child as they read together but open a new dimension to the imaginary world and unlocking creativity where the child could be whatever he wants to be.