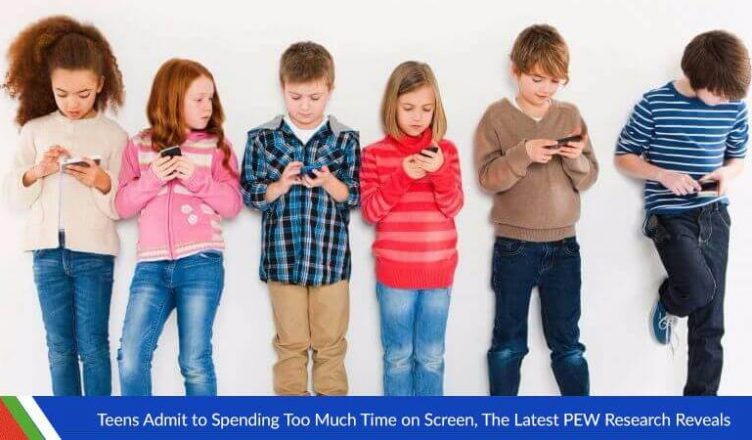 Majority of the parents are rather concerned about their teens’ screen behavior. Teenagers seem tethered to their smartphones and spend a lot of time using them. But the newest Pew research reveals that a large number of teens also feel the same way about their screen time behavior.

In a large survey of 1,000 parents and 743 teens (13 to 17 years of age), the Pew Research Center found out that 54% of the US teenagers and 36% of the parents felt they spent a lot of time on their smartphones. More than half of the teens also reported their parents or caregivers being distracted while having a conversation with them. The relationship between the teens and their phones is called ‘hyper-connected’ in the study. It also finds that 74% of them check their messages and notifications as soon as they wake up. Some of the parents also do the same but at a relatively lower rate – 57%.

The research found that more than half of the teens (52%) had taken measures to cut back on their screen time and phone usage particularly social media (57%) and games (58%). Both teens and parents reported their family members being distracted constantly because of their phones in family gatherings.

The findings from this study are both encouraging and worrisome. In another study, two-thirds of the parents expressed their concern regarding their teens’ screen time. 57% of them reported having set screen-time restrictions or monitor their screen usage in some way. The report comes amidst increasing concerns that teens were becoming addicted to their smart devices.

The big sharks of the tech industry are facing a backlash against the addictive nature of their apps and gadgets. The immediate entertainment, the constant notifications, and other features keep the users hooked to the screens. The effects of excessive screen usage and how parents can curb the screen exposure has led to numerous debates and discussions. Tech giants like Apple and Google have announced products to assist both adults and teens so that they can monitor and effectively manage their phone use. Earlier this year, Apple announced that its next smartphone operating system iOS 12 would have Screen Time feature. This will help users track how much time they are spending on their cellphones.

Screen Time breaks down the total usage by the app so that users can set time limits on the apps they feel they are spending too much time on. Google also has a version of such a feature called Digital Wellbeing. It breaks down the usage according to the time spend on certain apps. And not only that it also tracks the notifications to users can set timers for themselves.

Teens show mixed views regarding their screen habits. 54% of them believe that they spend a great deal of time on their cellphone whereas 41% of them said they spend most of their time using social media apps. Ipsos MORI conducted a study in 2017 that revealed that majority of the people checked their smartphone about 47 times per day. The younger people from the surveyed group had a frequency of checking their smartphone twice as high – about 86 times a day!

A total of 47% of the people surveyed said that they were trying to reduce their screen time and were taking necessary measures to curb their screen use. People reported that they were making efforts to lessen the time they spend with their phones by logging out of the social media sites, turning it off or keeping it out of sight.

But looks like the measures taken for controlling screen time, are not panning out that well. An average US adult spends about 215 minutes per day, on their mobiles. This time limit is expected to increase in the future. Tech companies currently find themselves in troubled waters as on one hand they want to build engaging products, on the other, they also realize how real the issue of digital addiction is. Time will tell how tech companies like Apple and Google are able to promote their products while preaching a healthy digital lifestyle.