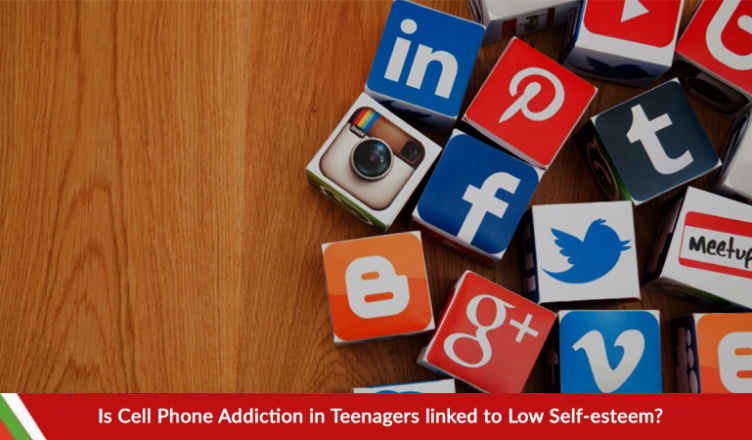 Technology advancements have brought profound changes in people’s habits in recent years, particularly regarding the usage of smartphones, instant messaging apps, and social media apps. Research reveals that teenagers who were frequent users of smartphones could be addicted to these devices due to low self-esteem issues.

Teens and tweens use their cell phones a lot and, this is putting their both their physical and psychological health at risk. National surveys reveal that our children today are anxious than ever and the suicide and depression rates are increasing alarmingly. These issues seemingly increased about the same time when cellphones became a necessity for most of the teenagers. American teens faced quite a drop in their life satisfaction and self-esteem since smartphone ownership jumped from zero to 73% which led to an increase in time spent online.

While talking about a correlation, it is important to understand that it doesn’t mean causation. At the same time, one has to pay attention to the fact that how rapidly the rates of mood swings, low self-esteem, and self-reported anxiety have grown in teenagers since the advent of smartphones and access to social media. This technology both connects and isolates a person.

If you think about it, there is definitely something addictive about getting a notification on your cell phone. Seeing that you got a lot of “likes” on your photo certainly makes us feel great telling us how much people like us. A study was published in a Journal Emotion by the psychologists from San Diego State University, and the University of Georgia collected data about media and mood from about 1.1 million U.S. teens. The aim behind this study was to find out why the increase of satisfaction and happiness that span over 10 years shifted in 2012 and kept on dropping for the next four years?

The researchers tried to find an answer by collecting responses from 8th, 10th, and 12th graders about their feelings regarding life and how they utilize their time. The findings of the research revealed that since 1991 and 2016, teenagers who were spending most of their time on screens and electronic communication such as social media, texting, games, and Internet were less satisfied with their lives, were less happy and suffered from lower self-esteem. This observation carried on for about two decades. And during that time TV watching declined but that also related to lower psychological well-being.

Teenagers, who spend more time doing activities that did not involve screens or technology had better psychological well-being. They experienced higher self-esteem, happiness and were more satisfied with their lives overall.

By 2012, half of the American population in which 37% were teens owned a smartphone. By the year 2016, 77% of Americans had an iPhone or a smartphone which included about 73% of teens. According to a few other studies, the more time a child spends on social media and engaged in online activity, the unhappier he will be.

Recently, specialists from the Department of Psychology led a study among high school and university students which showed that such variables of personality exist, which incline to suffer from smartphone addiction. The findings revealed the existence of four fundamental features of addictive cellphone use in teenagers. Among them, the one that ranks on the top is low self-esteem followed closely but low level of emotional stability and responsibility. In order to achieve these results, surveys were carried out that included a self-esteem and personality test of 250 students. According to experts, these two characteristics are increasing so people suffering from low-esteem, have a greater inclination to suffer from cell phone addiction.

The researchers say that we are currently in the presence of a new communication pattern where cell phones have become a necessary accessory in society including the teenagers. Cell phones let teenagers create a parallel reality and fill a void in their life in that phase of their lives when they question everything and even their existence.

The Responsibility of Parents:

According to parenting professionals, taking technology away from the children is not the ideal solution as it would take them away from the environment they feel connected to. Plus, they have grown with screens around them so, you cannot possibly take all of it away from them. But, it is suggested that parents should take responsible measures to control the use of screens and networks their children use. Also, it is essential to keep a track of the people their children are interacting with so that they do not get into any trouble in the future.

Here are a few ideas:

You can do without certain applications:

Every day youngsters download various apps. You can ask your children to uninstall apps you think your children are spending too much time on. Some apps are not helpful at all and act more like an interruption. They do not help with the daily activities but act as a hindrance. So, see that your child has only those apps that are actually important for study and communicating with friends and family.

Establish some rules for device use:

As children grow up, they eventually learn to prioritize things. But as long they are teens and learning to become an adult, it is your responsibility that you establish some rules in your home. Cell phones and the constant notifications are a permanent distraction when preparing for a test/exam or school work.

Everyone should keep their cell phones away during meal times. Apart from that see that the device is set aside during study hours and before sleep, too. Using cell phones before sleeping messes up the sleep cycle.

Marketing companies and mobile companies developed some trends that determined that a phone is reviewed 100 times a day on average. Now take some time and evaluate how cell phone addiction is affecting your children’s lives and studies.

Teach your kids and make them understand that they cannot be glued to their devices every second of the day. They should take breaks and set aside some technology-free time for themselves so they can indulge in some other healthy activities as well.

One of the greatest gifts a parent can give to his child is a positive sense of self. Children with high self-esteem feel loved and grow up to be competent, productive, and happy people.

You could take some help from these tips to build a positive self-image as he grows:

Let them do some things on their own: As a parent, you would want to help your child so that things get done faster. But, you have to be patient and let them work things out on their own. The more challenges they come across, the more competent and confident they would feel that you trust them enough to be on their own.

Give them choices:  You can play quite an important role in making them feel empowered. Give your children choices. Of course within a reasonable set of options which you can preselect for them. But, give them the chance to decide for themselves. When children learn to make simple choices of their life when they are young, it helps them in preparing for the more difficult choices they will have to make as they grow up.

Avoid comparison: Avoid comparing your children with their siblings, their friends or your friends’ children even. It is unhealthy. This does a lot of damage to a child’s self-esteem. Not to mention adds pressure on your child and he might end up resenting their siblings or friends. Appreciate your child’s individuality and his special talents and skills. Tell your child hat everyone is unique and with their own traits and personality.

There’s nothing wrong with making mistakes: Teach your children that no one is perfect. Tell them that it’s perfectly normal to make mistakes. It is actually a learning process. Tell your child that no one expects them to be perfect. Being good enough is pretty great as well. How you respond to your child’s mistakes, impacts greatly on their personality and their self-esteem in the process.

Do not subject them to sarcasm: This is extremely important. We forget what we are saying when we angry. Remember, they are YOUR children. So never belittle them or their feelings. Whenever you are angry, take a short break so you don’t end up saying anything that you would regret later on. Adults have a different way of dealing with things but your children, are still young. Avoid passing sarcastic comments to make a point. Dislike the action, not your child and make sure you clarify that to your child.

Spend time with your child: Children need your attention and time. No matter how trivial, do something together. It could be a bike ride, running some errand together, grabbing a bite to eat or just spending lazy hours together. It can be a great way to get involved in their lives and learn what is on their mind.

Following these tips could do wonders for both your child’s self-esteem and your relationship with them.