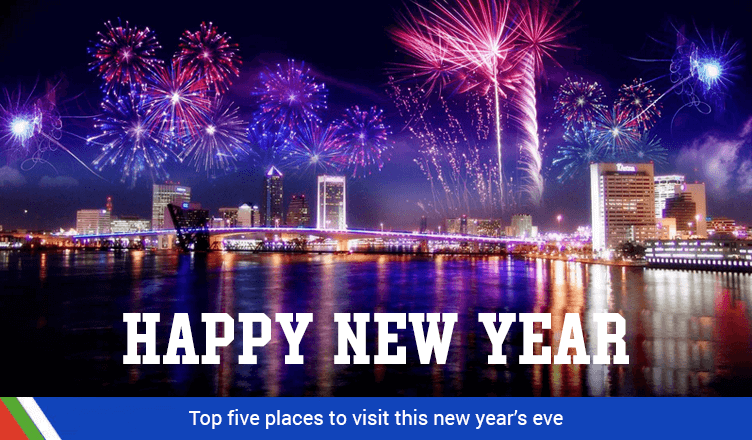 New Year’s eve is celebrated each year across major cities of the world. Some cities offer far more than others. Are you planning to travel this new year’s eve for a taste of local culture, or to enjoy nightlife?

We have prepared a list of the top five places that you can visit this new year’s eve.

Sydney is one of the first major cities to celebrate New Year’s. The main event is held at the city’s harbor with splendid firework displays. Images from the event are beamed live across the planet because the city welcomes the new year earlier than others. The fireworks last for a total of 12 minutes, with 1 minute dedicated to each month of the year. Fireworks from the Sydney Opera House and the Harbour Bridge are exceptional sights that you need to see once in your life. These factors make Sydney an incredibly attractive option. You do not want to miss this!

Dubai has transformed itself from an endless desert to a city with massive man-made structures as far as the eye can see. The city has a reputation for being a place where the east meets the west. Dubai has a fascinating nightlife that blends western and eastern culture, so you will find ample opportunities for parties and events according to your taste! Some of the most amazing firework events are held on new year’s eve at the iconic Burj Al Arab Jumeirah and the tallest building in the world, Burj Khalifa. The city is known for its grandeur and it showcases that on new year’s eve. Do not miss the chance if you plan to go there.

Rio de Janeiro is one of the most splendid cities in the world. It is quite large as compared to other cities in South America, but don’t let this fool you into thinking it can be boring. The Copacabana beach is known across the world as among the most beautiful beaches. The city is widely famous for its unique cultural events too. The energy of the city is also visible on New Year’s eve. There are over two million people that throng the Copacabana beach at midnight! That is a sight you do not want to miss!

Tokyo is among the most densely populated cities in the world. The fireworks and parties are typically held in the Yokohama area of the region. People from across the world visit this city for New Year’s Eve every year. Residents of the city pride themselves on their unique history, but that does not mean there won’t be any party for you to enjoy! As with Dubai, there is a mix of western and traditional culture. You can visit many temples in the city if you want to celebrate a bit more traditional New Year’s Eve. Either way, you’d have plenty of options!

New York: All cities on this list have their unique set of customs and traditions according to which they celebrate New Year’s Eve. However, New York is one city that surpasses all others in the amount of attention it attracts from every corner of the world – more than a billion people turn on their television sets for the occasion! The city’s famous Times Square is a sight you do not want to miss!