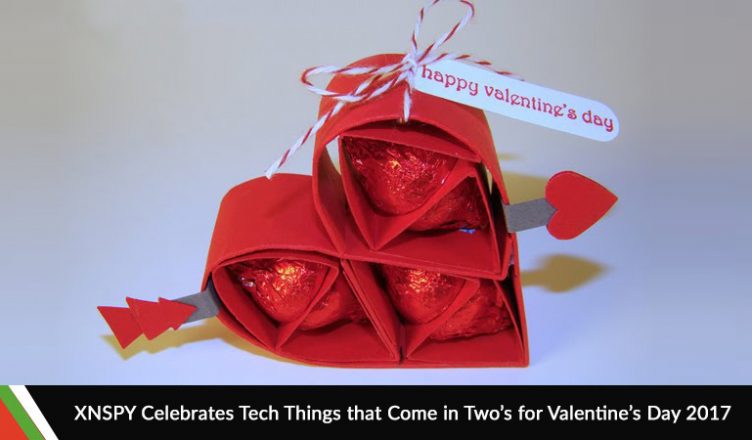 Could a VHS have ever worked without a VHS player? What use would a gramophone be if no one made records? What would cell phone companies do if they didn’t work hand in hand with network companies? Be it printers and ink cartridges, gas and cars, laptops and operating systems, tech has always come in twos. Can’t have one without the other. Now, some may link this system back to capitalism and suggest that this is at its very core a form of consumer exploitation. But we’re not that cynical here at XNSPY. We find that there exists a certain romance in these odd pairings. One’s utility is null and void without the other. Each are a significant part of each other. And while we’re keep on searching for ways to find a way to combine their forces (after all, BluRay players and BluRay discs are being replaced by streaming services like Netflix), it’s either both of them or neither of them. Now that’s a love story we can get behind.

So, this Valentine’s Day, let’s celebrate some of our favorite tech pairs that we have loved to see together over the years.

The first in our “can’t have one without the other” list are the founders of SlideShare, the hosting service that lets people share PowerPoint presentations, PDFs files, word documents and the like. The husband and wife duo created this service together back in 2006. Rashmi has even made the Forbes “Most Powerful Women Entrepreneurs” list, so we already know this is a power couple. While she is the CEO of the company, Jonathan is the CTO. And now that their company’s been acquired by linked in, the only way the couple can go is way up.

These are two people who have been born and bred in the tech world. Marissa Mayer made her way through Google, working in Google Search, Images, News, Maps, Toolbar and Gmail. She played an instrumental role in helping Google acquire Zagat. And then she moved onto her current role, the role that has made her a household name: CEO of Yahoo! Mayer is married to Zachary Bogue who works with Data Collective, a big data company in the Bay Area. He’s worked with big data in the past and with startups as a venture capitalist. So, as far as tech couples go, these two have made a name for themselves.

This is an interesting one. Sheryl worked for Google before she made her way to Facebook as the COO. Dave sold his company to Yahoo and made his way to becoming the CEO of SurveryMonkey. Both are working for one of the biggest websites in their respective fields. But both have mastered the work life balance perfectly. Both have decided that yes, they have important jobs and that these big companies might as well be a mess without them. But they’ve also realized that they have a family together. So they clock out at 5:30 and make it home in time for dinner. Now if that’s not a couple that has it together, I don’t know what is.

The AirPod and the iPhone

Ah, a tragic pair from the start, the AirPod and iPhone’s is a love that will be talk for years to come. This is a couple that is meant for each other, but who people have tried to keep apart from the get go. AirPod has suffered mockery, ridicule, rejection at the hands of the people. iPhone’s been told that they it’s better off without the AirPod. AirPod’s been told that it’s too bold for the humble iPhone. iPhone’s tried to convince everyone that they’re just not ready for someone like it, that’s all. They’re meant to be together, yet people insist on keeping them apart. A tragic love story, indeed.

Your Kid’s Cell Phone and XNSPY

And finally—you know we had to do it—our favorite couple of all is your child’s cell phone and our parental control, XNSPY. It just goes together. Would you make your child peanut butter without jelly? Or a baseball without a glove? It goes without saying that when you decide to get your child their very first cell phone, it should come equipped with a parental control app. It’s not just for their safety, but for their overall well being as tech citizens of the world. We’re going to say it again: they just go together.

What are some of your favorite tech couples?