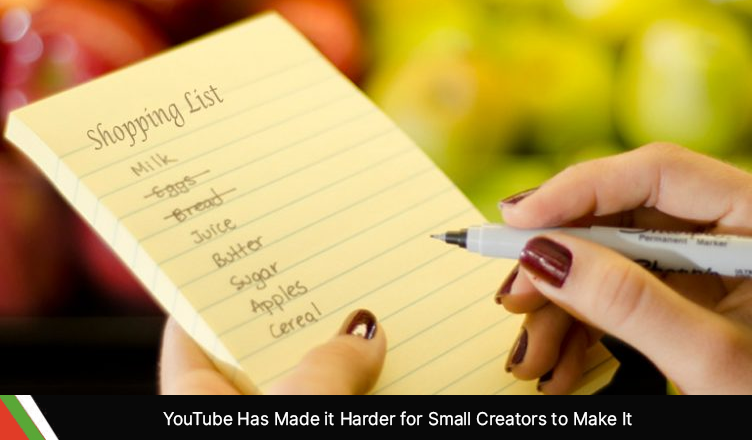 YouTube announced even more changes to it’s platform this past week that greatly effects all small creators on the platform. There has been massive outrage and backlash as small content creators have been stripped of their ability to monetize their videos and to earn a living off of their videos through ad-sense income. This greatly discourages any small time creators to put in effort into their content and pass time when YouTube isn’t going to be helping them as much.

For anyone creative out there just looking for a platform, YouTube might not be the best place anymore.

Long ago when YouTube was still budding and establishing its user base and community, they announced a partnership program with its creators. They said that they would display ads on videos of any creator who would agree in exchange for a nominal fee. It really wasn’t hard to join the partnership program and anyone making regular content at a small scale had more incentive to keep making videos.

Then in April of 2017, YouTube announced a few changes to the partnership program saying that, okay we have some requirements, you need to have 10,000 lifetime views on your channel for ads to be eligible to be placed on your videos. You get those 10,000 views and you are eligible to have ads on your channel and videos.

But as of this week, YouTube changed these rules and stated that you need to have 1000 subscribers and 4000 hours of watch time of the last 12 months.

You don’t have to get those views on just one video, it’s the total time on your content for the last 12 months. So depending on what type of content you create, you’re going to be effected differently. And if you had already met the previous requirement of 10,000 lifetime views, you would still not be eligible for the YouTube Partner Program.

On it’s Creators blog will allow us to significantly improve our ability to identify creators who contribute positively to the community and help drive more ad revenue to them (and away from bad actors). These higher standards will also help us prevent potentially inappropriate videos from monetizing which can hurt revenue for everyone”

The company made a point of noting the types of channels that will be affected by the new rules. “Though these changes will affect a significant number of channels, 99 percent of those affected were making less than $100 per year in the last year, with 90 percent earning less than $2.50 in the last month. Any of the channels who no longer meet this threshold will be paid what they’ve already earned based on our AdSense policies.”

Why Does This Matter?

YouTube is a huge platform for everyone. If you’ve ever noticed your kids on their phones in the last few years, they’ve abandoned tv for YouTube. YouTube is the biggest media outlet and source of entertainment for them and once they grow up, they’ll sure want to take part in it too because that’s the nature of YouTube.

The 4k watch time and 1k subscribers isn’t that much of a big deal for anyone who has consistent views and uploads.

But for any animators using YouTube as their platform, this is just another stab in the back following a long history of back stabs. YouTube is just not a place for animators anymore as a minute’s worth of an animated video can take months of work. And if YouTube does everything it can to work against its animators then it’s really not worth t.

Why Did This Happen?

A lot of people will be blaming Logan Paul for this version of ad apocalypse, which is actually not true. These measure were put in place to actually protect YouTube from another ad apocalypse. The rules in place are to combat disturbing content such as the “Spiderman Elsa” type of content that sprouted up. That type of content showcased itself as cartoon and child friendly content but it was anything but. It was a hyper sexualized and disturbing content that earned a lot of money through ad revenue. This is something YouTube and Google want to avoid.

YouTube is still a platform for budding creators but the website’s prime goal is to make money for Google and itself. This change will absolutely effect small channels while the bigger or mid-tier channels will see not much of a change. Smaller YouTube content creators will now have to work a lot harder to start making money off of You tube’s Partner Program

XNSPY is a great tool to track what type of content your child is following and might eventually try to replicate once they start creating their own content on YouTube. If they’re watching harmless material and wish to make their own, you can ‘surprise’ them with a brand new camera and equipment like that. If they’re doing harmful things like pranking innocent people and attempting stunts that might hurt them, you can intervene before any of that happens.

Use XNSPY as a tool to monitor their behaviors too!