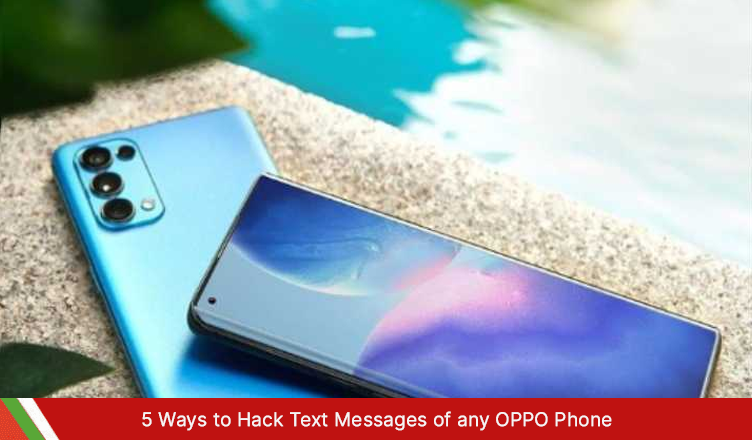 OPPO phones are based on Android’s architecture. It means they run on Google’s Android operating system and are therefore just as easily hackable as other Android devices. Users may want to spy on text messages remotely for several reasons. Kids can get bullied via SMS messages and they do not reveal it to their parents. Some employees may steal trade secrets and share them with competitors. So parents and employees can find this information useful. So let’s look at some of the ways to hack text messages of any OPPO device.

SMS Trojans utilize the SMS text message format to send and intercept text messages. All of it is done without alerting the user, so they are unaware their OPPO phone got hacked. These Trojans focus on SMS because it remains a popular way to send texts when an Internet connection isn’t available. Another reason why hackers use SMS Trojan to spread malware is that text messages do not consume too much data, so hackers can easily carry out communications in the background using SMS.

When a malicious program is installed, the user becomes infected. These apps range from legal apps that have been recompiled with malware code to malicious apps with a false name and fraudulent download links.

The SMS messages are usually sent without the user’s awareness and come with a charge. Shortcode messages connected to services the malware creator has signed up for, such as “56789,” are used to collect the money. Usually, the victim is not aware that the message has been sent.

These apps can be deleted using the uninstall mechanism on your mobile device; the difficult part is identifying the objectionable behavior and program. Anti-malware software can help by detecting and deleting these applications.

Later versions of Android KitKat included warning functionality for these shortcode messages. It helped decrease the chances of malware spreading. So SMS Trojan is a good way to hack an OPPO and other Android phone brands. It is, however, limited to sending and interception text messages but not reading them.

Kali Linux is a Linux distribution library providing tools for security audit and penetration testing. Hackers can easily abuse these tools for nefarious purposes as Kali Linux provides tools that can hack smartphones.

Hackers can create a corrupt APK file using Kali Linux that can grant hackers access to a user’s phone. If the user downloads the malicious APK file, they transfer access permissions over to third-party users.

This file contains the name of the local IP address as well as a command that establishes a link between the hacker and the target device. Commands to snap images, read messages, and see call records get delivered to the target device. You don’t need physical access to the device to use this method. Rather, you rely on the device’s user to download the file. This method is only useful for spying on Android phones and tablets including OPPO devices.

The downside to the Kali Linux method to hack text messages of any OPPO phone is that it requires technical knowledge of APK files and the Kali Linux interface.

FluBot is another malware that targets Android devices. This malware spreads quickly like wildfire and can leave behind utter devastation. FluBot has infected thousands of devices in a few months. FluBot adapts itself to the phone’s system language and targets Android users through scam messages.

The malware sends messages in a format similar to this: “You have 1 new Voicemail, Visit [link].” It includes a bogus link that redirects viewers to a website that appears to be legitimate, and it tells them to read or listen to what they’ve missed. After that, it infects the device with malware.

The malware will prompt the user to allow the app authorization. When the person agrees, the program gets right to work and begins infecting numerous apps. Android users’ mobile banking apps get targeted by FluBot. It may, however, evolve and focus on cryptocurrency-related applications. These vulnerabilities can cause significant problems for businesses.

You can remove FluBot from your system by turning on Android’s safe boot option and manually uninstalling the malicious app from your OPPO device.

An easy method to hack text messages of any device is using remote monitoring apps. XNSPY is a remote monitoring app that gets installed on a target phone and remotely extracts SMS, calls logs, location data, instant messaging app conversations, and emails. It is the easiest solution to hack OPPO phones because the app does not require any technical knowledge to operate.

So if you’re wondering how to spy on SMS of any OPPO device, you can read the detailed guide on XNSPY’s website. Briefly stating, you need to download and install the XNSPY APK file on a target OPPO phone. You can spy on text messages remotely by logging into your dashboard account via a web browser once the app gets installed. Look for the “Phone Log” tab on the Dashboard and click it. Click “Text Messages” from the drop-down option to be directed to another screen with all of the text messages from the monitored device.

Pegasus is a major-level commercial spy app developed by an Israeli firm known as NSO Group. It gets sold to governments who want to spy on its citizens. This sophisticated spyware program can discreetly access your messages, record your phone calls, and turn on your camera. It essentially turns your phone into a surveillance gadget that operates 24 hours a day, seven days a week.

Hackers don’t even need physical access to your phone or persuade you to click on a link to breach your system. They only need to send a WhatsApp message to your phone, and Pegasus will have control of your phone. Pegasus gets installed even if you did not open the WhatsApp message. Fortunately, it is not available to citizens and gets sold only to powerful governments.

So these are five ways how OPPO and other Android devices can get hacked. They all have pros and cons, as some methods are unchallenging and cheaper than others. Some require technical knowledge, while others require a simple monthly payment. But you should be aware of all these methods to safeguard yourself.