Skip to content
XNSPY Official Blog > Android - New > Android vs iOS Security – Which One is Better at Keeping Your Data Secure? 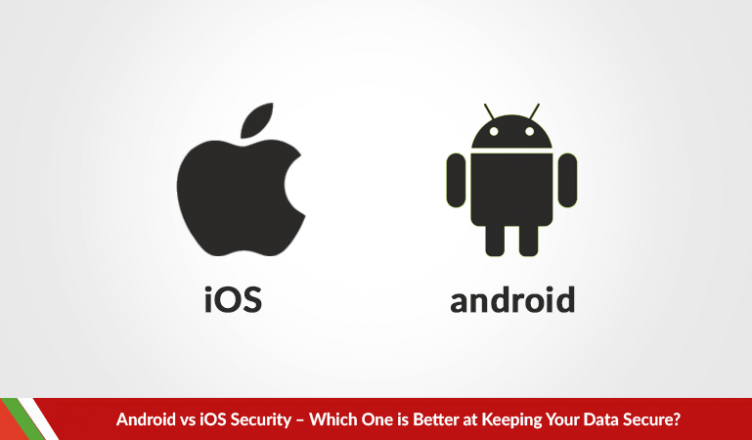 With each passing year, countless new phones are introduced. It’s hard to even keep track. And if you’re in the market to buy a new smartphone. You must be wondering which is better when it comes to keeping your data secure: an iOS-based device or an Android phone?

Let’s just say, you are not the only one who wants to know that. It’s the most basic question every smartphone user ponders over before switching to the latest model.

Historically iOS Is Known to be the Most Secure

Thanks to Apple’s strict privacy and security policies for all its preinstalled features and apps. Nothing goes by the iOS without its knowledge.

A few years back, the iPhone maker put up this huge ad, on a building right next to the Las Vegas Convention Center, saying: “What happens on your iPhone, stays on your iPhone”. The purpose of the multi-story billboard was nothing else but to mock its largest competitor (Android OS). Because Apple wants everyone to know that the company likes keeping things completely private and secure all across its family products.

Currently, iOS 14.x is powering all the iPhones and iPads available in the market.

When Android OS rose to the surface back in 2003, it was supposed to revamp the digital cameras’ operating systems. However, with a declining market for smarter cameras, Android looked towards bettering the mobile OS. And, we all know how that went.

Currently, the tech giant Google owns Android. It first launched Android 1.0 in November 2007, after acquiring the company in 2005. Since then, Android OS is evolving with each passing day.

Which OS is Safer?

When it comes to iOS, Apple has very strict rules in place. Firstly, iOS is what we call a closed system. So, the company does not release its code to app developers or iPhone owners. That means no one can alter the code themselves, making it difficult for hackers to find vulnerabilities.

On the other hand, Android OS is all about ease of access. It has an open-source code. So, it offers high adaptability and easy implementation for all new devices. But, this means hackers have complete access to its code, making it easier for them to manipulate (alter) the operating system for their own gains.

With the fierce competition between the two, Android vs iOS, they have both come to appreciate the things they lack. Apple’s operating system is getting better and better with its adaptability. While Google Android is constantly strengthening its OS security.

The Google Android OS is surely getting more secure with its every new release. The decider came in when Zerodium, a renowned OS exploits acquisition platform, started offering a maximum payout of USD 2.5 million for Android hacks in September 2020. While the maximum payout for iOS exploits was capped at USD 2 million.

This payout difference, for both mobile operating systems’ exploits, indicates that bypassing Android security is getting somewhat harder than it was in recent years.

Because, in 2019, Zerodium offered a USD 2 million reward for anyone who can jailbreak iOS without any interaction by the user. While performing the same feat on Android OS-powered phones would get one USD 500,000 only. The easier Zerodium thinks one can find an exploit the less the payout, and now it’s a very different game for the Google-owned phone operating system.

These exploits are also known as the 0-day (zero-day) vulnerabilities, present in either the software or hardware, which are not yet discovered at the time of a device’s release. They can be a great threat to a device’s security because they can be exploited to hack into the device. Enabling the hacker to steal your data, invade your privacy, or do whatever they desire with it. And, most probably it’s not something nice.

What Should You Expect in the Future?

Over the past years, cybercriminals have targeted and successfully attacked Apple devices. That means even its closed system is not impervious to hacks. And now, everyone knows that including the iPhone maker itself.

So, at the moment, both famed phone operating systems are competing for being the most secure mobile OS day in and day out.

Even though Android will always be more susceptible to threats being an open-source platform. While iOS might have many zero-day exploits hidden within its code because only several of them have come into the light just yet.

Yet one thing is for sure that Android is much more popular in comparison to iOS. It has more users being an integral part of many smartphone companies. And the number of Android users will only keep on increasing. On the flip side, iOS is merely being used for Apple products such as iPhones and iPads, etc. That’s a limited amount of people in a limited amount of countries.

Final Take on iOS vs Android

Mobile technology is improving exponentially. So, who knows what new smartphone operating system we will be talking about in the next ten or even five years.

But for now, let’s just take it as it is. In the fight between iOS and Android, there is no clear winner.

It’s your choice in the end.