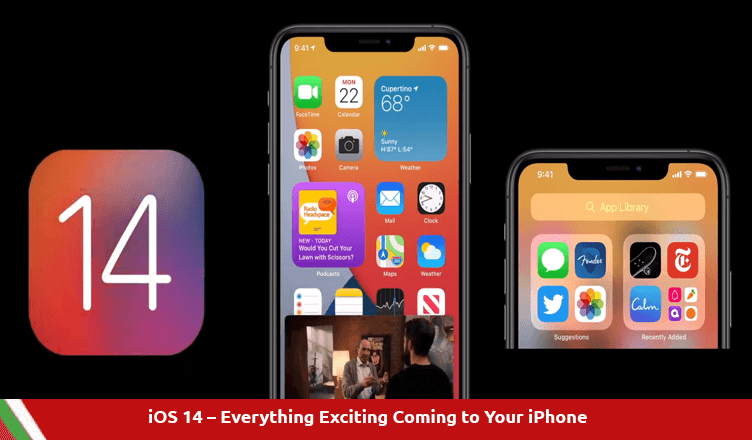 The new iOS 14 update promises to bring the biggest improvements on your iPhone. Well, that’s what Apple tells you for every new iPhone and iOS update. And while it’s usually true for their hardware, the iOS has only been giving us incremental enhancements; many of which Android users have been enjoying for years now. If you can’t wait to have the new iOS 14 on your phone, you can install the iOS 14 public beta version on your iPhone (see below).

It’s too early to say that if this is the complete makeover to Apple’s operating system for iPhone. The look of the iOS will be familiar but we will be able to see some of the noteworthy changes and some refinements as well.

The fully-functional iOS 14 will not be available until fall. But all thanks to the Worldwide Developer Conference, it has given us a good idea about all the upcoming features to our way. Note that the iOS 14 beta version for the public is available for people to test out the features on their iPhone. This acts as the best opportunity for those who are interested to have an early sneak peek of all the upcoming features.

Currently, there is no official announcement about the release of iOS 14. Apple likes to hide the information from the audience before the official event. But, if we look at previous release dates of iOS 14, we can expect to see the final version on our iPhone this fall. This will be the exact date when Apple unveils its new 2020 iPhone models.

Usually, the launch of the iPhone happens in mid of September but this time, the launch might get delayed due to COVID-19. According to some analysts, the mobile phones might launch in November, so this will be the time when the final iOS 14 will roll out as well.

Installing iOS 14 Beta Version – How To Do It?

Would you like to test out iOS 14 (beta public version) before the official release? For this, you have to enroll yourself in Apple’s beta program to get your hands-on public beta. After this, you will be able to download the iOS 14 public beta on your iPhone. Click on the Settings app> General> click on the Software Update> for installing the beta version.

Friendly Reminder: It is important to note that Apple’s public betas are usually stable. But some bugs might thwart the functioning of your apps that you are using daily on your iPhone. The idea of installing the public beta will be good if you have any spare iPhone which you are not using for your daily needs.

The next question in your mind will be the compatibility of iOS 14 with different iPhone models. Below is the list of all the compatible devices:

All the Features of iOS 14

The new look of iOS 14 will be a noticeable change. It is not only about the new features! Let’s have a deeper look at the iOS 14 features:

Revamped Home Screen & Organized Widgets Without any doubt, iOS 14 is bringing the revolutionary changes for your iPhone’s home screen. The newly designed “App Library” will be Apple’s effort to provide a similar feature just like the Android app drawer. You will be able to resize the widgets and can lift them out from their respective page to the normal pages with other apps on your home screen.

The next amazing thing you will be able to see is the Smart Stack. This is going to be interesting because this is a widget designed for specific apps present on your iPhone. It will be dependent on the contextual clues or on the different timings of the day. For instance, in the morning, the Smart Stack will show you the weather. After some hours, it might show you the calendar. Most importantly, the user can add different apps in the Smart Stack and can manually scroll through it. Isn’t this cool!

The next important thing to note down is the App clips. These are the small and downloadable snippets. This will allow the user to handle some specific tasks. For instance, ordering food or making payment for parking. This will work with already available Sign In with Apple features. This feature will not allow you to create separate login information. The user can easily make the payment using Apple Pay. Now, developers will have to make the changes in their apps to get the benefits from this feature.

Messages have been the same for a long time but now it’s time for a change. The user will get a new Memojis. It is surprising to note that you will see an accessory related to face mask as well. The user can now pin their frequently talked contacts. Furthermore, if you were not a big fan of the previous group conversation interface, then you are going to love the new interface. Now, the user can easily give an answer to a particular message. More importantly, you can also switch off all the notifications when talking in a specific iMessage group. You will be notified only when a particular person will specifically text you.

Apple seems to be very consistent when it comes to the changes Siri. iOS 14 is going to make it even better. This time, Apple is choosing a packed design for the voice assistant Siri. Now, users don’t have to pull out a separate screen of Siri, they can simply give a command to the assistant and the app will be launched on your iPhone. This is definitely going to make things easy for users. The “on-mobile dictation” is a user-friendly feature that will help you to keep your words on the device. Moving on, a newly designed translation app is also coming in the iOS 14 version. With this, the user will be able to see the entire translation on the iPhone’s screen. If you will turn your iPhone to landscape, you will be able to see a split-screen representing the translation. At the launch, Siri will be supporting a total of 11 languages. The list includes Japanese, Italian, German, Arabic, French, Korean, Spanish, Portuguese, Mandarin Chinese, English, and Russian languages.

You might think that Apple should have introduced this feature in the previousiOS versions like 12 or may at least in 13. Finally, Apple is bringing this feature to the iPhone with iOS 14. Now, you can resize your video. You can drag them out or tuck them back as per your choice on the screen. This feature is very handy because you can do your task without any distraction due to the big screen of mobile nowadays.

There are some pretty interesting changes in this area. Apple is introducing new Guides. With this, the user will get recommendations for the place to enjoy food and the best places to explore the selected cities. The users will also get the directions specifically for cycling regarding the bike lanes while traveling. Lastly, if you are driving an electric car, the maps will offer you a feature called EV routing. With this, you will be able to know about the available charging and it will also help you to locate the nearest charging station available on your route.

Want to get rid of carrying the physical keys of your car with you? iOS 14 is within the Wallet app on your iPhone is going to provide you an alternative for this problem. Note that your car keys will be using the NFC, the user with just a single tap can unlock their vehicle. Furthermore, a user will have to place an iPhone on the vehicle’s charging pad on the interior side to start the car by pressing the ignition button in some car models. According to Apple, this feature is secure as compared to the physical keys. Furthermore, the user can share their keys with another iPhone user securely. More importantly, CarPlay is also bringing newly designed wallpapers.

Some other great features that we will see are as follow:

Privacy Features: Better privacy features, users will have more control and transparency. Security Features: Improved security in all the features present in Safari.

Better Connectivity for HomeKit and Home app: You will definitely like this! Remember that all the doorbells and video camera working with the HomeKit can identify all the people tagged in the Photos app of iOS 14.

Improved Health Feature: iOS 14 will enable a user to set your goals for sleeping, will provide you the options to set the perfect sleeping patterns, recommendations on bedtime, and much more.

Time To Change Default Apps: Want to use third-party apps on your iPhone as your default apps? Yes, you can do it now with the iOS 14.

Enhancements in Camera: Camera app will be adding exposure control for controlling the exposure and locking the camera focus on certain shots.

Better Accessibility with Back Tap: You can set various shortcuts or can assign different tasks with the help of a double-tap or triple-tap feature.

Easy Call Alerts: This is really exciting, now your incoming calls will not occupy all your screen. Instead, it will be displayed in the form of an alert on the top of your screen.

Photos App Caption: Finally, the iPhone users can add a caption to photos.

This was all about the upcomingiOS 14. This is really amazing that iPhone users are going to get some pretty good features. This year, the OS will definitely change the look of your iPhone. You have to wait till the fall to get the fully functional version of iOS 14. However, if you can’t wait, you are free to download the public beta version but keep the risks in mind.