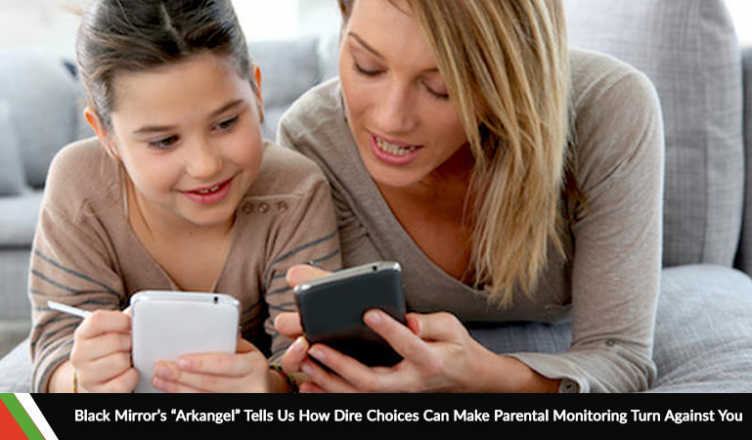 It was the usual Wednesday morning where my kids were at their school and my husband at his office and as I got done with all my chores early that day, I decided to stream Black Mirror on Netflix. Anyway, this one particular episode of Black mirror called “Arkangel” had me question a lot about myself as a mother.

The episode revolves around the story of a mother (Marie) who puts her daughter (Sara) up for an experimental surveillance program called Arkangel. Through the program, Marie could monitor Sara’s overall physical health, emotional or mental distress caused by an external stimulus, and hear and watch whatever she is watching and listening. Marie could also filter out things that may cause mental or emotional distress to Sara on the tablet she was given after a circuitry was injecting into Sara’s head. I would suggest you watch this episode to really understand what happens especially if you are using parental monitoring software programs such as XNSPY.

Marie is basically concerned about her daughter’s safety, like most of us are. When it comes to our kids we make sure we leave no stone unturned because what are mothers for if they are not obsessing over the well-being of their child’s existence. So, she figured that through the program she can be in control at all times especially when she has to be at work. The idea at the beginning of the episode made me excited and imagined how easy it would be for me to take care of all the things I worry about. But as the episode progresses, we come across Sara acting out of confusion. Her mother had filtered out all the filthy stuff from her vision. She could not see 18+ content and violence; basically, anything that caused her emotional distress would be blurred out. As she grew up with her filter on she grew frustrated as most things around her were not visible to her. Even when a friend of her tried showing her a violent and pornographic content she could not see any of it. Such curiosity and confusion led her to inflict physical harm upon herself. That is when Marie, her mother, realized she needs to get rid of her monitoring device and let Sara experience the world as it is.

Sara then turns 15 in the show and even though the actress who played her character looked 25, starts partying with her friends and lies about going to a beach party with her guy friends, and FYI, that is normal teenage behavior. Do not tell me you didn’t lie to your parents in your times. Anyway, when Marie tried to reach out to her daughter, she could not get her in contact. She called Sara’s friend and found out that her daughter lied about going to an all-girls movie night at a friend’s house. Scared for her daughter’s safety, Marie takes out the monitoring tablet from the storeroom. She turns it on and finds out that Sara is safe but she also accessed Sara’s vision and there she is, engaged in some not-so-appropriate actions with a guy she has no idea about. I mean what are the odds! Imagine you’re in Marie’s place and see your child get some while you’re freaking out. How disturbing! Anyway, her daughter finally comes back home and goes straight to her room. From that point on, Marie decides to keep that monitoring tablet on because she felt like her daughter was not being honest and that she might put herself in danger.

Through the device, Marie finds out that the guy her daughter is dating is actually a bad influence on her because he was a drug dealer. He was not an addict and he never offered Sara to take drugs. Despite that who would want their daughter to date a drug dealer? Anyway, Sara wanted to try drugs and she forced the guy to let her try some and after much convincing, he gave in. Her mother thought that guy was forcing her into all of those things and decided to reach out to him and threaten him to leave Sara alone or else she would report him to the police as she had all the proof in the tablet regarding his drug dealing. Marie did not think about talking to her daughter for once. She straight up decided to take care of things on her own. She failed to realize that her daughter was growing up and she should be able to talk to her directly. Anyway, when her boyfriend started ignoring her, Sara became frustrated. She tried to talk to him but he told her that he wants nothing to do with her. It broke Sara’s heart. Through all that emotional upheaval, Marie does nothing to provide Sara with emotional support and thought she was doing the right thing.

By the end of the episode, we come to know that Sara was pregnant and her mother added pregnancy termination pills into her daily smoothie. She also figures out that her mother had switched on her monitoring device and found out all those videos of her with her boyfriend doing all sorts of thing one would never want their parents to know. When her mother returned back home she confronted her. Her mother tried explaining it to her but Sara felt like her own mother betrayed her. She blamed Marie for everything that happened to her. She could not comprehend whether that person monitoring her was her mother or her enemy, and without coming back into her senses she started hitting her mother with the tablet. The tablet starts to malfunction and the filters come back on and Sara can no longer see that she was hitting her mother so hard that her face was covered in blood. At this point, I thought she was dead. As the device completely shuts off, the filter is left on, she cannot see what she did to her mother as the filter blurs out blood as well and for some God forsaken reason she picks up her stuff and runs away. Marie rises from the ashes and tries to follow her but Sara is gone, vanished into thin air.

As we have gone through the plot, we see how technology in the future has the potential to screw us all. But as we take a deeper plunge into it, we should be able to notice that the Arkangel technology was not the issue, it was the mere selection of choices that Marie made. Every technology has its pros and cons; it depends on us how we are going to use it. So, if Marie had set some boundaries for herself while monitoring her daughter, Sara wouldn’t have turned into a total psychopath.

In my opinion, Marie failed at parenting. She thought she could be a better parent with the help of technology but she only made things worse for herself in the long run. If she had wisely used the program it could have been successful but honestly, mothers cannot rationalize quickly when it comes to their kids. I might have made the same stupid choices as her if I had my chance but since I am not, I’ll enjoy the liberty of criticizing her parental monitoring.

As parents, we all can agree that we do not know what we are doing but we try our best. We all have our own ways of monitoring our kids but in this digital age, we can also find ourselves in Marie’s place. She was only concerned about her daughter’s safety as she knew nothing about her whereabouts which led her to switch the tablet back on. If she had just checked Sara’s vitals and her location, she should have left her alone and spoken to her directly when she gets back. Instead, she went too far ahead. So much so that she had found out about her pregnancy before she could even know and terminated it without her knowledge. I know she wanted to protect her girl but there are some ethical boundaries. You cannot always protect your kids. You will have to teach them how to deal with problems in life and help them understand the difference between right and wrong rather than filtering-out the harsh realities of life; otherwise, such parental monitoring can turn against you just as it did in Marie’s case.