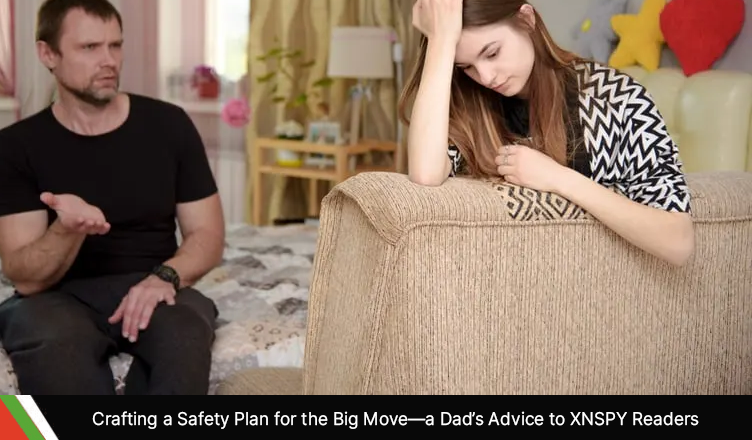 Here is an XNSPY dad’s story about how XNSPY helped him move from one state to another along with his entire family. Leaving your old home behind can be difficult, but orchestrating the move itself? We’ll let the dad tell you his experience in his own words… I’m going to start off by saying that my story isn’t going to be sensational or pull at heartstrings like some of the other parent’s stories I have seen on here. Actually, scratch that. Because it is not a story at all. It is basically just a piece of advice to folks that read this thing about something really cool that I did. I think it was my proudest dad moment; because in that moment, I took control of a big move that had been spiking my blood pressure. And I did it with an app. Me. Using an app. Just like the cool kids these days. So consider this my memoir of how I managed to move my entire family from one state to another without anyone experience a single meltdown. Not even one. My XNSPY parental control was basically by Yoda, telling me to use the Force.

Okay, let me rewind and give you a little context here. I live in Minnesota, I have lived here for most of my life. My kids grew up here, all their friends are here, Minnesota is basically their life. So when I announced that I’ve got myself a rad job in Arizona, like any other teenagers finding out that they will have to leave all their friends behind—they were stoked! I was about to be Dad of the Year! My kids practically cried tears of joy. In hindsight, they might have been tantrums, but I mean, Dads tend to have a warped sense of reality.  But anyway, the kids were also pretty worried about moving all their stuff from one state to another. We spent weeks talking to movers everywhere and there were more tantrums. What got me all worked up was the fact that everything was so disorganized. So I thought, okay, enough of this, I’m going to get me an app.

On I went and sat the family together and told them, “Hey, if we’re going to make the move, we’re going to have to be on the same page.” Then I rallied them up and did a fantastic pep talk as well (I have a transcript in case anyone wants to use them on their kids) and then I installed XNSPY on the entire family’s phone. My three kids, my wife and I all had XNSPY parental control on their phones. This may sound like an odd solution to your guys, but get this. Our move was a 2-car process and we were supposed to move shifts in between. We had the moving van which contained all of our stuff and we had the sedan which contained all of our kids. Then there was another bigger van from the moving company that had to corporate with us. So what did XNSPY do? Before we even began the journey, we had marked our routes. All designated drivers were supposed to stay on it. If anyone deviated, the app gave us an alert and we got those twerps in order. All of the vehicles were pretty coordinated. My daughter was most worried about the mover running away with all her things so I suppose checking the map every 10 minutes gave her something to do along the way. Finally, the app helped me and my wife know how my kids were really feeling about the move. I may be out of touch and my Dad-ness may be taking its full form, but I know how hard moving is for kids. The app helped us know what they are talking about with their friends and what is on their minds so we could help them cope with stuff. I think I did a pretty swell job at that. Do you have a story you want to share? Leave a comment below or message us!