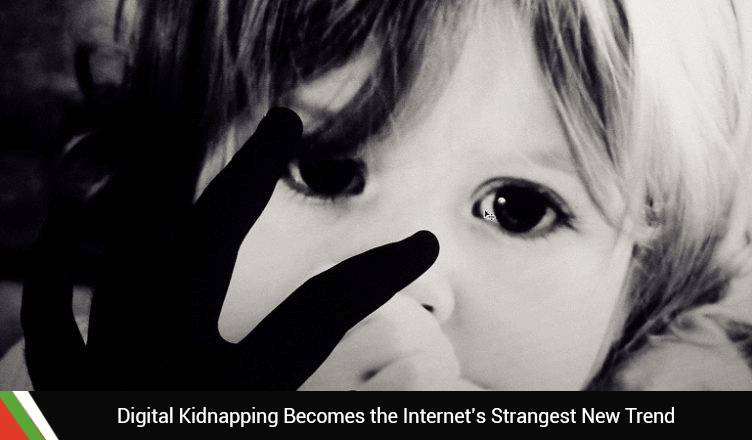 There are a lot of odd things on the internet. The 10 hour Nyan Cat video with nearly 40 million views comes to mind, or the fact that there is a dating website specifically for Gluten Free people. But here’s one which is a whole new level of strange, mostly because at first glance, you wouldn’t know how to feel about it. And this trend is digital kidnapping. And no, it is not as simple a concept as you’re thinking it is.

What is Digital Kidnapping?

So what exactly happens in digital kidnapping?

Someone—a complete stranger—obtains the photos of someone else’s child. The child usually being an infant or a toddler. They repost these picture onto a separate Facebook, Instagram or other social sharing platforms, and claim that the baby is their own. They usually post these picture with very specific fictional details; an imagined name, height, weight, likes and dislikes. Sometimes, they steal pictures of adults, too in order to create a fictional family.

It’s probably a lot more complicated practice for it to be called ‘digital kidnapping’. Because it is a bit like playing house, isn’t it? Except the strangers are using actual photos of someone else’s babies without their knowledge. By the way, did I mention that people that run these Baby Roleplay blogs are usually teenage girls?

Let’s dig a little deeper and find out how these blogs work.

Apparently, if you search the hashtag #BabyRP on Instagram or Facebook, you’ll find thousands of blogs dedicated to this ‘community’. Some role play as adoption agencies, others as actual parents or families. It seems that people that run these blogs are essentially acting out a fantasy—at least in the digital sense.

Here’s an example from Crime Feed:

In this scenario, the role player pretends not to be the mother’s child, but the toddler herself. In the same way, many post pictures of what they want their dream house to look like or what kind of mother they want to be to the child. Except that they use stolen photos, which makes this situation a little more problematic.

Digital make-believe is not uncommon. It is perhaps what makes Pinterest so popular. You can aspire to the life you wish you should have and find an escape in your fantasies. Internet roleplaying is not uncommon either. It’s simply the fact that in this BabyRP occurrence, the pictures being used in this make-believe are of actual children of actual parents. Which makes it… well, frankly a bit creepy.

Who is Behind Digital Kidnapping?

You’d be inclined to think that people behind these blogs are pedophiles or actual kidnappers. But nope, like I said before these bloggers are usually teenage girls. Mother Lindsay Paris found that someone was using her son’s photo as their homepage cover. Not only that, they were also telling the followers that she was the mother. So when Paris messaged the blogger and demanded that the photos be taken down, she found she was talking to a 16-year-old in California. She apologized saying she didn’t mean to hurt anyone, but always wanted a red-headed baby.

What’s more unsettling is that these baby role plays cannot technically be considered a crime. Before photo sharing does not violate the terms and conditions of many social media platforms. And then there’s the argument that it is largely harmless—it’s the photos being stolen, not the actual children. But if it does leave parents uncomfortable and with fear for their child’s security, I’d say their feelings are quite valid.

What Needs to be Done?

First, let me talk to parents of infants/toddlers.

Of course everyone wants to document their babies growing up, but putting them on the internet for everyone to see might not be the best idea. I’d suggest you

And now, let me talk to parents of teenagers.

Like we’ve said many times before you need to watch over your child’s activities on the internet. In the past we’ve talking about you making sure they don’t have comprising photos of other teenagers. Now, considering it is mostly teenagers that are behind this, you’ve got to make sure they don’t have photos of… other people’s babies.

While people are still debating whether this phenomenon is harmful or harmless, it is entirely your responsibility to make sure your kids are not stealing photos. More importantly, make sure that these photos aren’t being used in a way that can be unsettling or disturbing to someone else.