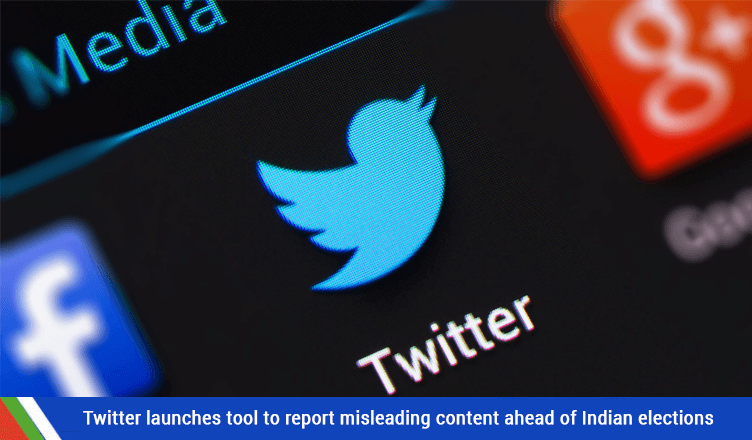 With Twitter’s latest enhancements, users could now report tweets they believe are trying to misinform voters. This new reporting feature, tossed this week in India, will be launched in Europe on April 29, 2019. With many subsequent countries expected to get this feature very soon, Twitter’s big-picture plan is to have it available globally.

Twitter mentioned in one of their official blog post that, “Voting is a fundamental human right and the public conversation occurring on Twitter is never more important than during elections. Any attempts to undermine the process of registering to vote or engaging in the electoral process is contrary to our company’s core values.

We are further expanding our enforcement capabilities in this area by creating a dedicated reporting feature within the product to allow users to more easily report this content to us. This is in addition to our existing proactive approach to tackling malicious automation and other forms of platform manipulation on the service.”

The tool will enable users to report tweets containing any misleading information. These can include:

¬    Misleading information about how to vote or register to vote

¬    Fake claims about identity requirements for being able to vote

You can report any suspicious tweet by following these steps:

Step 4: Select the option that best tells how the Tweet is misleading about voting

“Our teams have been trained and we recently enhanced our appeals process in the event that we make the wrong call,” the company added.

According to new research by Social Media Matters and Institute for Governance, Policies, and Politics (IGPP), nearly half of the voters have received some kind of fake news in the month leading up to Lok Sabha polls. It is the latest and most significant move by social media platforms, pulling off a crackdown on misleading information and fake news. India’s national election, seeing 900 million people eligible to vote, is the largest election in the world. Facebook, Google, and Twitter have been working hard to warrant that no country or individual will be able to impact political campaigning in Asian countries.

Last month Facebook introduced a set of tools, specifically for Indian users, in a bid to boost engagement with the voters ahead of Lok Sabha elections. These tools included “Candidate Connect” and “Share You Voted.” Candidate Connect enables people to watch a short 20 seconds video uploaded by candidates. People can easily cross compare candidates who have shared their opinion on the same pre-selected topic in 12 Indian languages. With “Share You Voted” feature, people can share with their Facebook friends that they have cast their ballot in the elections. The social media giant has also removed 687 pages and accounts that were involved in synchronized fake behavior in India ahead of the elections.

In recent months, the European Commission has been pressurizing tech platforms including Facebook, Twitter, and Google to scrub disinformation ahead of the EU parliament elections. It had been issuing monthly reports on progress, or, even the lack of it.

In the case of Twitter, the company had been lauded for having made political ad libraries publicly accessible. But, it has been scrutinized for not doing more to improve transparency. “It is regrettable that Google and Twitter have not yet reported further progress regarding transparency of issue-based advertising, meaning issues that are sources of important debate during elections,” the Commission said.

“Twitter did not report on any actions to improve the scrutiny of ad placements or provide any metrics with respect to its commitments in this area,” it also added.

After facing a lot of criticism, finally, Twitter has taken a significant action by launching their “report” feature. Keep yourself updated during this Lok Sabha polls, and report immediately if you encounter any fake or misinformed news.