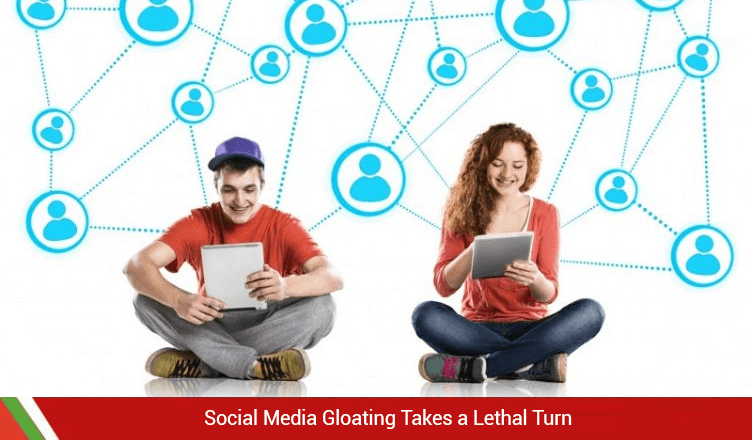 There’s this story that has been floating about the internet recently that I felt compelled to write about today because this is one occurrence of social media gloating that no one could have foreseen.

A 16-year-old boy Snapchats a selfie next to a victim’s body. The “victim”, mind you, happened to be his classmate—and in the picture, he had a gunshot wound on his face. A friend saves a screenshot of the selfie, which ultimately finds its way to the police. And what are the police to make out from a picture seemingly of a teen posing triumphantly next to his kill? Exactly that—that the victim definitely is the boy’s kill. The 16-year-old confesses after a gun is found in his possession and is now faces murder charges as an adult.

A single selfie with content so terrible, yet shared so smugly all across the social media platform. It’s almost impossible to believe that a boy of 16 is behind this.

The Need to Gloat on Social Media

This particular instance is probably the furthest extreme that social media gloating could go. But truly, for more examples of social media narcissism, you don’t need to go much further than Rich Kids of Instagram, or the ample occurrences of Facebook PDA littering your wall.

To be completely fair, egotism in peer groups is perhaps as old as time, but when it has a platform as dynamic as social media, it tends to travel faster. It reaches a bigger audience. And it makes kids do things to outdo each other in an attempt to get noticed (we’re not forgetting the selfie Olympics trend anytime soon). More likes, more reblogs, more retweets; that’s what it all boils down to.

A Lesson in Moderation

The issue with talking about social media gloating like this is that it is such a non-problem. Because there is nothing apparently misguided about wanting to show off in front of your peer group. And I don’t particularly care for people that write off new technology as the work of the devil that is ‘spoiling kids of today’.

However, I felt the need to discuss social media narcissism because this news story made me see how far teenagers can take it. I’m quite aware that this is an isolated case. But I also want you—the parents, the authority figures looking after minors—to know that oversharing and gloating on the internet carries the potential to be disastrous. Your child can go to any lengths to get noticed. They can put themselves in danger, they can put others in danger. And for what? For more likes or shares or whichever.

This is why you need to step in. You need to keep an eye on everything that your child shares on the internet—statuses, texts, selfies and all. Keep track of the nature of their social media sharing habits. Find a way to keep them grounded in reality. That’s the only way they will realize that putting themselves at risk, just so they can impress people on the internet, may not be all the worth it.