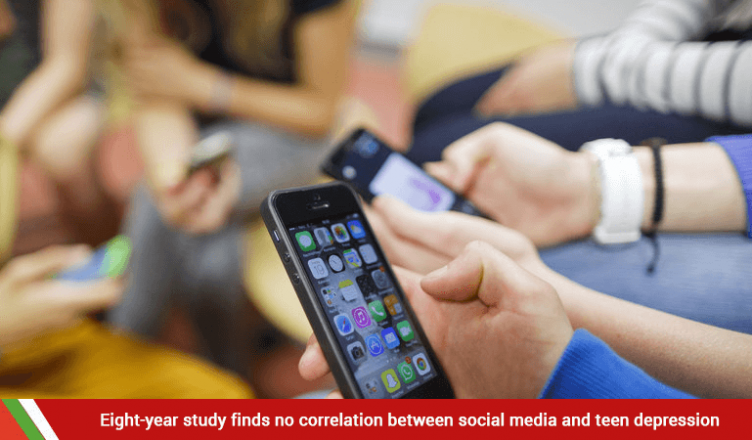 Since 2012, the number of hours teenagers spend scrolling through their Facebook and Instagram feed, has risen to 62.5%, which is expected to grow. Last year, the average time teens spent on social media was calculated, as 2.6 hours per day, and critics claim that increased levels of depression and anxiety in teenagers are linked to excessive screen time.

As youngsters spend a lot of time living in the digital realm, the parents are concerned about social media addiction and its impact on teenagers’ mental health. But, is it a matter of concern? Are screens leading to mental health problems?

Sarah Coyne, a professor of family life at Brigham Young University, led a research finding that there is no direct link between social media and the increasing rate of anxiety and depression in teenagers. The study was published in Computers in Human Behavior. Coyne revealed that the research took eight years in which the team tried to figure out the relationship between the time spent on social media and depression in teenagers.

Mental health happens to be a multi-process syndrome, and there is no one single reason that causes anxiety or depression. According to this study, it is not only the amount of time that you spend on social media platforms that causes an increase in anxiety and depression among adolescents. Technology, in some of the cases, has helped in lessening depressive or worrying feelings along with symptoms of depression among the participants.

There is no way tweens or teens are going to stop using social media anytime soon, and the new study reveals that maybe they don’t have to. Coyne says that the amount of time is not the only thing that is important for most kids. For instance, take two teenagers who use social media for the same amount of time but could have entirely different outcomes due to the way they use social media.

The study aims to take society farther from the debate of screen time and take a look at the content and context that surrounds social media use. Coyne has presented three suggestions for healthy use of social media:

Put away your phone at least an hour before sleeping. One of the most protective factors of mental health is getting enough sleep.

Adopt an intentional approach. What is your intent for using social media? Find that.

Coyne says that if you go to social media particularly to find out information or to connect with others, it could have a more positive effect rather than using social media only out of boredom.

Another study took place to understand the mental health of teenagers and social media usage. 500 youngsters between the ages of 13 and 20 took part in this study and completed once-yearly questionnaires over a period of eight years. The participants revealed how much time they spent on social media on a regular day and social media use was calculated this way.

The participants responded to questions for measuring anxiety and depression with a variety of scales so that anxiety levels and depressive symptoms could be identified. The findings were then analyzed individually to spot a strong correlation between the two variables. Teenagers of 13 years of age reported using social networks on average of 31 to 60 minutes per day. As they grow up, these average levels increase steadily to two hours per day. This jump in social network use, by no means, predicts the future mental health. The increase in using social networking further than their regular use did not predict changes in depression or anxiety after a year.

Michaeline Jensen, a psychologist at the University of North Carolina at Greensboro said: “Contrary to the common belief that smartphones and social media are damaging adolescents’ mental health, we don’t see much support for the idea that time spent on phones and online is associated with increased risk for mental health problems,”

Jensen and her colleagues surveyed more than 2,000 students between the ages of 9 and 15 years old for the research in a diverse public school in North Carolina. The students were interrogated three times a day regarding their mental health symptoms. At the end of the day, they reported their daily use of technology.

After a year, a sub-sample of about 400 participants let the researchers monitor their smartphone use extensively multiple times a day for two weeks. The authors concluded, “In our longitudinal study of adolescents followed intensively overtime on their mobile devices, we found little evidence to support a linkage, correlational or causal, between adolescents’ digital technology usage and mental-health symptoms,”

They also unraveled some benefits of smartphone use. Young people who texted more showed lower levels of depression. They suggest that we also saw adolescents who spend most of their time on technology creating their content enjoying better mental health,”

These days, socializing with people is a kid’s favorite past time. They would rather stay home and chat with friends rather than going out. Banning social media could isolate them from their peers. At the same time, the aimless activity of scrolling down the newsfeed or watching videos is something that should have a limit, especially if the kid is ignoring schoolwork.

Authors suggest that studies, from now onwards, are going to focus more on finding ways to educate and support young people of Gen X and less on-screen time itself. Another psychologist, Candice Odgers from the University of California, Irvine says, “It may be time for adults to stop arguing over whether smartphones and social media are good or bad for teens’ mental health and start figuring out ways to best support them in both their offline and online lives,”  Though some of the past studies revealed correlations between social media use and subjective well-being, several other longitudinal studies have demonstrated no connection whatsoever, or associations too small to hold any meaning.