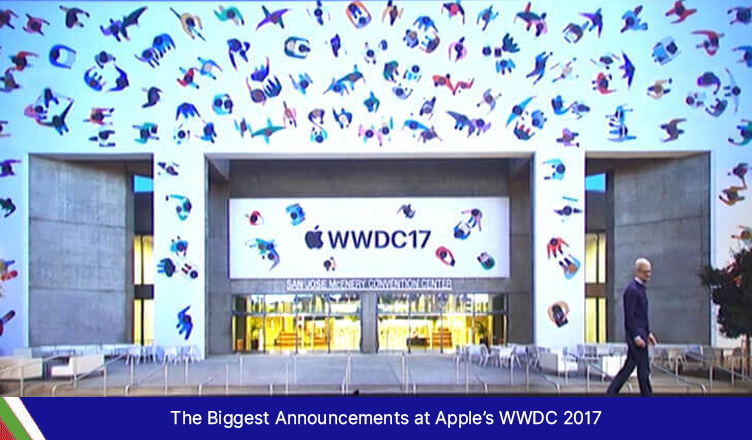 Apple went above and beyond in the 2017 WWDC with surprises that blew everyone away; even their most die-hard of fans could not have predicted what they had in store. Apple’s keynotes have always been entertaining to say the least but this year was exceptional

Here are the top products Apple revealed in their keynote:

The long awaited installment to the iMac pro is finally here! And with what a bang it has arrived too. The bleeding edge tech inside the iMac Pro Apple has decided upon will have even the most die-hard PC fans praising what they have brought to the table.

The specs are as follows:

These specs can rival and even beat the highest end of PCs. With a yet to be announced AMD Radeon GPU and a pretty hefty CPU to boot the iMac Pro can run any modern games without a hiccup. Though complaints seem to have risen about the price with many claiming it to be over-priced. How it performs with respect to how much it costs remains to be seen.

Another surprise announcement, Apple went ahead and release the iPad Pro with an all-new 10.5 inch model with 10 hours of battery life and USB type C. The new 12-megapixel back camera takes dazzling pictures and it is pretty surprising just how good the result. Apple has really upped the ante with the camera in the iPad Pro, same goes for the 7-megapixel front camera that produces the same wonderful results.

The iPad Pro also has new functionalities for the Apple pencil namely the ProMotion with which the latency between the screen and Apple Pencil is reduced to a mere 20 milliseconds. Apple also

Speaking of the screen, the new and heavily improved Retina display is a whole lot brighter and a whole lot more vivid. They seem to have finally figured out the perfect balance between non-reflective and just the right amount of bright for their new display.

Now available to order the iPad Pro starts with a 64GB model with a $649 price tag.

Apple brings out the HomePod set to rival the Google Home and the Amazon Echo just as rumors predicted but its functionality does not end where it does for its competitors- no Apple went above what consumers would normally expect from such a device and made it so much more complex that it’s amazing.

With a built in Siri and a special awareness the HomePod detects and plays music and/or sounds to better fit the environment it is in. Paired with Apple Music it can also play personal playlists. Siri can also be asked complex questions by the user- more music related than anything else and Siri will answer.

The HomePod it seems will be a great device for personal use and can even liven up small restaurants and coffee shops. Apple has it seems surpassed its competitors with one swift stroke- on paper at least. It remains to be seen how the HomePod actually compares to its competiton.

Available in two colors: White and Black, the HomePod starts at a price of $349 and will be available in December for shipping.

The new update to the iOS focuses on creating a more open and social environment for the Apple user. Siri has not vastly improved speech and greater functionality. It can now help you to translate entire sentences into other languages and works now to in tandem with how and what you use your phone for. Meaning that Siri picks up on what you browse through, who you call most, text most etc and bings you options according to that data.

iMessages has been revamped with how it stores messages. Instead of saving texts to local memory, it now saves to the iCloud meaning you can manage texts from a device that is logged in to your Apple ID.

The new Do Not Disturb feature is a great step in the direction of safety. iOS 11 on devices now can detect whether a user is driving and accordingly turns on the Do Not Disturb mode which blocks calls and texts so that the driver is not distracted and can have a safe journey.

The App Store and Apple Music have also been redesigned with being social in mind. Apple Music allows users to view what songs or playlists their friends are listening to and even go ahead and share those songs and playlists as well.

The App Store brings back one of its most celebrated features: The App of the Day. This is to help bring in users to the App Store every day and that is coupled with a new How To section that explains how to use most common apps. Apple has also made it easier to find new apps with better discovery features

iOS 11 heavily improves low light photography in the camera. It also now introduces the capability to better manage and edit Live Photos so you can have the most picture perfect moment you could hope for.

The User Interface has been re-worked too, mainly in the control center. It now is less all over the place and relies more on the 3D Touch functionality. Same goes for the iPad with iOS 11 coming to it too. The iPad now introduces multitasking –as you would on a regular desktop but with a few iPad specific features. You can drag and drop pictures, files and the like from one app to the other, resize windows, use the Apple Pencil to search files and using the all new file management system you can sort through those files as well. The Apple Pencil will learn the user’s handwriting, Apple claims and eventually be better at recognizing it.