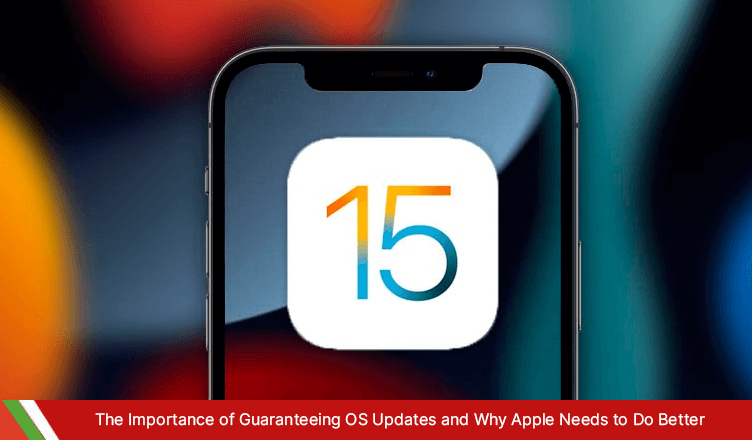 Longevity has long been a benefit for iPhone and iPad users over their Android peers. While new Apple devices receive OS upgrades for years, most Android phones are lucky to receive updates for more than a year after purchase, leaving many smartphones with out-of-date software before they’re ready to be upgraded.

Samsung has significantly narrowed that gap with the latest Galaxy S22 phones. In addition to the new phones, the company said that they will support four generations of One UI and Android OS upgrades, as well as five years of security updates. That means that an S22 purchased today with OneUI 4 based on Android 12 will receive OneUI 8 based on Android 16 in 2026.

The Importance of Guaranteeing OS Updates

Of course, Apple normally supports its devices for much longer. More than six years after its release, the iPhone 6s from 2015 may now receive iOS 15, and the iPad Air 2, released in 2014, is also compatible. Buyers, however, are unaware of this at the time of purchase. We simply have to trust that Apple will not discontinue support after three or four years.

And it is not always the case that people live for a long time. Apple discontinued support for the Apple Watch Series 1 and 2 with the release of watchOS 7 in 2020, less than four years after the hardware’s release. We assume the iPhone 14 will receive iOS 20, however, Apple has never confirmed this.

It’s improbable that any Android smartphone will ever support OS upgrades for as long as an iOS device, but that’s irrelevant if Samsung provides a promise that Apple does not. Apple customers anticipate their new iPhones to receive at least 5 years of updates, if not more, and Apple should capitalize on its advantages by meeting and exceeding Samsung’s guarantee.

When you buy a new Apple product, you can rest assured that it will receive OS updates for many years to come. It’s possible that Apple will have to put it in writing.

Although it is not stated in Apple’s terms and conditions, there is always the possibility that Apple will discontinue updating its devices without providing legal notice. Unlike other phone manufacturers, Apple talks about increased security and longevity; yet, nothing in the tiny print guarantees security updates, which can be challenged if they fail to deliver.

Why does Apple need to do its OS Better?

Apple devices are, indeed, costly. However, most phone manufacturers, including Samsung, will be able to say the same in 2022. It is also true that devices might become obsolete in 5 years. The statement that Android is quite well developed and that a smartphone will still work fine after 5 years without major updates is also correct. However, there are a couple of reasons why we feel the need for a better OS:

Reasons Why Apple Enables its Devices Update for Long

This isn’t the main reason, but it is a key feature that allows Apple to keep its gadgets updated for a long time. Apple is responsible for the processor, operating system, and hardware of its phones. This implies the company can customize everything to work smoothly over time and with upgrades. From the chips to the displays to the batteries, Apple is well aware of the limitations and strengths of its devices. They also know how to fine-tune the devices over time to provide optimal performance. They also stated that following the incident, they deliberately slowed down older iPhones to alleviate the burden on the Lithium-ion batteries and make them last longer.

Samsung, on the other hand, manufactures both the chips and the rest of the hardware for some of their devices, as well as customizing the software with One UI. However, they do not have complete control over the operating system. They also produce so many devices that they can’t possibly keep up with all of them and ensure that they all work properly.

This is the primary reason Apple will continue to update the iPhone for many years to come. Apple makes a lot of money by offering its consumers services. These services include both Apple’s goods, such as Apple Music, Apple TV, News, and others, as well as something as simple as the App Store, where Apple continues to charge developers royalties and take a share of sales.

Throughout the life of their iPhone, an Apple user will spend a lot of money on these services. As long as Apple keeps the device running, the user will try something new — whether Apple Music, purchasing an app or game, using Apple Pay, or something else entirely. From all these transactions, Apple will get its cut, and it’s a lot of money.

Though a few Android manufacturers have attempted to imitate this with their devices, the fact that they run Android means Google already has control. Consider the Samsung Galaxy Note 20 Ultra. It could be easily updated till 2025 based on its specifications. This, however, will not be the case. Because, while Samsung has its own payment system, the majority of customers are likely to utilize Google Pay. While Samsung has its own store called the Galaxy Store, the Play Store will be used by the vast majority of consumers. As a result, Samsung will not profit as much as Apple will from a client who uses its gadget.

Apart from OS security upgrades, Apple should also examine the quality of its semi-products or gadgets, such as Apple Watches. Apple’s unreliability puts a question mark on the Watch OS, let’s discuss it:

Some of the health data acquired by Apple Watches is unreliable, according to researchers, at least when utilized in a research setting. The reason for this is simple: algorithm updates frequently cause the data collected by Apple Watches to alter.

According to research by The Verge, PJ Onnela, an associate professor of biostatistics at Harvard T.H. Chan School of Public Health and developer of the open-source data platform Beiwe, is afraid that the data Apple Watches collect may change when algorithm improvements are rolled out. This mismatch means that researchers can’t trust the information they’re receiving because Apple Watch doesn’t supply raw data to them.

There is also a chance that Apple watchOS will cause you to lose data if it becomes flaky. In this circumstance, a data backup software tool will be required to assure privacy and safety manually if devices are no longer supported by the OEM. It will also help you to access and wipe data on your lost/stolen phone.

A Backup Software Tool for Apple

Data loss can happen to anyone at any moment. That is why it is critical to back up your iPhone on a regular basis. If you are concerned about data loss, now is the time to make a backup of your iPhone data. To deal with this task, you need some reliable software.

The Apple operating system is one of the best software that provides its user a better and smoother experience. But one thing that makes users dislike it is that, unlike other mobile manufacturers like Samsung, Apple doesn’t provide an OS update guarantee in writing. Without that Apple has the authority to stop updating the devices without being questioned.

However, to make sure your data is safe and easily accessible it’s important to always keep a backup. While only depending on iCloud can also cause you problems, for example, you forget your Apple ID password and are unable to recover it. You can use Xnspy the undetectable iPhone spy app as a tool to make data backup that can be accessed from anywhere, anytime.

In case of any further queries, just leave a comment in the section below and you’ll be served as soon as possible.