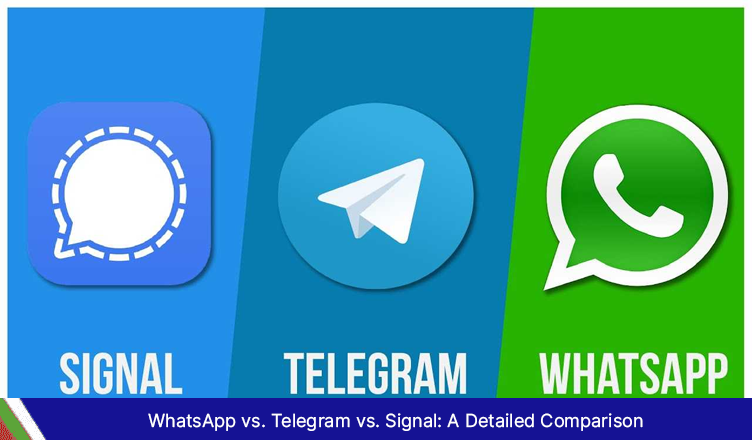 Every time you search for a messaging app on the Play Store or the App Store, a long list of applications pops up on your mobile screen. It might be confusing for a novice to pick one out of many. There are multiple ways to know which one is the best messaging app, like the star rating and comments regarding the app. But nothing proves to be right when it comes to personal requirements.

If you have been on the search for a messaging app, you might be asking yourself which one is the best: WhatsApp, Telegram, or Signal. However, these three messaging applications are surprisingly futuristic and have a high rating, but picking one out of these could race your mind.

In this article, we will thoroughly examine security models of all three messaging services as well as their distinguishing features. Let’s start the comparison to find the best messaging app.

A Detailed Comparison: WhatsApp vs. Telegram vs. Signal

Before discussing other characteristics, I would like to begin with the security first, as it is the most debatable and contentious topic among the three messaging apps. Below, we will discuss how each app developer has tried to make their app secure for their users. But one thing that needs to know is that if you notice any unusual activity with your messaging apps like hanging or unidentified contacts, someone has hacked your phone.

Notably, it is not always the hackers. Although, hacking Android phones is easy enough. Even one of your close friends and family can also hack your phone. You might be thinking, is it even possible? And the answer is, yes.

There are multiple ways to hack someone’s phone, and mobile monitoring software is gaining popularity these days, of which Xnspy is a significant example. What Xnspy does is monitor everything on your phone and save it to an online portal. The person who has installed this spying software can access that stored data from that portal.

Although Xnspy is a parental control app, one that does not like you much would utilize it to hurt you and to make you feel embarrassed in front of everyone.

So let’s start with WhatsApp’s security model first in this battle against Telegram and Signal.

WhatsApp’s end-to-end encryption is one of its biggest selling points, which works with any mode of communication that the app enables. As a result, all of your WhatsApp messages, voice calls, video calls, images, and other content are encrypted end-to-end.

However, it’s worth noting that WhatsApp and Signal messenger also employ the E2E protocol, which was designed by Open Whisper Systems. That’s a good thing, because the Signal protocol is open source, has received a lot of peer review, and is widely regarded as one of the best protocols for implementing end-to-end encryption in messaging services.

What about security features on WhatsApp’s user-facing side? On both the Android and iOS apps, WhatsApp has a built-in app lock feature that allows you to lock your WhatsApp chats with biometrics. Furthermore, the app supports two-factor authentication (2FA), which is excellent for security.

In terms of security, Telegram does provide some protection to its users. The method Telegram uses to encrypt your conversations and other information, however, has several flaws. For example, while Telegram offers end-to-end encryption, it is not enabled by default. Telegram’s private chats feature is the only way to use E2E encryption.

It’s good that messages sent in a secret chat are E2E encrypted, but regular chats aren’t. This means the messages are encrypted on your device before being decrypted on Telegram’s server. The messages are once again encrypted on the server before being delivered to the recipient’s device for decryption. As you can see, Telegram holds the encryption keys on the server-side and can theoretically see your regular chats during this process.

Telegram, like WhatsApp, has a built-in app lock on the user-facing side of things. End-to-end encryption, on the other hand, is rarely present in the app. Because Secret Chats are only for single-user conversation, Telegram groups are not encrypted. Furthermore, on any platform other than macOS, Telegram’s desktop client does not support E2E encryption.

Signal provides end-to-end encryption using the open-source Signal Protocol. Like WhatsApp, Signal’s E2E encryption covers all types of communication. Signal invented a unique mechanism to communicate between the sender and the recipient called Sealed Sender to protect user privacy from all perspectives.

No one—not even Signal—will be able to tell who is messaging whom with Sealed Sender, which is incredible.

Additionally, Signal has some amazing privacy features that will make your messaging experience, even more, private and secure. Signal, for example, can be secured with a passcode or biometrics. Then there’s two-factor authentication, as well as the ability to disable screenshots within the app and the recent screen. Signal recently introduced a new feature that automatically blurs faces before sending images. Isn’t that great?

Now let’s compare the features of these three apps to evaluate which one offers the most to its users.

For the most part, WhatsApp has practically all of the features you would require. You can have up to 256 users in a group chat. You can also broadcast messages to a group of people at the same time.

Voice and video calls are also supported for both individual users and groups. However, you can only have 8 individuals on a group video call at any given moment.

Other than that, WhatsApp has a unique feature that neither Telegram nor Signal has. Yes, I’m referring to WhatsApp Status (also called Stories). Users enjoy this function since it allows them to share their thoughts and feelings with their friends and family.

Moving forward, on WhatsApp, there are some file size restrictions you need to be aware of. The maximum file size for images, videos, and audio files is 16 MB. Documents can, however, be up to 100 MB in size. You may also share your current location with your contacts, which I am sure many users will find useful.

While WhatsApp has the majority of the functionality you’d need, Telegram has an astonishing number of features. You get the same features as WhatsApp, such as chats, group chats, and channels. Unlike WhatsApp, which has a 256-member restriction, Telegram supports groups with up to 200,000 members!

It also includes a variety of group-specific features such as bots, polls, quizzes, hashtags, and much more that may make group experiences much more enjoyable.

The software also has unique features such as self-destructing messages, which are useful if you don’t want messages to remain on the recipient’s device forever. Telegram also provides incredibly granular control over the app’s alerts. Furthermore, the file size limit for Telegram is a massive 1.5 GB.

While Signal easily outperforms Telegram and WhatsApp in terms of security, it falls behind in terms of features. Still, I don’t think there’s anything major missing that would stop you from using the app.

Secure messaging, voice and video chats are available, and all communications are end-to-end secured. You can also form groups, but you won’t be able to send messages to several contacts at once.

You have options like disappearing messages, which are akin to Telegram’s self-destructing communications, and the ability to send a one-time viewable image. However, in my opinion, Signal’s best feature is “Note to Self.”

Aside from that, Signal allows you to transmit voice calls to its servers, keeping your identity hidden from your contacts. The function is similar to what a VPN does.

There are also emojis and privacy stickers, although they are far more limited than on WhatsApp and Telegram. Overall, Signal boasts some of the strongest privacy features, but it may fall short for consumers who demand complete customization.

After checking over everything, it’s clear that Signal is extremely secure and private. If you value your privacy above everything else, Signal is the way to go. When it comes to E2E encryption, WhatsApp is fantastic. However, with the new privacy policy, it’s becoming increasingly difficult for us to recommend WhatsApp to anyone.

Telegram Messenger, on the other hand, may not be the safest option in terms of security. It does, however, come with a slew of capabilities that would make any group admin drool. Telegram also offers end-to-end encryption, but only for secret chats. Therefore if you want more features than the ordinary messenger, I’d recommend Telegram. The signal is a good option if you need basic messaging and calling capabilities as well as a high level of security. With the recent policy modification, WhatsApp appears to be riskier than ever