Xnspy vs. mSpy: The Final Showdown Of The Top Two Spying Apps

Xnspy and mSpy are the two most commonly used spying apps on the internet. They both offer various interesting cell phone spying features, making it hard for the potential users to choose one. While Xnspy is famous for its advanced features, mSpy is also famous for its parental controls. But, the question is: Who gets to be the no. 1 spy app? In order to know the answer, continue reading this our very in-depth comparison review article. Our assessment is based on four different factors: Features, performance, pricing, and compatibility.

Xnspy vs. mSpy – An In-Depth Comparison

Exploring and comparing the features of the two spy apps helps in identifying the diversity of features that are being offered. Both have similar basic features such as call logs and text messages monitoring but they are versatile in their advanced features. Here is a detailed features comparison of Xnspy and mSpy for both Android and iOS devices.

To use Xnspy on an Android device, you need two things: 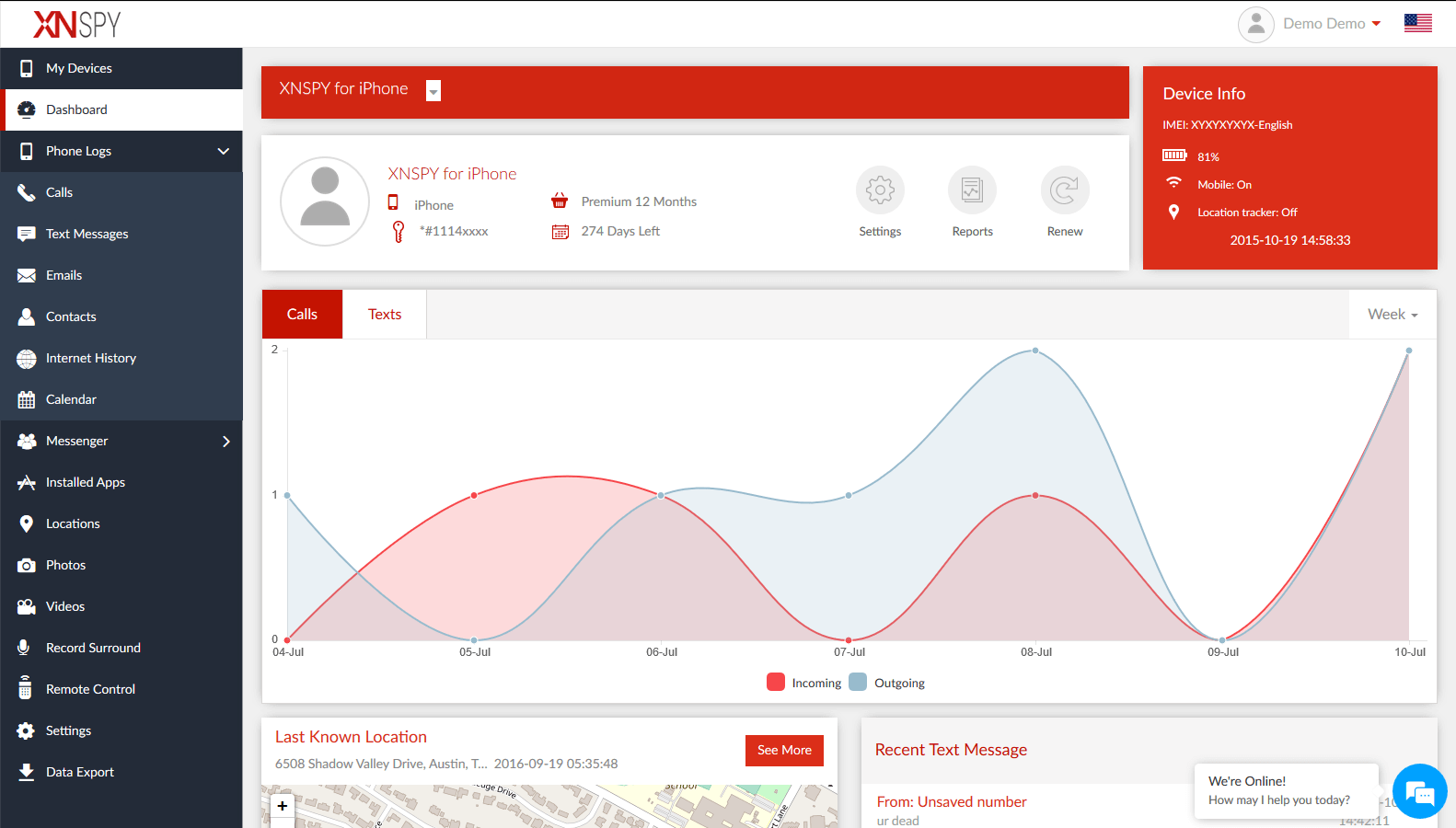 Here are some advanced features that are offered with the premium edition of Xnspy for Android devices along with the basic features.

Xnspy is offering services for both jailbreak and non-jailbroken iOS devices. To use Xnspy on an iOS device, all you need is:

Along with the above-mentioned features, Xnspy offers some additional basic features for jailbroken devices. These features are given below:

Here are some advanced features that are offered with the premium edition of Xnspy for iOS devices with no jailbreak. 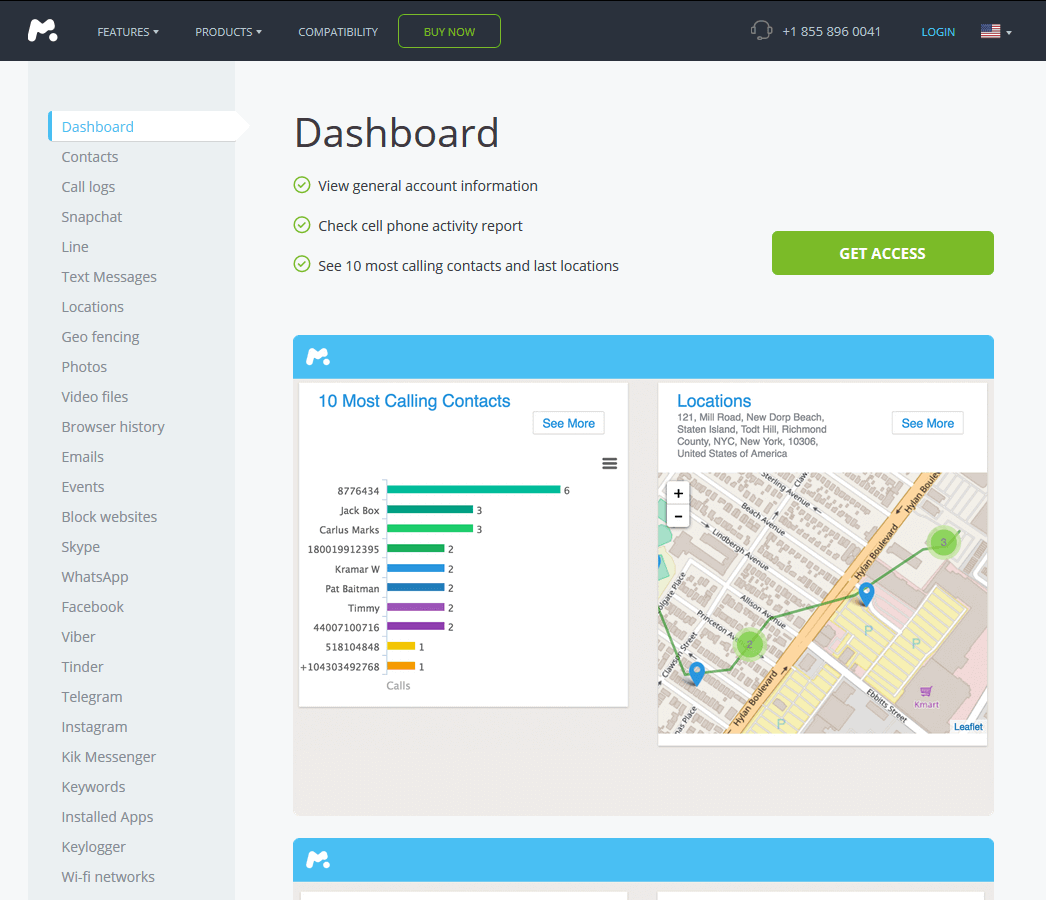 There are few features that are available for the no jailbroken iOS devices. These features are given below:

Along with the aforementioned features, some additional features are offered for jailbroken iOS devices:

Some advanced features are also offered for iOS jailbroken devices.

Hopefully, this comparison table helps you to compare the features of Xnspy and mSpy! 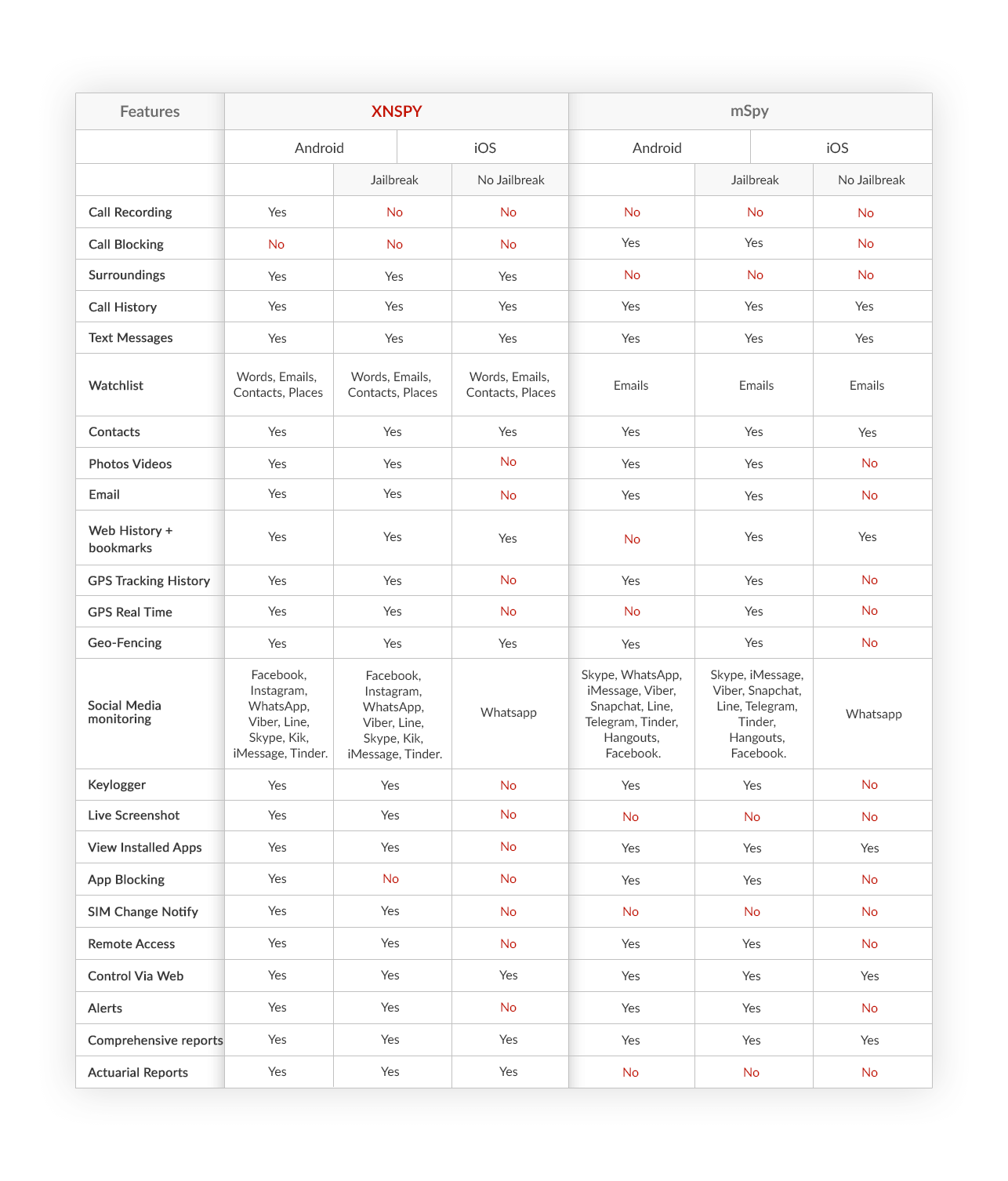 The performance of Xnspy can be analyzed through rating and reviews published on other expert review websites.

Here is the verdict of a popular app reviewing website, Top Ten Reviews.com about Xnspy: “XNSPY is a good choice for monitoring your child’s phone and internet activity. However, you should look elsewhere if you want to control when and how long they can use their device.”

This is what another app reviewing website, PCMAG.com has to say: “When you think of parental control apps, you probably picture keeping youngsters away from nasty websites and controlling how much time they spend online. Most of these apps also generate activity reports for parents, and many offer real-time notification of any abuses. Xnspy (for iPhone) doesn't try to control what your child does. It sticks to monitoring the child's activity undetectably. If spying on your kids suits you, and you don't need real-time reporting, Xnspy could be what you need.”

Xnspy has thousands of customers. According to SiteJabber, Xnspy is the best spy app available in the market with an average rating of 3.6 out of 5.

This is what the customers have to say about Xnspy:

“No lies or fake promises-It's feels great to finally have a decent spyware app that's free of BS. Great work, team Xnspy! I have wasted enough money already on these apps and I was going to go very nasty in my review if this app hadn't worked either. But, that didn't happen and I am very happy!” – Stephen W

“I love this new culture of transparency at my firm that came along with the installation of Xnspy on all of the company-provided smartphones. Now I know exactly what my employees do on their cell phones during work hours.” – Alex Carpenter

Here is the verdict of app reviewing website, Top Ten Reviews.com about mSpy: “mSpy is an effective monitoring program that works on both computers and mobile devices, plus gives you detailed insights into your child’s online activity. However, it is expensive.”

mSpy has a large number of customers but going through the evaluations of these customers on the top rated websites, I have mentioned reviews of a few unsatisfied customers below:

“Poor Product, Non-existent customer service: Purchased the app in an attempt to track Snapchat on an iPhone of one of out children. After purchasing was told that Snapchat was not available - could only track text messages and browser history. Requested a refund 1 day after purchasing and the company has refused to refund, claiming their website disclosed this. Unless your looking to only track texts and internet, I would absolutely steer clear. Customer service is non-existent." – Tony Keeler

“Worst tech Support: Does not work well with iPhone (not jailbroken). Customer support is the worst, and just gives you the run around (ask you to remove and re-install device, then wait for hours for data that doesn't show; then, next chat person tells you to do the same). After 3 days of doing this, now I cannot login, cannot chat (my id and IP address have been blocked). Called number on site, and person just hung up on me before I could even ask for tech support number. Definitely do not recommend!!!!” – Mauro M

Performance is one of the key factors that help in making a decision in comparing the two apps. It is clear that mSpy has a large number of customers but the fact isn’t ignorable that Xnspy being relatively new in the spying app market has gained more popularity. The basic reason behind this rising fame is the high rate of satisfaction among the customers.

Most of the app rating sites have criticized mSpy for being unreasonably overpriced as compared to the offered features. The rating and comments of the customers on the famous reviewing sites also show that Xnspy is doing much better as compared to mSpy. The customers appreciate the performance of Xnspy offering all the promised features as well as providing customer support service.

Whenever you need to buy a spyware program, either for Android or iOS, pricing is one of the essential factors you should be looking at. Who doesn’t want to get the best stuff at the best rates? There are spying apps that are even charging over $100 for only a month’s subscription.

Xnspy is offering its finest service at a quite reasonable price. Though you may say that Xnspy isn’t the cheapest app available in the spying app market but, it’s offering the best deal for the long-term users. You can get the most suitable pricing package if you want to use it for more than a few months.

Xnspy is offering two pricing packages for Android OS and iOS: Basic and Premium. These two editions differ in prices based on the features they offer.

For the Basic edition, mSpy is offering only a monthly package. If you want to get a monthly subscription, you will be charged $29.99 per month for both Android and iOS.

Here is a summary table for you to compare the prices of the two most commonly used spying apps. You can observe that Xnspy is offering more features with a premium subscription for both Android and iOS users at a relatively lower price than mSpy. So, Xnspy seems to be comparatively cheaper than mSpy for the customers.

Before buying a spying app, It’s important to check whether the device you want to monitor is compatible with the selected spying app or not.

Both Xnspy and mSpy have held the top two spots interchangeably for too long. But guess it’s time to declare one absolute winner once and for all. MSpy comes with a neat online interface and some great features but, it’s been a while since they have come up with something new.

To look into this, we went through mSpy’s year-old online reviews for any missing features that the app may have on its current version. Interestingly, it still was the same app a year ago. Xnspy, however, has introduced a couple of good features just alone in the year 2018-19. For instance, the aforementioned Call Time Activity Punch Card, Top 5 Callers, Top 5 Call Durations, Top 10 Most Frequently Visited Websites, all of these reporting features were added recently to bring in a more efficient spying experience where users won’t have to sift through immense amounts of data that are being saved on a monitored device on an everyday basis. Apart from the features and upgrades, Xnspy is also priced lowest in spyware programs industry. The prices are unbeatable and definitely worth every penny of yours. We also loved the 24/7 customer support on Xnspy as they do everything within their capacity to help you out. We do think that mSpy is a great app but Xnspy certainly has more tricks up its sleeves and hence deserves the number 1 spot on the list of best mobile spyware programs.