Xnspy Vs. TheTruthSpy: Who’s the winner?

Spying usually isn’t considered a healthy and positive activity or unless it is done to prevent someone (or yourself) from unfortunate misdeeds or incidents. With the intention of protecting loved ones, various companies have developed spying apps offering a variety of features. There’s a lot of junk spy apps available in the market which has made this selection quite challenging. In this review article, we are going to assess the two best spying apps: Xnspy and TheTruthSpy. Our evaluation isn’t generic rather based on five basic comparison factors: Installation, compatibility, pricing, features, and performance.

Xnspy is an easy to install software with a user-friendly interface. All you need is a subscription and physical access to the monitored device. In case of non-jailbroken iOS devices, you need iPhone credentials of the device along with the subscription plan. Once you have have subscribed to Xnspy, you will receive a follow-up e-mail to download the software. After the installation, you are all set to track the activities of the monitored device through a web-based control panel.

Xnspy and TheTruthSpy both are easy-to-install applications. Both spy applications are user-friendly and have an interactive web-based control panel. However, we found that Xnspy provides a much easier setup with its side-by-side installation guide. There’s no way you could find yourself stuck while setting up Xnspy; the same can’t be said for TheTruthSpy.

Compatibility is the first and foremost factor that helps a customer in the decision-making process. Without ensuring that your device is compatible with the application, you can’t go with buying a spyware program.

Most of the mobile monitoring applications proffer their services at high prices not realizing that it’s the single-most important factor when it comes customers making a purchase decision. Let’s what these spyware programs are taking from us for their services.

For the basic subscription, there is a slight difference in the prices of the two spying apps. Looking at the basic subscription charges, you may say that Xnspy isn’t the cheapest app. But, it is offering the best pricing plans for long-term customers. TheTruthSpy offers fewer features with the basic edition as compared to Xnspy. Additionally, the prices of Xnspy reduces with an increase in the number of subscription months. So, if you want to use spyware for more than a few months, Xnspy has the most reasonable subscription plan for you.

Xnspy proffers its services for both jailbroken and non-jailbroken devices including iPhones, iPads, and iPods.

TheTruthSpy offers all the above-mentioned features for both Android and iOS devices. But, it offers service for iOS jailbroken devices only. Non-jailbroken iOS devices are not compatible with TheTruthSpy. 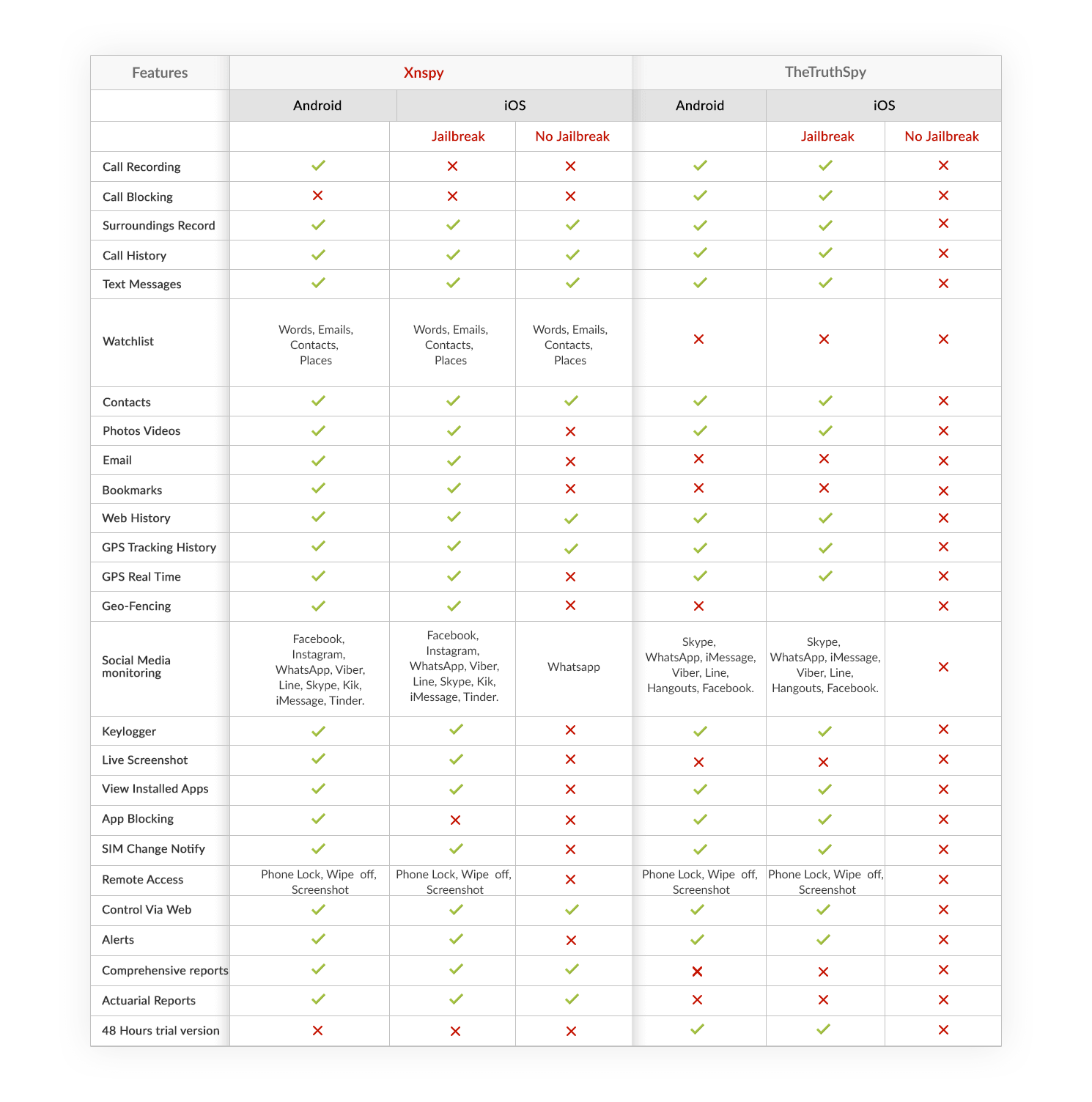 In terms of features, Xnspy beats TheTruthSpy by offering more features for both its basic and premium users. The incompatibility of TheTruthSpy with non-jailbroken iOS devices makes it less popular. TheTruthSpy proffers limited features for the basic subscription plan as compared to Xnspy. However, as aforesaid, it charges a lot even for the basic plan. To access the monitored device remotely, you have to send text commands using TheTruthSpy app which can make a person suspicious. TheTruthSpy also lacks the ability to track emails. Xnspy leads TheTruthSpy by facilitating the users with more advanced features like geo-fencing, comprehensive graphical reports, Wi-Fi network logs, and watchlist alerts for words, contacts, emails, and places.

The reviews are the best way to analyze the performance of an application. Here we are going to compare the performance of two spying apps, Xnspy and TheTruthSpy. For the comparison purpose, I have mentioned reviews from the experts as well as the customers.

“It competes directly with Flexispy because of the recording features but at a substantially lower cost. If cost is an issue and you really need call recording – this one is worth considering. It also covers features available from mSpy – although not just as many – and they have the No Jailbreak system for iPhone users. In fact if cost is a major issue for you XNSPY is the lowest priced spy app that I list on the site. I wouldn’t give it a recommendation based on price alone – it still needs to work, and it does.”

A renowned app reviewing website, Trust Pilot gives TheTruthSpy a rating of 5.5 out of 10. While another expert review website, Review Spy apps says: “Though, TheTruthSpy is a highly efficient spy software that presents an array of both basic and advanced features, the app scores low on the technical assistance front, as the only mode to communicate is through generating a request ticket on their official site. In addition, some of these features, which increases the cost of this spy product are some of useful, dull features.”

On the reviewing website Site Jabber, one of the Xnspy customers has shared feedback:

“I am using XNSPY from almost 6 months and I face a lot of difficulties in the start to make this app work but failed every time. I want to appreciate the support staff the way they helped me in that time. They all helped me to get it fixed. But Katie Ford is the one who helped me last time with the installation and believe me. Its never stopped working from last 3 months and I really appreciated her knowledge for the phones. Seriously Katie people like you are hard to find and lucky to have. I will suggest EVERYONE to contact her to solve your issues. She is the master of this monitoring stuff.” – Louis B

You can read the reviews of real-time customers of Xnspy from their official website, too. I have mentioned a few here:

“My children were not allowed to go to this summer concert in our city, but I had a feeling they would try anyway. Thankfully, XNSPY gives me alert on specific words, so I went ahead and put in “concert”. Caught my kids sneaking out just in time.” – Camilla Sanchez

“If I did not have XNSPY on my phone I probably would’ve lost my job by now. I forgot my phone at Starbucks and I wouldn’t have panicked like crazy if my inbox didn’t contain emails from traders. So I just locked vice-versa phone with XNSPY to be sure no one would open it even if they tried. Who knew what would have happened if it went in the wrong hands!” – Natasha Brunelli

Here is what a customer has reviewed about TheTruthSpy on a famous reviewing website, Trust Pilot:

“Very Bad experience with there after sales service,tried to contact them on there support at TheTruthSpy.com and its just send feedback as complaint received, then no action.tried so many times,I think They have no service team only just a product with server. worst experience with the truthspy support,” – Bimal Chandran

Cell Spy Apps is another well-known website where a customer has posted about TheTruthSpy:

“I am so dissatisfied. I did the free trial. It worked for a few days. Then when I decided to purchase the Premium package it never worked. Until today it has been 6 days since it was updated. My money was taken but no activity. Please refund my money.” – George Jones

Xnspy and TheTruthSpy are two amazing spying apps with a large number of customers across the globe. But now we have to affirm a winner for all time. TheTruthSpy provides a 48-hour trial version along with a user-friendly interface but, it isn’t compatible with the latest OS devices, and especially if you have an iOS device, you should really pass the idea of subscribing to TheTruthSpy because unlike Xnspy, TheTruthSpy doesn’t have a non-jailbreak version.

On the other hand, Xnspy keeps its software up-to-date by offering high compatibility and advanced features. The advanced features like geo-fencing, remote access to wipe off data, live remote screenshots, watch lists for contacts, words, emails, etc. make Xnspy superior over TheTruthSpy in many ways. Xnspy is providing the customers with detailed actuarial reports which also attract the attention of many experts. Thus, what makes Xnspy the no. 1 spy app is its features, compatibility, and pricing. Xnspy’s top notch customer support service is also referred to be more efficient than TheTruthSpy. That’s why Xnspy has been tagged as the best spy app for both Android and iOS devices by many review portals.